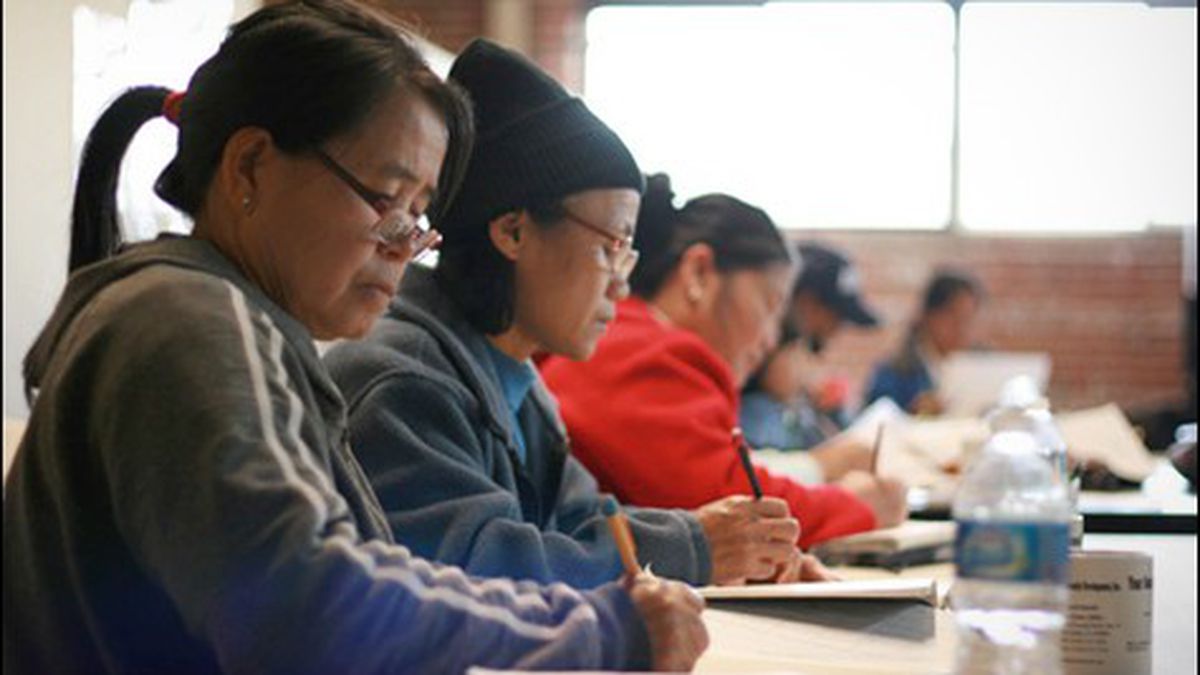 A new report shows that Oakland's refugees from Burma are stuck in extreme poverty, with up to 80 percent unemployment.

Hae Htoo lives in a one-bedroom unit in East Oakland with five other family members. The twenty-year-old arrived in the US six months ago and hopes to learn English and find a job. But a recent report by San Francisco State University and nonprofit Burma Family Refugee Network shows that refugees from Burma who now live in Oakland, such as Hae Htoo, are facing dire circumstances. Most arrived in the US during a severe recession and have little to no English skills.

“The recession is nationwide,” noted Russell Jeung, SF State professor of Asian American Studies, who led the project. “The difference with Oakland is that it’s hit harder by the recession, has even more unemployment and less jobs.”

An estimated 84,000 refugees originally from Burma have made the US their new home since 2007. About seven hundred have resettled in Oakland. Karen, Karenni, and other ethnic minorities make up the majority of these refugees. Many fled Burma, now Myanmar, to escape military attacks and persecution and lingered in Thai refugee camps or in Malaysia for years. Those accepted to come to the US receive a few days of cultural orientation before boarding a plane.

The community-based research project found that 57 percent of Oakland’s Burmese refugees live in extreme poverty, 63 percent are unemployed, and 64 percent have poor or no English skills, even though some have been in the US for four years. Among Karenni, 81 percent reported that they are unemployed, 90 percent live in extreme poverty, and 90 percent have no high school education. The first wave of Karenni refugees arrived in 2009, so there was no existing network.

Of the nearly two hundred people surveyed, the majority are living in extreme poverty, with an income of less than $1,000 a month for a family of five. Those surveyed say their top needs are English classes, interpretation, and healthcare. More than two hundred students in Asian American Studies classes helped administer the surveys as part of a class. The surveys were conducted at health fairs with Burmese, Karen, and Karenni and other interpreters, and the answers are self-stated.

Some who work with the population say the unemployment rates in the report are higher than what they’ve experienced. Kathy Chao Rothberg, executive director of Lao Family Community Development Inc., a nonprofit that assists refugees and other job seekers, worked with about one hundred Burmese refugees in Oakland last year. The organization is able to place the majority of job seekers. “They still can get a job as long as they’re willing to do it,” said employment director Mai Quach. Jobs are in retail such as at Wal-Mart, or in manufacturing, laundry, or food services, and mostly pay just above the minimum wage of $8. The organization has close relationships with many employers and assists with on-the-job training. Most refugees learn about Lao Family through word of mouth.

But even those employed are living in poverty — 75 percent, according to the report — since jobs may be short-term, part-time, and low-wage. The study also found that some people eligible for welfare were not on it. Another paradox is that 90 percent said they had doctors, but healthcare was still one of their top problems, due to the language barrier. “Even though they have doctors and insurance, they still don’t get healthcare,” said Jeung. “They didn’t understand how to get an appointment, or if they are given a prescription, how to take their drugs.”

Due to a mix up, one woman was referred to get an abortion when she wanted to continue the pregnancy. Her interpreter was Burmese while she was Karen. Some Karen and Karenni only speak their native tongue and not Burmese, or have a hard time understanding Burmese. Fortunately, they were able to catch the misunderstanding in time.

In another case, one man had glaucoma but had to wait for several months for his MediCal to process. The delayed surgery left him nearly blind in one eye.

Kwee Say, a community health specialist at Asian Health Services who speaks Karen and Burmese, said that the highest need population may be elderly Karenni who speak neither Karen nor Burmese. Say is one of two Karen-speaking medical interpreters in Alameda County. There may be no Karenni medical interpreter.

Hae Htoo gave birth to a newborn daughter just two months ago. That morning, she felt contractions but wasn’t sure if she was going into labor. By the time she was ready to give birth, she could not find a ride to the hospital. She gave birth in the bathroom; her husband caught the baby.

After giving birth, her neighbor was told, through a phone call with Say, to call 911. Following the 911 operator’s instructions as translated by the neighbor, Hae’s husband tied one of his shoelaces around the umbilical cord and waited for an ambulance. “I was not scared at all,” said the soft-spoken Htoo. Their baby is healthy.

Mental health is also an issue; more than 70 percent reported stressors that impaired them. (The survey included culturally appropriate answers such as feeling “heaviness” or “head is hot,” mental states that prevent someone from focusing or being able to work). Jeung said mental health issues stem from both war trauma and the acculturative stress of having to adapt to a new land.

Learning English is a top priority, since without it, people have to rely on translators to go with them everywhere and to get anything done.

On a Thursday morning at Lao Family’s vocational ESL class — one of the only remaining adult ESL classes left in Oakland — seventy students practiced speaking English and writing things down in a calendar with teacher Ann Colten and a volunteer teacher who speaks Karen and Karenni. More than half the class is from Burma. For some, English is their third or fourth language.

More than one hundred people are on the waiting list. Oakland’s adult classes were slashed by nearly 90 percent in 2011 because of statewide budget cuts. “I want to learn English and find a good job,” Yi Yi Win, who is Burmese Rakhine, said through a translator. “I want to be self-sufficient, and I want my child to be educated.”

Though the numbers in the report are bleak, there have been small steps forward. Since October 2011, the US State Department has more than doubled funding for initial resettlement from $900 to $1,850 per person for their first three months of life in the US: $725 goes to staff salaries and operating expenses at places like the International Rescue Committee, a nongovernmental organization that has a contract with the State Department to resettle refugees, and $1,125 goes to families for rent, furniture, and spending money. It was the most significant increase in about thirty years, noted Ken Briggs, interim executive director of the International Rescue Committee in Northern California, and the funding is just for the three months.

Other strengths include the Oakland community, which has a history of refugee resettlement. “This is an incredible place, resource-rich,” said Briggs, who is from Arizona. “I think if we pull together, we can make a greater impact.”

Briggs and Rothberg both agree in general that the population’s needs could be better served. Places like the International Rescue Committee, which has resettled the majority of Burmese refugees in Oakland, along with Catholic Charities of the East Bay, are the initial points of contact with refugees, finding housing for them and picking them up from the airport. But after a few months, refugees must find assistance elsewhere. Some fall through the cracks. The report recommends a “one-stop” location where many of the services are together since access to translation, transportation, and money is a barrier to service.

Briggs hopes the International Rescue Committee will be able to offer long-term case management in the future (the Oakland office currently has three full-time direct-service staff). “I would like to see services within the resettlement agencies that provides support for a longer period [than six months], particularly with job search and case management.”

In the meantime, some cannot wait. Social services continue to be cut. Even if refugees qualify for MediCal food stamps, that doesn’t cover rent, transportation, and basic utilities. Some families with children are eligible for welfare or CalWorks. The lifetime cap was recently cut from five to four years. Others are eligible for General Assistance or Supplemental Security Income, both of which are extremely low.

Most are eager to work. “I want to stand on my own two feet and not rely on government assistance,” said Yi Yi Win, a mother of one who arrived just three months ago.

But Hae Htoo, a mother of three who arrived six months ago, is worried. Her husband will be laid off from his bakery job in three months. “I am worried we won’t be able to pay rent and bills,” she said in her native Karen through an interpreter. She lives in a one-bedroom apartment with her husband, brother, and three children.

Zar Ni Maung, co-founder of the Burma Family Refugee Network, said that even folks who have been here since 2007 still struggle. Some are exhausting their CalWorks lifetime benefits. He fears some refugees will remain a permanent, poverty-stricken underclass.

“They’ve been here long-term now,” he said. “Who’s going to pay for their rent? Who is helping them find a job? A lot of people have been placed [in jobs], but they do not continue going to work or have been laid off. Nobody seems to be looking into why this is happening. They don’t have skills. The issues are here. How are we going to fix it?”

To read the report, go to CCI.sfsu.edu/cueprojects

Quan Brings All Parties to the Table

Prevention of Alzheimer’s Could Hinge on Marijuana Science