Before the smoke had even cleared from an unprecedented police raid last Wednesday, November 23, the 24th annual High Times Cannabis Cup in Amsterdam concluded with a concert and the annual awards ceremony.

On Wednesday, Amsterdam police conducted a massive, 100-officer raid at the Cup’s venue, Borchland. Possession of marijuana has been decriminalized in the Netherlands, but according to tweets on the scene, from Dana Larsen, Director of the Vancouver Cannabis Dispensary Society, “Police officer told me they investigated yesterday, saw some booths giving out weed and breaking other rules. So now the event is shut down. … Everyone has to leave except for exhibitors. Cops are friendly and polite.”

David Holland, event counsel for High Times, later told the Express via our online comments section that “this started over a misunderstanding about a permit application filed by the venue to host the event. Police are ensuring that all vendors are in compliance with the 500 gram limit under the Opium Law for licensed vendors at the venue. Only one vendor has been identified as potentially over the limit, but only slightly.” 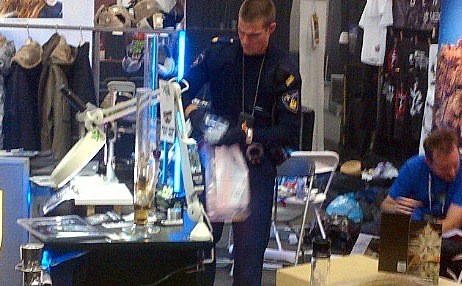 High Times says police arrested and released one female, Mila, “the hash queen of Amsterdam” for excess hash. No attendees were arrested. Still — a serious show of force since Conservatives took power in the Netherlands and shut down weed tourism to the south of the country

Here are the award winners — including the East Bay’s own Debby Goldsberry, formerly of BPG — from a High Times press release:

Facebook
Twitter
Previous articleMonday Must Read: Occupy UC Protests Today in SF and Davis; Tax on One Percent Pushed By One Percent
Next articleDrake Was Here — and Can Teleport, Apparently
18,637FansLike
0FollowersFollow
67,429FollowersFollow