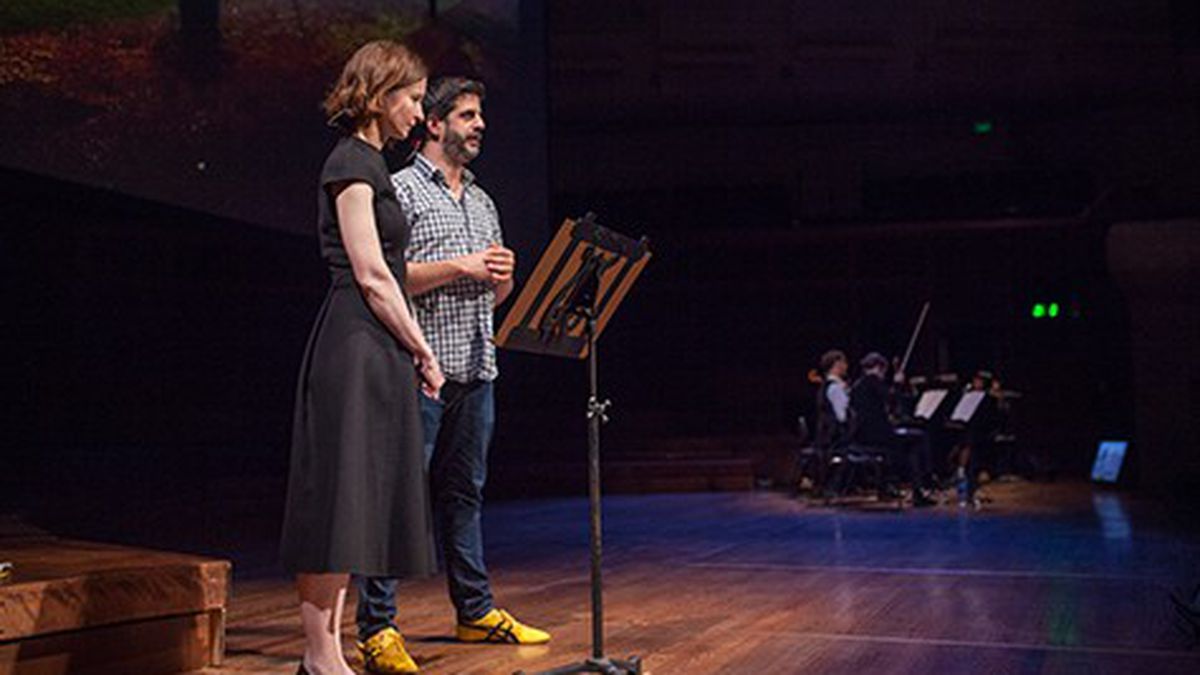 Pop-Up Magazine presents its organizers with an unusual publicity problem. When I interviewed Derek Fagerstrom, the co-creative director of the San Francisco-based, live long-form journalism show run by the folks behind The California Sunday Magazine, he was willing to talk at length about the show’s production, but refused to give any detail regarding its content. Apologetically, he explained that one of the crucial characteristics of Pop-Up Magazine is that the audience is always surprised by the program. Although other producers would likely compromise that standard for the sake of press, those behind Pop-Up Magazine are dedicated to their storytelling ideals — and actually appear inclined to take risks in order to uphold them.

Pop-Up and California Sunday editor-in-chief Douglas McGray founded the show in 2009, with help from Fagerstrom and his co-creative director Lauren Smith, as a push back against the sentiment that long-form journalism is a dying art form. As the friends watched many of their favorite magazines fold, they wanted to reinvigorate the medium — by literally bringing a magazine to life.

Every Pop-Up Magazine show features around fifteen presenters — writers, filmmakers, radio producers, professors — telling stories they are personally invested in. (Last season, the presentations ranged from an intimate story about the way artist Barry McGee mourned the death of his wife Margaret Kilgallen to research on the under-diagnosis of autism.) Each presentation is specially produced to relay its narrative, often using media considered unconventional for journalism. Some involve slideshows or informational animations, while others include film clips, and all are accompanied by an original score performed by a live orchestra that travels across the country with the show.

And there’s one other crucial feature: The show is never recorded or photographed. To experience the stories, you must be physically present. “If you’re not there, you miss it, and you don’t experience it, and you have to ask a friend who went and have them tell you the story,” said Fagerstrom. “It’s a bit about a different approach to storytelling, one that’s more intimate, that’s more social.”

After starting off as an experiment, with its first show at the relatively small Brava Theater in San Francisco, Pop-Up Magazine now regularly sells out shows across the country. And on Wednesday, April 13, it will be coming to Oakland for the first time for a show at the historic Paramount Theatre (2025 Broadway).

The lineup for this season features influential photographer Katy Grannan, New York Times Magazine and This American Life contributor Jack Hitt, and photographer and stop motion artist Joel Strong — popular for placing tiny cutouts of celebrity mugs over people’s faces in photos. But one of the most unorthodox contributions will come from Samin Nosrat, a Berkeley-based author and chef.

Nosrat is exactly the sort of niche, multidisciplinary creator that Pop-Up Magazine producers seem to salivate over. While studying English at UC Berkeley as an undergrad, she began cooking at Alice Waters’ esteemed Chez Panisse. And during her tenure in its kitchen, she also picked up an interest in the work of Michael Pollan — specifically his food-related reporting such as The Botany of Desire. Soon enough, Nosrat weaseled her way into one of Pollan’s courses on food reporting at the UC Berkeley Graduate School of Journalism.

Eventually, Pollan became a close writing mentor for Nosrat, and in exchange, she taught him how to cook — a relationship he wrote about in his most recent book, Cooked. Now, Nosrat is finishing up a culinary book of her own.

Nosrat’s first piece for Pop-Up Magazine was an investigation into a subculture of Iranian teenagers who hold dinner parties to try international dishes that are difficult for them to find locally. Her second collaboration with Pop-Up was more ambitious: An entire “issue” in the form of a dinner party at which each course and all of the table settings were paired with one of the stories being presented. (For example, the East Bay ceramicist who made the dishes told a tale about tracing back where the clay he used came from, and making the devastating discovery that it was a byproduct of fracking.)

“[Pop-Up producers] are willing to consider any way of telling a story that’s going to be the most powerful and impactful in a room,” said Nosrat in a recent interview, “which allows you to explore all of your senses and to engage all of your senses and to use tools and factors that you can’t when you’re just reading a story on a page. Cooking is all about the senses, and isn’t that all that a dinner is? You’re telling people a story.”

Both Nosrat and Fagerstrom described the dinner as an impractical experiment. But Nosrat’s piece for the April 12 show sounds like even more of a technical challenge — from what she could share. Apparently, she pitched the food-related story to a number of editors at publications including the New York Times, all of whom responded that the idea was fascinating, but the execution would be too difficult. Pop-Up Magazine, on the other hand, immediately committed to figuring out the logistics. “Because we have the luxury of the in-person experience and we have the luxury of appealing to multiple senses and because they’re crazy like me, I think we were able to find a way that made sense for this story, which is an interesting one that kind of didn’t work in any other medium.”

Nosrat said that in order to produce her presentation, they’ve had to assemble a small army of volunteers to create a handmade experience for every member of the audience — which at the Paramount, will be 3,000.

“I have crazy ideas and I’m like, ‘Let’s try to do this insane thing for however many people!'” said Nosrat. “And a lot of times, it doesn’t work, or it just causes insane amounts of stress … but the crazy thing about the Pop-Up people is that they’re even crazier than I am, and more ambitious.”