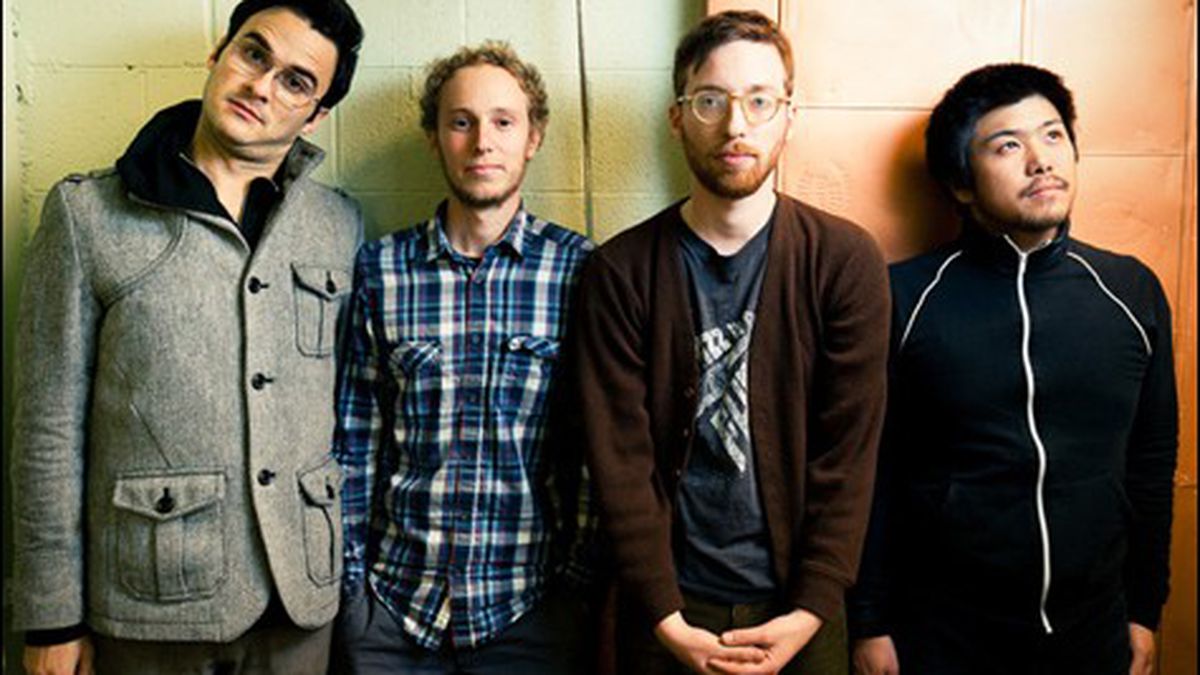 With three days to go before a rather high-profile gig at the Rickshaw Stop, the four members of local indie pop four-tet Kapowski were just starting to prepare their material: a new arrangement of “Place to Be” from Nick Drake’s vastly-underappreciated 1971 album Pink Moon. They were gathered in a small Jack London Square rehearsal studio, just two blocks away from what appeared to be a pretty raucous indoor rave at the Oakland Metro Operahouse. The band members appeared to have no knowledge of it. The night was cold and quiet on their side of the street, and the studio walls blotted out all ambient sound. Frontman Jesse Rimler sat at a small desktop computer, searching for an audio clip of the Drake song on YouTube. When he found one, he leaned back in his chair, gazing studiously at the black-and-white photo of a then-23 year-old rock star. Guitar arpeggios percolated through the stereo speakers.

“Place to Be” has a very basic chorus-verse structure, but its melody lines are quick and dense. Keyboardist Michael Coleman nodded as he plunked them out on an electric Wurlitzer. Bassist Jon Gondo added scaffolding, while drummer Sam Ospovat scraped the rims of his cymbals. Rimler, who also plays keyboards, closed his eyes as he sang the opening lyric: When I was younger, younger than before … He tapped the beat in triplets on his pant leg.

It would take Kapowski the better part of an evening to get “Place to Be” exactly to its liking, with a shifting rhythm and a few added piano interludes. But the band eventually came up with a rendition that suited its character: bubbly and accessible, and at the same time winkingly abstruse. The Rickshaw Stop gig, which would feature roughly a dozen similarly-themed groups, all playing reinterpretations of songs from Pink Moon, not only established Kapowski as being a band of note in the avant-music community — it also showed its niche market.

Coleman, who chafes against terms like “avant,” tried to characterize the band in an email: “We are as pop as can be, even though we are weird.” But even he might concede that the term “pop” can seem rather contentious.

And it’s a strange label to foist on musicians who, for better or worse, are actually refugees from the free-jazz and experimental music communities. Coleman’s other projects provide a good sense of his musical pedigree. He used to helm the group Schumann’s Humans, whose entire repertoire spawned from 19th-century composer Robert Schumann. As a student at Oberlin College, he also played in a noise-rock band called Screaming Death Machine, which had the audacity to cover Mahler’s Ulricht symphony. A few years ago he and Ospovat launched the indie rock trio Beep! with tUnE-yArDs bassist Nate Brenner. Though they made a valiant effort to break through the art-school mold, their music still sounded incredibly studied and considered by rock standards.

The other members of Kapowski are similarly groomed. Rimler and Gondo attended middle school together in Pleasant Hill, and they’ve played in bands since then. Rimler says he initially accosted Gondo on a school bus because he thought they were kindred spirits. Which is to say, Gondo wore a perpetual scowl and Rimler thought that being mad at the world was an appealing quality. Not to mention they both suffered from guy angst.

“We were stuffed in the locker side by side,” Rimler joked. He nodded toward Gondo, who didn’t look up from his bass. “He was really angry,” Rimler said.

Evidently, the two of them figured out how to use anger as an artistic muse. They’ve spent the last decade and a half in various musical collaborations, even though Rimler was never classically trained — he’s currently learning to read music from another friend, saxophonist Jacob Zimmerman. Kapowski came about two years ago, originally with Rimler’s brother Jacob on drums — the name either derived from Saved By the Bell babe Kelly Kapowski, or from comic book violence bubbles that say things like “BAM,” “WHAP,” and “KAPOW.” (“It’s up for debate,” Coleman said.) Set up as a piano-bass-drums trio, the project became far more interesting with the addition of Coleman and Ospovat. The two-piano format allowed for plump chords, interlocking melodies, and a much richer texture than you’d normally hear from an indie rock band. Kapowski’s new album, Boy Detective, is notable both for its tight songcraft and for the detail in its arrangements. The one thing that Rimler has in common with Nick Drake is that he’s able to float over any kind of orchestration, never conscious that his voice is the main element.

Rimler, who is rail-thin, bearded, and bespectacled, and who works as a program coordinator at the Berkeley Jazzschool, is responsible for most of the songwriting in Kapowski. For someone who always learned by rote, and who, by his own admission, was shamed out of the music department at UC San Diego, he’s a fascinating composer. The songs on Boy Detective may use ear-wormy chord patterns and traditional pop structure, but they usually come with at least one or two bizarre adornments — like the gargling keyboard trill on “Look Alive.”

A lot of those frills sound improvised, and it’s easy to see why if you ever get a chance to eavesdrop on the band’s rehearsal process. Coleman led the one for the Nick Drake tune, playing the melody on his keyboard while Ospovat stared fixedly at his drums. Rimler tapped the downbeats on his leg. Ospovat ran a finger along the edge of his snare, creating a barely discernible atmospheric scratch. Coleman had asked him to set up a weird, shifty polyrhythm that would highlight the static nature of the vocal. After running through the first verse once, they paused to tweak the arrangement. Gondo’s bass needed an extra layer of fuzz. Ospovat envisioned something a little more “percussiony,” but also worried about it being “muddy-sounding.”

Coleman addressed the group: “I’ve been on this new tip, where I put everything in, and then I take everything out — and then I’m left with maybe just two things,” he said matter-of-factly. The others nodded, apparently used to conversing in abstract terms. Rimler later explained how they’ve implemented this process of saturation and condensation. “I generally come in with the initial idea for a song, and a few parts and lyrics,” he wrote in an email. “Then we arrange it together as a group.” That’s where the rococo flourishes come in — an added blues run, a cymbal scrape, or Coleman getting inside a grand piano and plucking the strings with his fingers. The musicians blend all their ideas together, then begin the process of whittling and refining in the studio. By the time they perform the material live, everything is fully conceived and stripped down to a lean finish, Rimler said. Save for one keyboard solo on the song “A Bothering Man,” they seldom improvise.

Perhaps that’s what makes Kapowski a pop band, albeit a somewhat arty pop band. Or perhaps it’s Rimler’s influences, which include such older-style Tin Pan Alley songwriters as Cole Porter and George Gershwin, along with their less-known descendants — English rocker Ray Davies, pianist Randy Newman, the late Judee Sill. Like Kapowski, they all fall under the broad “pop” category, he indicated. Even if they weren’t that popular.

Alameda’s Measure B Loses By 70 Points

Undocumented Artists Spotlighted in a New Exhibit at CultureStrike in Oakland

Your Daily Lick: Sleep Your Excellence