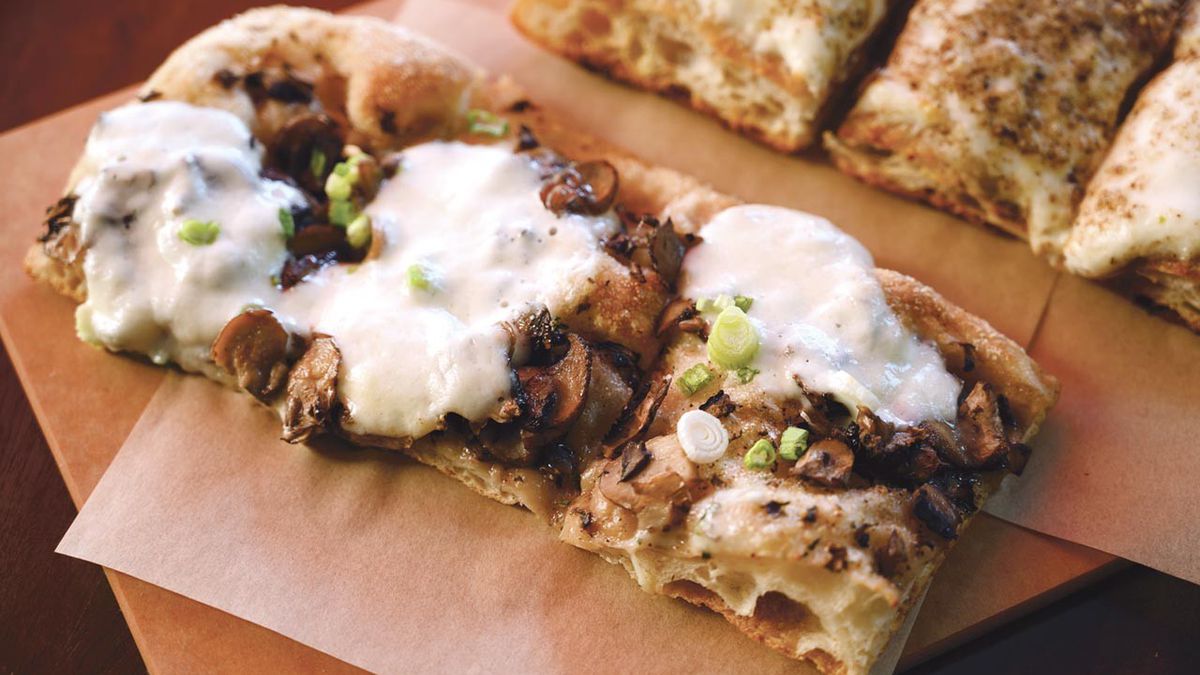 Pollara Pizza Brings Rome by the Slice to Fourth Street

This square-shaped pizza al taglio is surprisingly light and crisp.

It should come as no surprise that pizza is serious business in Italy. And when most of us think of Italian-style pizza, we think of a steering wheel-sized personal pizza hot out of a wood-fired oven, its thin crust flecked with crunchy, burnt spots.

This kind of pizza that Americans so frequently associate with Italy is Neapolitan-style pizza, and for good reason: Pizza as we know it today originated in Naples. But pizza, like so many other foods, is regional. In the United States, we’ve got New York thin crust, Detroit-style square pizza, and Chicago deep dish, and if the East Bay were to have a definitive pizza style, it’d probably be the veggie-topped pizzas from the Cheese Board, Arizmendi, and Sliver.

Likewise, Italy’s capital city has its own styles of pizza. One of its signature styles is square-shaped pizza al taglio, which means pizza by the slice.

Jon Smulewitz, who along with his wife, Katya, owns 14-year-old Oakland Sicilian restaurant Dopo, got his first taste of pizza al taglio nearly a decade ago in Rome. It was at Pizzarium, a famous pizza al taglio shop just steps away from the Vatican.

“It kinda changed my life. I had pizza that just was mind-blowing,” Smulewitz recalled.

Smulewitz then began dabbling in making his own pizza al taglio, working with chefs from Italy and serving it on occasion at Dopo’s now-closed sister restaurant Adesso. So when the spot in Berkeley’s Fourth Street shopping district formerly occupied by Tacubaya became available, the Smulewitzes jumped on the opportunity to open a fast-casual pizzeria specializing in pizza al taglio. They named it Pollara, after Jon’s grandmother. The pizzeria opened two months ago, with chef Joey Rachel and sous chef Ryan Stagg at the helm.

“That same feeling that I had the first time I had [pizza al taglio] I want people to have here,” Smulewitz said.

The concept is unlike any other pizza shops I’ve come across in the Bay — and what sets Pollara apart is the unique dough. The high-hydration pizza dough is cold-fermented in the fridge for 72 hours. This allows large bubbles to form in the dough to create a honeycomb structure, yielding crust that’s thick yet surprisingly crisp, light, and airy. The pizza is baked in an electric pizza oven from Italy.

By contrast, Neapolitan pizza typically has less moisture, is fermented for 24 hours or less, and is baked in a wood-fired oven.

At the counter, customers choose from a rotating selection of pizzas in the glass display case — up to 18 varieties — and point to how big of a slice they’d like. The server will cut the pizza with large scissors, then weigh it and reheat it. Pay for the pizza, then take a number and a seat, and the wait for the slice to be brought to you.

“We are definitely driven by the traditions of Rome, within the boundaries of being in Northern California and the fantastic produce and seasons,” said Smulewitz.

Though it was the least appealing in the display case due to its lack of colorful toppings, my favorite pizza at Pollara was the cacio e pepe pizza. Cacio e pepe, which translates to cheese and pepper, is a classic pasta dish in Rome. Chef Rachel tried a version of the dish in Rome’s Jewish Quarter that incorporated ricotta, which was the inspiration for the pizza at Pollara. Housemade fresh ricotta took the place of tomato sauce, adding creaminess and light, fluffy texture, while a sprinkling of pecorino cheese on top provided salty tang.

One of the most classic Roman pizzas, according to Smulewitz, is potato and mozzarella. That pizza is on offer at Pollara, too: a sauceless pizza simply topped with mozzarella, potato chunks, and a drizzle of olive oil. The effect was similar to potatoes au gratin: carby, comforting, and creamy.

Other pizzas feature different types of salumi. The diavola pizza was built on a tomato sauce base, topped with mozzarella and basil. I appreciated the forward heat of the spicy diavola salame, which was the centerpiece of an otherwise standard combination of toppings.

I loved the base of the pancetta pizza, which added acidic white onions and tart, salty capers to offset the fattiness of the pancetta pizza. But I was caught off guard by the soft, slippery texture of the smoked pancetta, which I incorrectly assumed would crisp up during the reheating process. For those who like pizza topped with lardo, this might be up your alley.

Like most things on Fourth Street, though, this pizza doesn’t come cheap. At around 80 cents to a dollar per ounce, the slices that the servers indicated were “standard size” rang up at over $5 each. Prices aren’t out of line given the quality, but it took me a couple slices plus appetizers to feel satiated, and that added up.

Don’t miss the fritti, or fried appetizers. The suppli classico was a solid version of a classic Roman appetizer: tomato sauce and mozzarella-infused rice, formed into a ball and deep-fried. Pollara’s version used a pleasantly tangy tomato sauce, offset by the creaminess of the mozzarella. But even better was the suppli carbonara, which somehow managed to stuff spaghetti alla carbonara into a ball of fried, carby goodness flavored with rich egg yolk and housemade guanciale.

The rest of the menu is thoughtful, including the salads. The little gems were exceptionally crunchy, and the dressing, made with mortared anchovies, garlic, and lemon, was well-balanced and light. A more unique but equally well-done salad was a crunchy blend of cabbage, red onions, cucumbers, and romano beans, plus chickpeas to help bulk it up.

Local beers, plus a selection of all-Italian wines by the glass or the bottle, are also available.

And even if you’re too full for dessert, grab a tiramisu on your way out to save for later, which comes by default in a plastic to-go cup. It’s well-executed, true to tradition, quick and casual — much like everything else at Pollara Pizzeria.&#8;