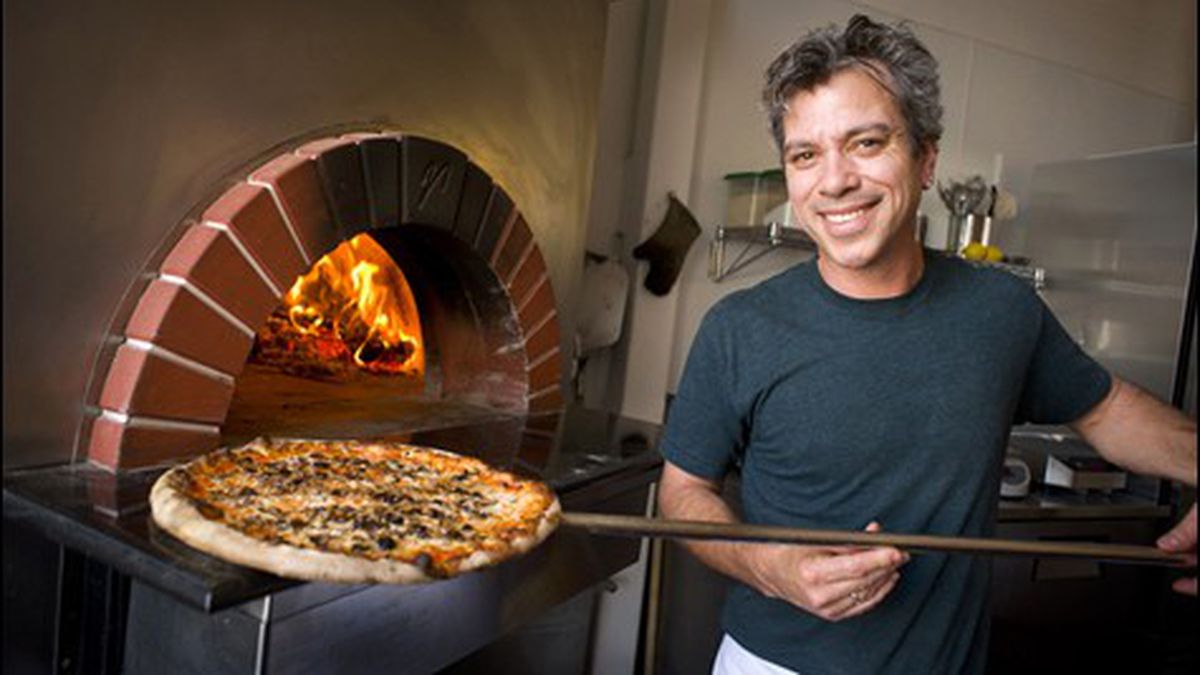 Singer-songwriter Paul Manousos turns his attention toward pizza. The results are impressive.

Until a few months ago, Paul Manousos was an amateur pizza savant. The 44-year-old singer-songwriter with three solo acoustic albums in his catalog never before worked as a pizzaiolo, never even cooked professionally. The first pizza Manousos made came out of an oven in the rented Italian villa where he was staying for a friend’s wedding a few years back. “I was just fascinated by the whole process,” he said.

In April, Manousos went public with his fascination, opening East End Pizza Co. in the Alameda Marketplace food hall. It’s the stall Feel Good Bakery used to occupy (they’ve moved to a larger space on the market’s west side), with a semi-industrial feel, old pianola rolls papering the walls, six counter seats looking onto Manousos’ wood-fired Mugnaini oven, and half again as many tables seeping into the wide corridor. The menu stops at seven pizzas, with maybe a special pie a few times a week. You can get selected pies in slice form. Beverages are limited to Boylan’s sodas and water.

The place has gotten just about zero press in the three months it’s been open, but it already feels naturalized in Alameda’s hey-man macrohood. At lunch, men in Coast Guard coveralls show up for slices; a mom yells over to the counter guy (rocking glasses rivaling those of rapper Redfoo) for help in sopping up a soda spill.

Walking up to East End’s counter on a recent Friday evening felt like stumbling onto an impromptu party just gearing up — Manousos and one of his workers were headed out to play a show after closing, inviting anyone in range to come check it out. A quick glance, and they could have been guys getting ready to break down the slicer to close up a hoagie shop, except if you looked again you saw Manousos’ seriousness tending his oven. The big dude at the counter that night waiting for takeout pies? It was Luka’s Taproom chef Jacob Alioto, who spotted me and told me how great Manousos’ pizzas are.

Alioto was right. East End is turning out some of the most meticulously crafted thin-crust pizzas I’ve tasted in the East Bay lately. The best pies on Manousos’ short summer menu have such a finely articulated point of view you wonder for a second if he’s being totally forthcoming about his lack of experience. Seriously? A guy who takes up pizza-making as a supplement to gigging at bars and house parties is suddenly turning out pies with this level of polish?

Maybe it’s because he doesn’t seem to have any particular pizza agenda that Manousos’ pies end up seeming effortless. He says his impulses are more New York than Neapolitan, crusts at the crisper end of the spectrum, but he fires them in a wood oven, California style, and with quintessential California fuel: almond logs. Leavened mostly naturally, with just a bump of added yeast, an East End crust has flavor and chew, an open crumb (though it’s stretched pretty thin), impressive rigidity, and a patina of brown that stops just shy of char. Manousos likes Will Gioia’s pizzas in Berkeley, but admits it’s been a while since he’s eaten one. Little Star, Arinell, Zero Zero — I get the feeling Manousos is struggling a bit to recall pizzas past just because I’ve pressed him. Really, East End’s best pizzas have a character all their own.

Take the Bouzouki, named for the lute-like string instrument of Greece, Manousos’ nod to his Greek roots. The flavors are both vibrant and delicate. A smear of tomato sauce and thin slices of crimini mushrooms lay down a dark ground, dappled with glints of Ligurian taggiasca olives that retain the flavor of gold-fruited oil. Manousos shows restraint with the feta — a spare scattering of small curds goes on after the pizza emerges from the oven, along with feathery tufts of lemon zest.

That lemon zest gives The Bouzouki its shimmer, a rippling effect like Johnny Marr’s arpeggiated guitar licks on a Smiths track. Opt for bits of unsmoked loukaniko sausage that Manousos makes himself from a mix of lamb and pork, and the whole thing picks up a nearly invisible richness without skewing heavy. Through sheer exuberance or plain old ingredient showboating, pizza in the California tradition can end up freighted with hunks of things like broccoli rabe, guanciale, fingerling potatoes (I’m looking straight down I-5 at you, Pizzeria Mozza), but Manousos has a light hand.

Even a pizza with a list of ingredients that should have made it a real ass kicker wore its power easily. The Diablita’s mix of Calabrian pepper-spiked tomato sauce, goat cheese, and raw garlic could have ended up dude-food extreme, but — even with optional slices of Hobbs pepperoni — the Diablita channeled fierceness into an interesting prickly warmth. Plus: Shaved from fat cloves, the garlic slices (sprinkled on after baking) showed like a scattering of pale rose petals against a plum-tomato field of red, amid white masses of goat cheese. It was unexpectedly pretty.

The Caruso offered up even more subtlety: a béchamel base, sweated leeks, and Sottocenere, a Venetian cow’s-milk cheese studded with truffles, rubbed with ash that’s been seasoned, you could say, with spices. It’s a perfect choice — the sweetness of milk intensified, the way a well-made béchamel does. It’s also an esoteric choice, and one that gives a clue to Manousos’ employment file — he spent a few years at Marketplace neighbor Farmstead Cheeses and Wines.

It’s funny, then, that the pizza I liked least here suffered under cheese with a texture less than optimal. For his margherita, Manousos buys fresh cows’-milk curd from Wisconsin, then hand-pulls it into mozzarella. I love the idea, but the pieces melted onto my margherita proved ever so slightly grainy. Maybe it was a fluke of that day’s pull, or maybe Manousos needs a few more weeks to get the technique down. After all, you can’t have an innate gift for everything. Can you?

Are More Cops the Answer?

Arrests Are Down, and Crime Is Up