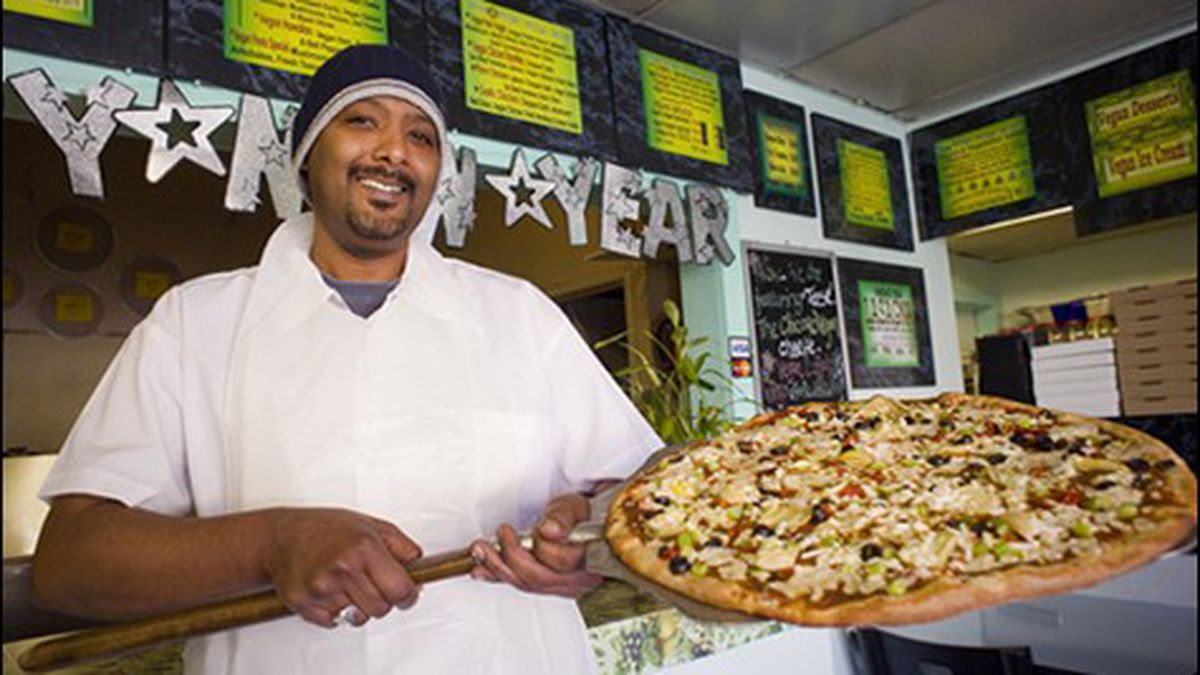 Sudan is an East African country bisected by the Nile and wracked by civil wars and ethnically motivated atrocities. Pizza is a cheese-topped flatbread first enjoyed in ancient Greece. What do you get when you combine the two? In northernmost Oakland, you get Pizza Plaza, whose Sudanese owner Amin Ahmed devised a vegan menu that makes this polka-dotted hole-in-the-wall a hotspot on the international vegan grapevine, drawing out-of-towners from far and wide.

But an additional vegan menu sporting sixteen specialty pizzas that also lets customers create their own custom pizzas and calzones by mixing and matching more than forty different possible toppings — including many different types of fake meat and vegan cheese and oddities such as kidney beans, ginger, sweet potatoes, and peas — is a rarity indeed, even in the vegan-friendly East Bay.

The fact that Ahmed uses only whole-wheat crust — he knows a lot about yeasted doughs “because in Sudan, people make their breads at home every day,” he said — is an extra plus.

He walks the walk. He’s been a vegetarian nearly all his life.

“I consider this a very personal issue, but I don’t like dealing with meat. Vegetarianism is not very common in Sudan, but meat prices are very high there, which is why there are lots of vegetarian options,” he said. A stint in India, where he earned a university degree in microbiology, expanded his familiarity with vegetarian cuisine. In 2000, Ahmed arrived in the Bay Area looking for work.

“Like most immigrants, I couldn’t find a job involving my degree,” he said. Starting as a pizza-delivery driver in San Mateo, he then began working in pizzeria kitchens. In 2006, he bought an extant pizzeria on the Oakland-Berkeley border, promptly excising all meat from its menu. A Pizza Hut stands one block away, almost as a taunt.

At first, Pizza Plaza was just vegetarian. Then Ahmed became fascinated with veganism, interviewing his vegan customers about which brands and products they liked best and why. As a result of that research, he uses soy-based versions of sausage, salami, and other flesh manufactured by Yves, a Canadian-founded forerunner in the fake-meat market. He also uses 100 percent dairy- and gluten-free Teese Vegan Cheese from the award-winning Chicago Soydairy.

On a vegan specialty pizza such as the “Meatza,” three different faux meats taste and feel almost real, and refreshingly less greasy than authentic meats. Mozzarella-style Teese looks and tastes convincing, for a vegan cheese, but isn’t nearly as rich and stretchy as the real deal. Chopped garlic brightens an otherwise simple marinara sauce. The full effect is hearty and satisfying, with the added spike of self-satisfaction that comes from eating ostensibly healthier versions of what otherwise would be guilty pleasures. (Speaking of which, Pizza Plaza also offers vegan cheesecake, vegan doughnuts, vegan ice cream, and a delectably rich, dark, thickly frosted vegan chocolate cake that could well hold its own against its buttery counterparts.)

Among the most popular toppings on the custom-pizza list are sweet potatoes and fresh ginger — “for health reasons,” Ahmed said. How does ginger fare on a pizza? We tried it so that you can decide whether or not to. Although dissonant at first, ginger’s bite quickly begins resonating, in waves, across the mouth in a way that is not biologically revolting. If we welcome this bite against bland rice or noodles in Asian cuisines and against wheat flour in gingerbread, why not welcome it against bland pizza crust? Other assertive “hot” flavors such as chili pepper feel perfectly natural on pizzas. Is the idea that ginger does not belong on pizza a mere cultural construct?

Sweet potato, too, is startlingly pizza-friendly: mild-on-mild, starch-on-starch, sweet yet not implacably so. If you like pineapple on pizza, try this.

Peas and kidney beans fail, however, feeling — slice after slice — like stowaways from curry, chili, and side dishes made with frozen carrot cubes. Their stark leguminess clashes catastrophically with tomato sauce, refusing to back down. Experiment all you like, but savor safe bets such as spinach, olives, and pine nuts.

With its bright lights, Shattuck Avenue-facing storefront, and jangly retro-rock radio, Pizza Plaza’s tiny space is not elegant. It’s not even homey, but almost. Fun touches such as pink-flowered serving plates and a wall-size vintage Thomas Brothers map of the greater East Bay, not to mention the eat-for-health ethos of the place, evince care. That the ringtone of the restaurant’s phone sounds like a parakeet and the plates bear the puzzling words Camllia Beauti in flowing script lend this place a funkiness that can’t be faked.

Although Pizza Plaza offers widespread free delivery from the Oakland waterfront to East Oakland to Albany, a potential downside is that this delivery can take a very long time, because Ahmed does it all himself. Struggling in a downed economy, he does everything at Pizza Plaza. So if he has to make several deliveries in one trip, the last one might arrive late. If customers are eating in the restaurant and a delivery call comes in, Ahmed must wait until they depart before he can make the delivery, locking the door but leaving the “OPEN” sign on.