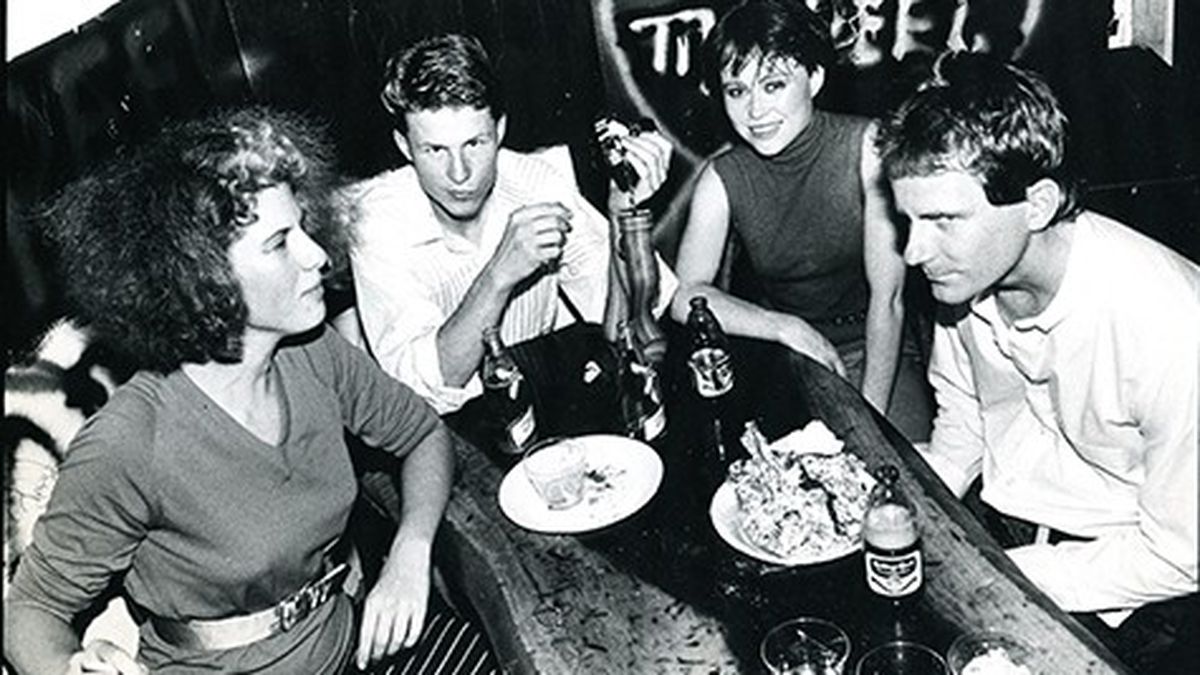 Beyond the Mabuhay Gardens, left-field punk flourished at Club Foot and the Deaf Club.

Ask Matt Heckert to set the scene for Pink Section’s 1978 formation in San Francisco and he’ll describe disaster. “Well, the Jonestown Massacre,” he said. “And then there was a fire in the Dante Hotel — coincidentally enough — and it burned our building down,” he said. “We rushed out in the middle of the night.”

And on November 27, 1978, Heckert picked up his bandmates near City Hall, where every cop appeared to be parked outside. As they were driving across the Bay Bridge to UC Berkeley’s Sproul Plaza for a free Talking Heads concert, the radio broadcast news of the murder of Harvey Milk and George Moscone by Dan White. “The Talking Heads played ‘Psycho Killer’ that night,” Hecker recalled. “It was unreal.”

In the more than three decades that have elapsed since Pink Section disbanded, Heckert hasn’t fretted much about the music’s legacy. Some members of prominent punk bands from the era still have skin in the game, appearing ceaselessly in documentaries to maintain authority and boost back catalog sales. But Heckert just moved along, effectively swapping punk to work with the robot performance troupe Survival Research Laboratories. Today, he maintains industrial chocolate-making equipment in Berkeley.

Still, without much involvement of Heckert or his old bandmates — Stephen Wymore, Carol Detweiler, and Judy Gittelsohn — a now-familiar process occurred. Gimme Something Better, an oral history of Bay Area punk, posited an authoritative account of the era, while maverick endeavors such as Joe Carducci’s Rock & the Pop Narcotic offered alternative narratives. Neither delved into Pink Section, but the internet’s democratized and accelerated punk history trawl ensured the band’s rediscovery.

And now the recordings of Pink Section and spinoff outfit Inflatable Boy Clams are newly available on Superior Viaduct. (Full disclosure: I am a former Superior Viaduct contractor.) Ironically, for a band named after the San Francisco Chronicle’s nightlife and entertainment guide, it took Pink Section decades to enter the annals of the arts.

Of course, the cult of punk appreciation sometimes suffers from its own version of a digital vigilantism misstep, wrongly crowning “lost classic” status upon drivel that’s better forgotten. Pink Section and Inflatable Boy Clams, however, deserve the belated coronation.

“Tour of China,” an ironic paean to Chairman Mao inspired by posters in Chinatown, is an arresting single. Clattering bells and cymbals busy the rhythm section’s disjunctive funk, which is further diced up by Heckert’s guitar riffs. The track pegs Pink Section as Devo fans, as does the single’s B-side, “Shopping,” with Heckert’s nasally whine whipped into hysterics by a consumerist nightmare. “Jane Blank,” a previously unreleased demo, features Gittelsohns’ spoken news report about an unapologetic insurrectionary, punctuated by jarring screeches.

Gittelsohn and Detweiler formed Inflatable Boy Clams with Genevieve Boutet De Monvel and Jojo Planteen after Pink Section. The act’s sole release, which originally appeared on Subterranean Records in 1981, is a monument to ineptitude. The opening song, “Skeletons,” a sparse, unnerving organ ditty with a skittish sax vamp and Planteen’s inscrutable chant about rattling bones, could only be improved if played in reverse, a claim proven by the second song, “Snoteleks.”

As Steve Tupper, longtime maestro at Subterranean, put it, “There was basically nothing else like them … and it was more of a performance art group.” Indeed, in the parlance of the scene’s old divisions, Inflatable Boy Clams’ EP is the work of an “art band.”

Aptly then, Pink Section formed through the San Francisco Art Institute. Heckert secured a three-bedroom apartment in North Beach for $250 a month, equidistant from school and the Mabuhay Gardens, nexus of the city’s initial punk scene. Quickly though, Heckert recalled schisms setting in.

“There were factions, like hardcore and art bands, and being called ‘new wave’ was derogatory,” he said. At a Mabuhay show with Z’ev, an artist whose confrontational solo performances found more affinity in industrial circles, Heckert remembered, “He was getting booed because he was banging on a car bumper and it was amazingly loud. I was like, ‘What, is it too abrasive to be punk?’ You could be outside the norm as long as you were still within something else.”

Pink Section played its first show in 1979 with Tuxedomoon and the Angels of Light-affiliated drum-and-vocals duo Noh Mercy at the Deaf Club, which was literally a social house for the hearing impaired. Deaf attendees would press their ears against furniture during shows while punks jumped up and down (the unique cultural exchange is documented in a short film from the era, Deaf Punk). The venue’s notoriety received a macabre boost when, in an apparent suicide, someone fell from the roof to their death — during a set by the band Red Asphalt, no less. Another peripheral venue was Club Foot, founded by the avant-garde composer and punk scene benefactor Richard Kelly, with whom Heckert performed in free-jazz-inflected ensembles such as Naked City (not to be confused with the outfit helmed by John Zorn.)

Pink Section adopted venues such as Club Foot and the Deaf Club as its natural environment. Each small, unassuming concert hall earned a devoted compilation album: Can You Hear Me? collects live recordings from the Deaf Club, while Club Foot features the left-field outfits orbiting Kelly. Heard together, the records begin to depict the array of experimentation happening at the time; Bay Area Retrograde and the newly available Pink Section and Inflatable Boy Clams material broaden our look back at the era’s stylistic panorama.

In terms of retrospective appreciation, maybe the Bay Area’s punk and post-punk era have taken longer to memorialize because of the very creative promiscuity and mutability that makes it so interesting. Instead of the usual misty-eyed reveries about a long-gone, seminal moment that musicians in his position are prone to dispensing, Heckert emphasized the fickle youth of his old peers. “It was a time of trying on new outfits,” he said. “None of us really knew who we were or what we were doing.”

Independent Voters, Prepare to Be Wooed