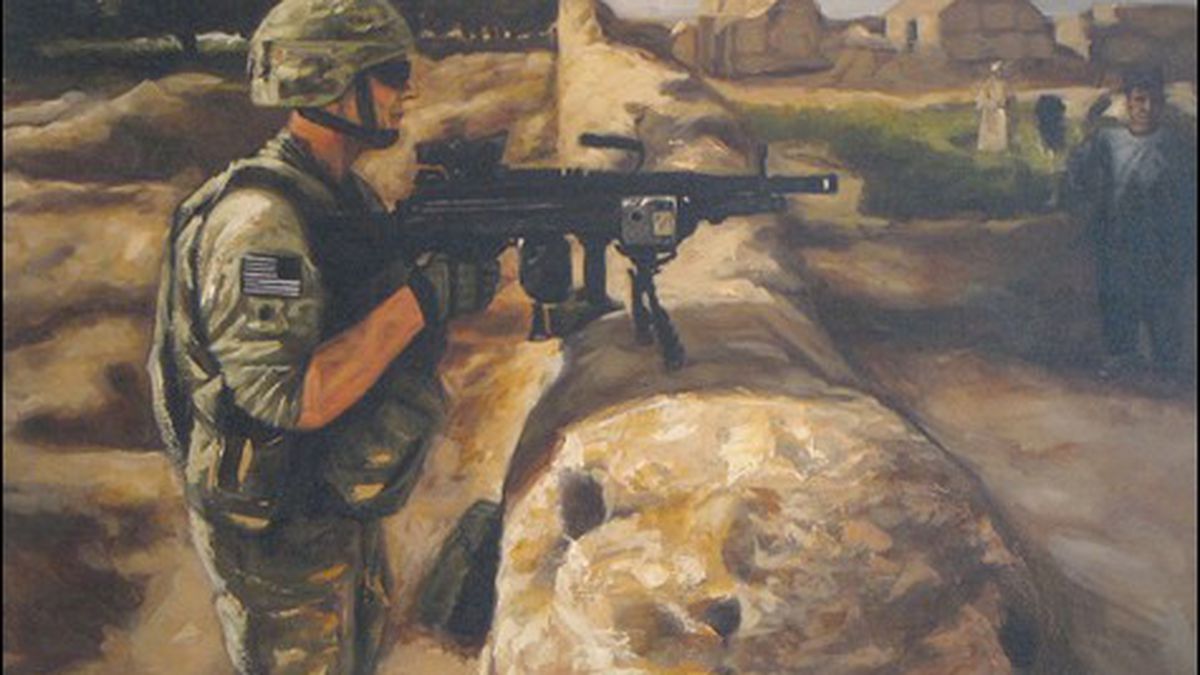 The wars in Afghanistan and Iraq have cost America dearly in both blood and treasure: nearly 1,700 lives in Afghanistan, nearly 4,500 in Iraq, and some $1.2 trillion, growing every second. (There’s other collateral damage, of course.) Whatever we think about war as an instrument of policy (each one sold as the final contest between good and evil), our energy-policy shortsightedness and resource-grabbing, and our very expensive weaponry complex, our soldiers were not the decision-makers. Navy veteran Aaron Hodge feels they deserve more recognition and respect in the current scapegoating political climate: “It is my duty to make these paintings. … I feel an obligation to my friends who are still serving. Painting is my active way of not letting their sacrifice be forgotten.”

In While We Sleep, Hodge depicts life at the front without hysterics or heroics. His bravura brushwork balances reportorial photorealism and expressionist drama, imbuing his snapshot source material with sober dignity. Contrasting with that gravitas are his friend’s resolutely antiheroic texts, none too forgiving of soldierly incompetence or cowardice, but revealing and powerful. In “Presence Patrol,” a soldier and a village elder sit on a hillside overlooking the village; it’s safer in the open for such patrols investigating “suspicious activity.” In “Fully Automatic,” a Squad Automatic Weapon gunner watches for hostile vehicles. “By far one of my favorite soldiers. … He (for the most part) was in high spirits all the time. … He knew every movie quote … and always made us laugh. Really cool dude.” In “Probing Outside Ghundi Gar,” a sergeant looks for buried IEDs. “Always the go-to guy when I needed someone to probe for mines. … He just didn’t give a fuck and always went first. … He is in a band with three other of my soldiers and plays guitar … pretty good if I might say … scream-o hardcore music.” In “Feeling,” a soldier patrols the Entry Control Point. “He was laid-back and actually cared about the Afghan people. Sometimes we gotta be assholes on patrol and he always disagreed. He has ‘feelings’ and, honestly, that bothered us, ’cause it could mean the difference between life and death in combat.” While We Sleep runs through August 27 at Hatch Gallery (492 23rd St., Oakland). 510-879-7382 or HatchGallery.org

Phil Tagami is Not Backing Down

On and Off the Hook

The Dark Side of Amazon