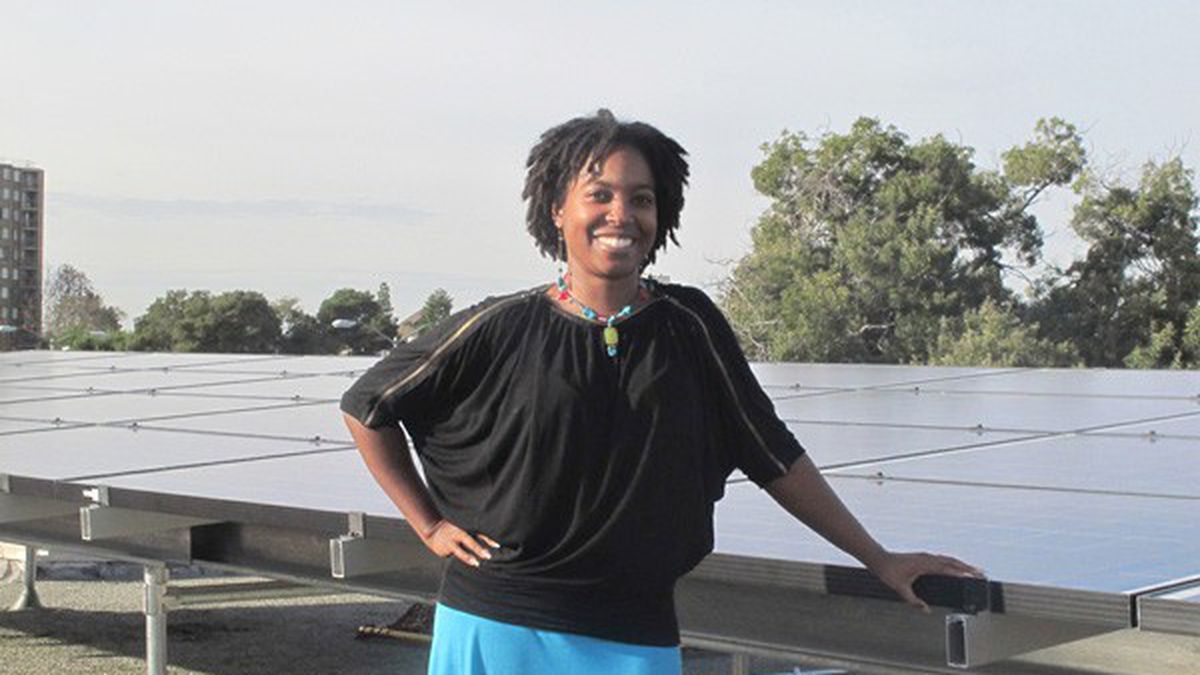 Plus Kitchen on Fire succeeds on a wacky business model.

While People’s Grocery in West Oakland fights to attain economic sustainability, the food justice nonprofit made a different type of sustainable leap last week: Solar panels were installed on the roof to provide 100 percent of its electricity.

The panels were provided at no cost to People’s Grocery by Berkeley-based crowd-sourcing platform Solar Mosaic. Seventy disparate funders coughed up almost $40,000 for the project, including one top-secret “celebrity investor” (Michael Pollan? Kim Kardashian?). The energy savings accrued by People’s Grocery’s landlords will be returned to investors over the lifetime of the lease.

“This is great stuff,” said People’s Grocery Executive Director Nikki Henderson. “It’s all about creating sustainable communities, and showing how food is tied in with water, transportation, and energy.”

Even if you’re weary of feature stories that gush about the crowd-sourced funding model, it continues to be an effective way for dreamers to finance lofty projects. People’s Grocery was one of a handful of Oakland nonprofits chosen to receive the Solar Mosaic treatment, including the Asian Resource Center in Chinatown and St. Vincent de Paul (which is still in the midst of raising funds).

People’s Grocery has long tried to launch an affiliated grocery store called People’s Community Market, a for-profit method to achieve long-term economic sustainability. Henderson said they’re far from receiving adequate investments to launch the store (they need roughly $3 million total), but the success of the Solar Mosaic project gives her hope. “Socially conscious investors are out there, I have no doubt,” she said. “None.”

The People’s Grocery solar panels arrive on the heels of another Oakland project — the Noble Cafe — at the intersection of food and sustainable energy. Opened on January 9, the cafe (100 Grand Ave., Ste. 111) is being lauded as the first carbon-neutral coffee shop in the country. It uses energy-efficient equipment, on-site composting, and carbon offset payouts to strive for a lofty zero-carbon goal. The City of Oakland shelled out $55,000 to help owner Dimitri Thompson start the cafe.

Every few months I stumble on a photo of the wacky owners of the Kitchen on Fire cooking school in Berkeley, mugging with ludicrously oversized knives or sticking weird objects in their mouths. Positioning themselves as bad-boy outsiders of the culinary community, they’re about as edgy as a mash-up of Guy Fieri and Penn and Teller. The taglines write themselves: They’re crazy….about cooking!

But classically trained chefs MikeC (his legal name) and Olivier Said (former co-owner of César Berkeley) have shown a surprising amount of endurance and growth in their six years running Kitchen on Fire. This month they launched a second Berkeley location that’s twice as big as the first. And whether or not you dig their goofy antics, these dudes have clearly tapped into a sharp business model.

“We do comedy skits and use bullwhips to explain how proteins are denatured, but that’s just so you don’t fall asleep,” says MikeC, sounding like a kid who thinks school is a major drag. “Professors can be so boring; we’d hate for you to run out of the class screaming.”

Classes range from making perfect batters to sushi and nigiri prep. They aren’t cheap — $70 for a one-off or $800 for twelve-week sessions — but they sell out regularly. The new location, a few blocks from Berkeley Bowl West, will enable Kitchen on Fire to add many new classes and private corporate team-building sessions. Said also reports that they are hiring more cooking instructors; no professional background necessary.

Oh, and about that tagline: MikeC says they’re “Seriously funny, but also serious about food.” Ooph.

In this week’s review, I heap praise on Red Buffalo, a mysterious wings joint in a desolate corner of West Oakland. I wasn’t able to track down any information about the owners or how long it’s been in business.

When you call, you typically reach a voicemail that instructs you not to leave any messages, as they are never checked. In person, when I awkwardly explained myself through the thick glass, the cashier told me she “knows nothing” and to call back and ask for Hong.

Hong only revealed the owner’s first name, Dana, and that every sauce is made from scratch. And when our photographer tried to set up a photo shoot, Hong suggested he “take a picture of the website.”

If anyone knows any back story about this wing cipher, drop me a line!