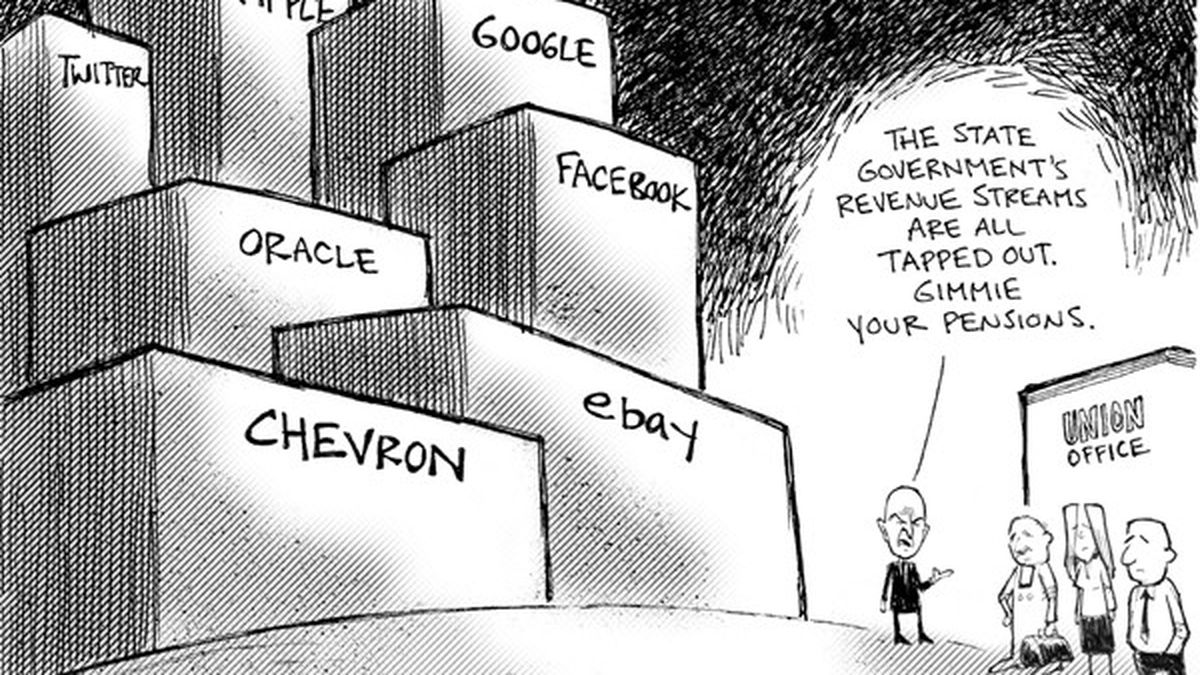 Pensions Aren’t the Only Problem

Corporate handouts and tax breaks represent a significant amount of government waste. Plus Bonta and Guillen head for runoff.

The current frustration over public-employee pensions is understandable. During the past several decades, private companies have stopped providing pensions for their workers, replacing them with 401k-style retirement plans, or nothing at all. And so it’s no surprise that private-sector employees, who represent the majority of the electorate, are now unhappy that their public-employee brethren receive guaranteed pensions when they do not.

Voter resentment over public-employee retirement plans also appears to be growing. Last week, voters in two of California’s largest cities, San Jose and San Diego, voted overwhelmingly to slash public-sector pensions. In San Jose, where the anti-pension ballot measure received 70 percent of the vote, public employees will be forced to either pay a greater share of their retirement costs or select a pared-down retirement package. Some 67 percent of San Diego voters, meanwhile, approved a measure that freezes public-employee pension payouts and puts new public workers into a 401k plan.

Voters also appear to be increasingly blaming public-employee pay, benefits, and pensions for the severe cuts in government services during the past several years — from the closing of state parks to the skyrocketing costs of higher education. Voter anger also has been fueled by the mainstream press, which has focused heavily on public-employee compensation during the past decade, portraying it as government waste.

Page One reports on over-the-top compensation packages for public-sector officials have become commonplace. And while most of these stories are important ones to tell, and represent good watchdog journalism, they only represent part of the government-waste picture. What’s often underreported, or ignored completely, are stories about giveaways, loopholes, and tax policies that favor large corporations that don’t need government handouts but receive them anyway.

And yet in California, these corporate giveaways play an important role in why our state and local governments are broke. The handouts include unnecessarily low corporate property taxes, tax exemptions for oil and natural gas extraction, and a corporate tax rate that forces small companies to pay the same rates as Google and Apple.

Anti-tax forces often claim that California’s 8.84-percent corporate-tax rate is one of the highest in the nation. But they usually ignore the corporate giveaways. Indeed, a 2010 report by an anti-tax group acknowledged that the state’s true business tax rate is 4.7 percent, when accounting for many of the giveaways, placing California in the middle of the pack nationwide and lower than states such as Florida and Texas.

A series of measures earlier this year would have eliminated some of these corporate handouts, and saved the state about $6 billion annually. Yet these measures, and these issues, have received scant attention in the mainstream press, and have been overwhelmed by the intense scrutiny on public-employee compensation.

So much so that some unions have given up trying to overcome all of the negative press and convince voters of their cause. The San Jose police union, for example, chose not to mount an expensive political campaign against the pension measure, and instead saved its money for a court fight. The union sued to overturn the measure last week, contending that it’s illegal.

Nonetheless, state public-employee unions would be smart to work with Governor Jerry Brown on his pension-reform proposals. Although it would mean some concessions and cutbacks to retirement benefits, Brown’s plan is more reasonable than the measures that just passed in San Jose and San Diego. Moreover, pension reform not only would ease public resentment, it would likely increase the chances for Brown’s Millionaires Tax, which now has only 52 percent approval, according to the latest Field Poll.

However, in exchange for pension concessions, public-employee unions should also push the governor to finally address the billions of dollars that California government wastes each year on corporate giveaways and tax loopholes. After all, public-employee pensions aren’t the only reason for why we’re in this mess.

Who says the Express isn’t influential? Last week, AC Transit board member Joel Young was eliminated from the 18th Assembly District race after an environmental group and a liberal lawyers’ organization used reports from the Express about Young’s questionable behavior to stop him from making the November runoff. The series of glossy mailers financed by the California League of Conservation Voters and Consumer Attorneys of California repeatedly quoted Express reports about Young, including an endorsement that stated he was “unfit for public office.”

After the barrage of mailers, Alameda Vice Mayor Rob Bonta and Peralta Community Colleges Trustee Abel Guillen finished first and second in last week’s primary, receiving 36.98 percent and 29.42 percent of the vote, respectively, and are now headed for the runoff. Young came in third with 18.5 percent.

In the race for superior court judge, attorney Tara Flanagan came in first with 50.56 percent of the vote, followed by Andrew Wiener, former chair of the Oakland Public Ethics Commission, who received 30.06 percent. If Flanagan can stay above 50 percent during the counting of late-absentee and provisional ballots, she will be declared the winner.

In the 20th Assembly District race, Hayward City Councilman Bill Quirk and political newcomer Jennifer Ong are headed for the November runoff. Among the local measures, Measure B, the Peralta colleges parcel tax, cruised to victory, garnering 72.44 percent of the vote. It needed two-thirds, or 66.7 percent, to win. But Measure C, the Alameda city sales tax hike, lost when it failed to reach the two-thirds requirement. It received just 50.49 percent of the vote.