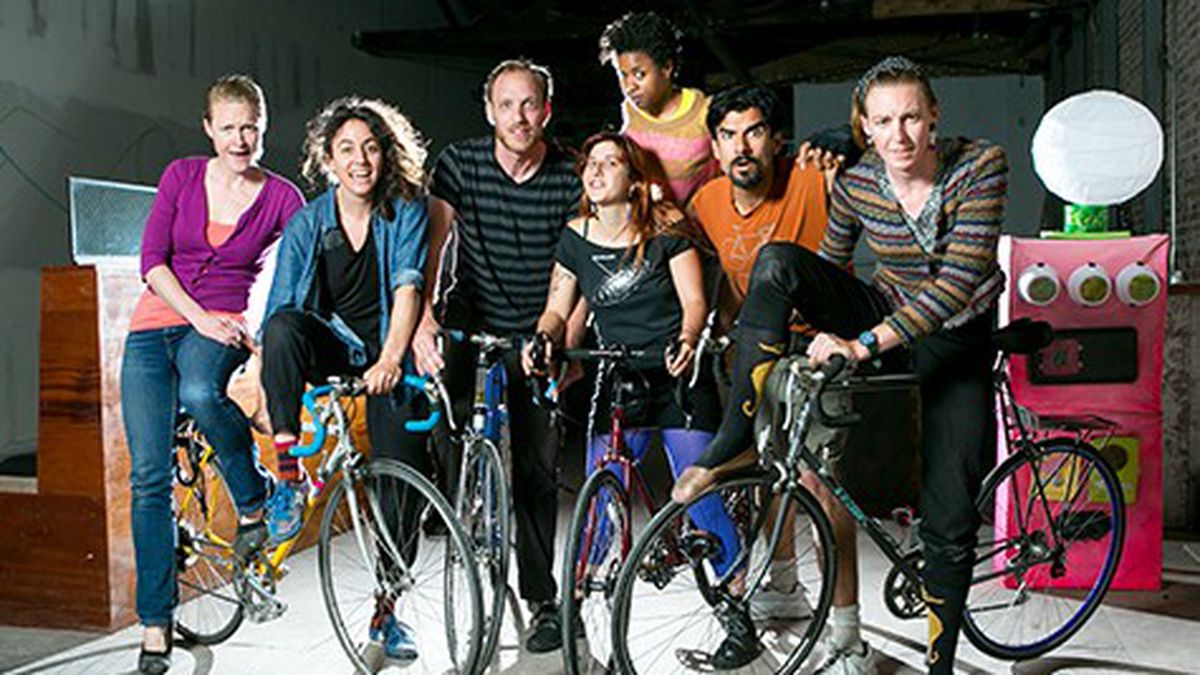 The Agile Rascals, an Oakland-based theater troupe, is biking a play from San Francisco to New York City, performing their Beckett-esque production at stops along the way.

In December 2013, Dara Silverman had an idea for a grand adventure. The Bay Area-based playwright had recently begun extending the length of her bike rides, dreaming of a long-distance tour across the country. She’d also been imagining a large-scale collaborative art project. As if each wouldn’t be challenging enough on its own, she decided to combine the two. She would write a play and gather a gaggle of actors to bike it from San Francisco to New York City, performing at stops along the way. A year and a half later, Silverman and the since-established Agile Rascal Traveling Bike Theatre troupe are ready to embark.

Silverman began by plastering San Francisco and Oakland with fliers announcing the project. Meanwhile, Allison Fenner hadn’t seen the posters, but people kept asking her if she had put them up. A “playmaker,” actor, and avid cyclist, she was perfect for the project. She became an early joiner, and over the next year, the production picked up five others in similarly serendipitous ways.

They began meeting once a week, for five hours at a time, in the basement of the Temescal Public Library to workshop script ideas. It quickly became clear, Fenner said, that the play would inhabit “the intersection of spirituality, technology, and capitalism in our shifting landscapes,” because that’s what felt relevant. They ultimately produced Sunlight on the Brink, a dystopian comedy set at a gas station.

In the futuristic premise, California has grown uninhabitable — the price of water is outrageous — so everyone is forced to migrate east. A gas station pops up to serve the needs of the mass exodus, but eventually runs out of gas. The only people left are the station attendant and a forgotten child, until a group of stragglers gradually congregates. In the style of Beckett’s Waiting for Godot, the situation is dire, but simultaneously so absurd that hopeless humor pervades, as the cast is left waiting for salvation that may never come. “I think there is something we can all relate to about that,” said Silverman.

The show will premier in San Francisco on May 15, with a performance the following night in Oakland, but it won’t be fully finished until it reaches New York. It’s no coincidence that the Rascals are migrating east with a play about migrating east. Silverman and her collaborators intentionally wanted the play to touch on themes that they would personally be exploring on their journey. “Things about self-reliance, relying on other people, the landscape of the United States, global warming, food — all these questions,” said Silverman. That way, the play will continually evolve as the actors begin to answer those questions through first-hand experience.

The Agaile Rascals plan to stop in sixteen cities and towns, averaging 300–400 miles of biking a week. Along the way, they’ll camp in backyards or crash on with new friends. They’ll also perform in a variety of venues, from bars to bike shops to the Santa Monica Pier. They’ll use super bright bike lights to light the show, and they’ll carry the set with them — an ingeniously designed, lightweight, collapsible set that Fenner styled in a retro-futurist pop-art aesthetic.

For the cast, though, the setting of the play will be the entire country. Or, as participating actor Jenny Hipscher poetically put it, the act of moving across the country. “Displacing yourself and being displaced. … What happens in that space?” said Hipscher. “That’s what the setting is of it — the in-betweens.”

The More Tax Plans, the Better