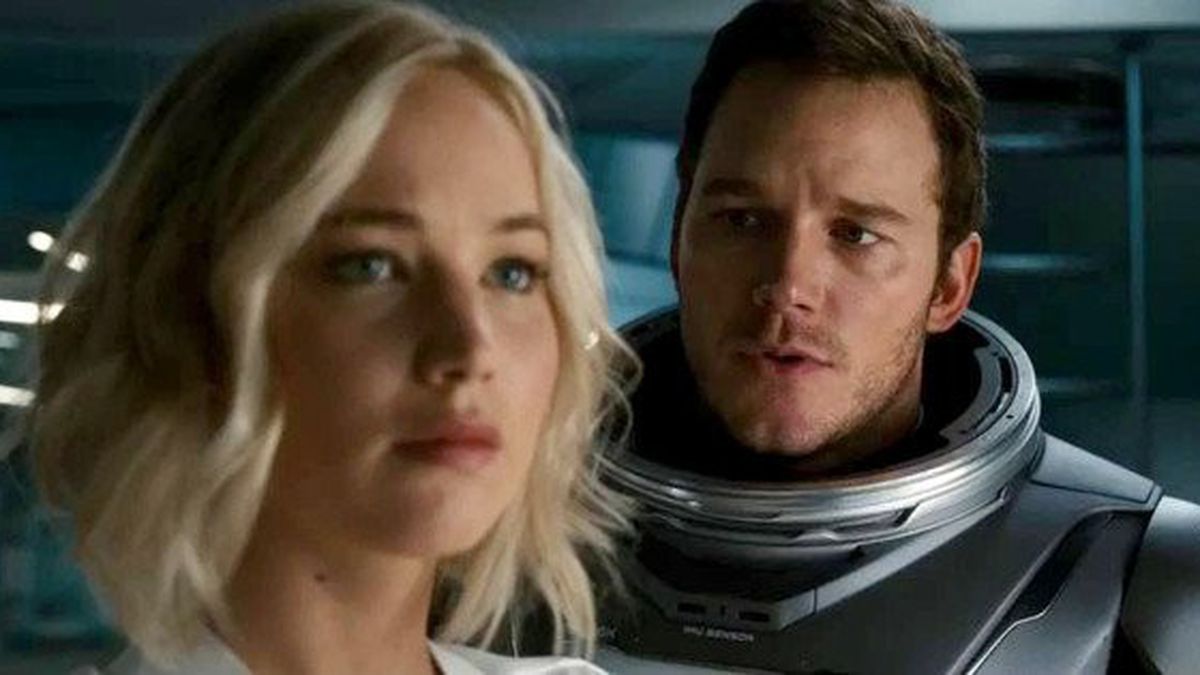 Jennifer Lawrence is in outer space — but she isn’t very happy about it. As the fitful space drama Passengers develops, her character, Aurora, is awakened from her planned hibernation aboard the starship Avalon by a fellow passenger, Jim (Chris Pratt). The Avalon is bound for the Homestead II Colony somewhere in deep space, with more than 5,000 slumbering earthlings aboard. The outward-bound voyage takes 120 years, during which everything is run by on-board computers and even the crew is hibernating.
Around the thirtieth year out, the ship passes through some sort of intergalactic disturbance and Jim accidentally wakes up ninety years too soon. Unable to rouse help, Jim soon resigns himself to living out his life and dying before the ship reaches its destination and everyone else awakens. Plenty of food is available, but Jim is naturally lonesome. So he picks out the most attractive female he can find, Aurora, disconnects her from her sleep pod, and deliberately wakes her up — essentially to share his fate and keep him company. Once Aurora learns why she has been capriciously chosen to live the rest of her life with this stranger on a space ship, she is not pleased.
It never fails to amuse us, the lengths screenwriters will go to set up a romantic situation. In this case, writer Jon Spaihts (Doctor Strange) and director Morten Tyldum (The Imitation Game) are re-thinking the old “trapped in an elevator” or “trapped in the subway during a blackout” gag, except that this elevator is in outer space. No doubt to show off the special effects. Jim gets his wish — what guy wouldn’t want to be alone with Lawrence on a space ship, with astounding views of exploding asteroids and a cool infinity pool? But instead of being happy to spend her life with an equipment repairman who was en route to a new job on another planet, news reporter Aurora — who’s traveling Gold Class as compared to Jim’s steerage — quite justifiably feels like a sex object. Not exactly the basis for an enthralling love story.
Aurora and Jim eventually run out of preliminary pursuits and have sex, offscreen. That doesn’t really solve anything, naturally. We’re reminded of the old Lina Wertmüller movie Swept Away, in which a spoiled rich woman is stranded on an island with a working-class sailor after their cruise ship sinks. That arrangement didn’t work out too well, either.
Lawrence is not exactly a warm, inviting screen personality. In her most effective roles — probably Winter’s Bone or Silver Linings Playbook or American Hustle — she projects more than a touch of menace to go along with her stunning pulchritude. In Passengers, Aurora never quite falls in love with Jim. She maintains a pissed-off attitude for most of the running time, and we grow just as tired of her as Aurora does in relation to Jim. Any actor in the world can look stupid if he or she follows a stupid script.
I’ve got an idea about how to save Passengers: Theater audiences could have the option of being cryogenically frozen before the movie starts, then awakened after it’s over. The theater could beam a better movie into each customer’s brain as he or she sleeps, and they’d wake up with at least the “memory” (à la Total Recall) of having seen a satisfying romantic drama about two people making the best of a rotten situation and falling in love. But that would probably not work as intended and could lead to lawsuits. Better to just skip the whole thing.
Facebook
Twitter
Linkedin