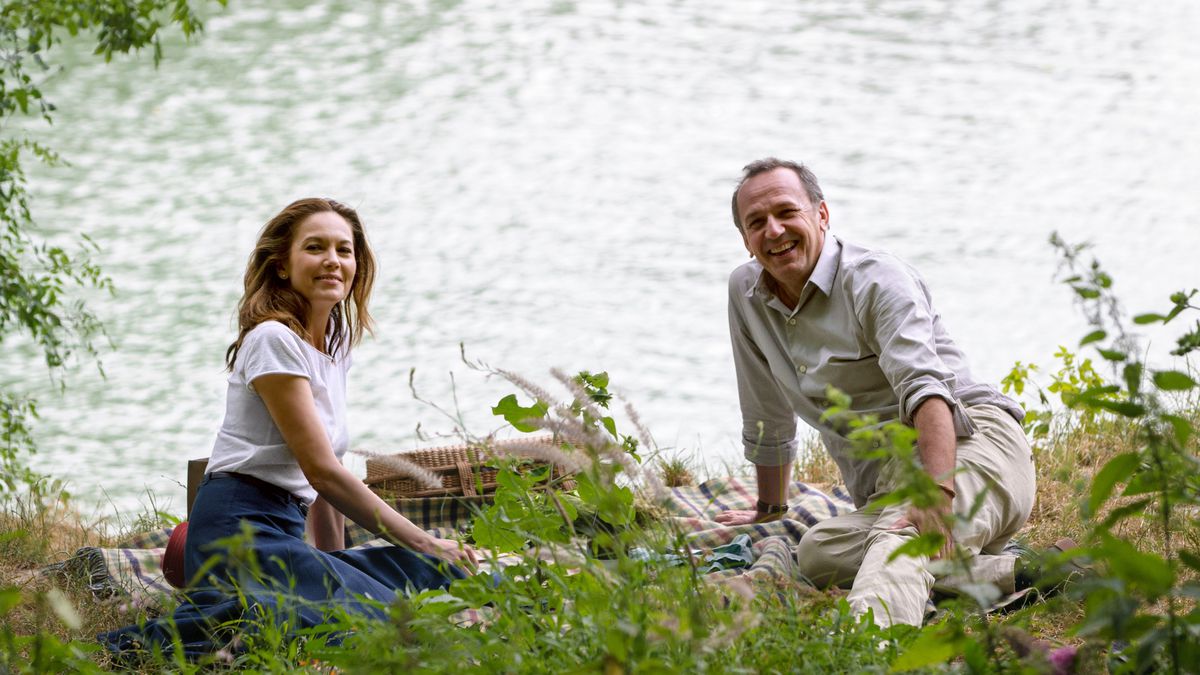 Paris Can Wait, Let Me Finish This Truffle.

by Kelly Vance
May 17, 2017
Diane Lane and Arnaud Viard picnic on the grass in Paris Can Wait.

Eleanor Coppola should realistically have very little left to prove. She directed Hearts of Darkness: A Filmmaker’s Apocalypse (1991), one of the finest making-of documentaries of all time. She’s also the matriarch of the cinematic dynasty started by her husband, Francis Ford Coppola, and encompassing her filmmaking daughter, Sofia Coppola. On the basis of that, Eleanor Coppola might be excused if she decided to relax a bit and assume the role of Grande Dame of Geyserville.

But she obviously has more urgent things on her mind, such as Paris Can Wait, her effervescent new romantic comedy. In it, a fashionable American woman named Anne (Diane Lane) is finishing up a visit to the Festival de Cannes with her husband Michael (Alec Baldwin), a hyper-busy movie producer making the European rounds, arranging deals for his next film. Anne is bored. Her hubby is a tightwad who treats her like a servant. And so when the time comes to fly off with him, Anne fakes an earache and accepts the offer of Michael’s associate Jacques (Arnaud Viard) to drive to Paris with him instead.

Let’s face it, that plot outline has all the earmarks of a standard middle-age-crazy light drama — the type of harmless exercise that usually accomplishes nothing more than providing employment to actors of a certain age while furnishing mild entertainment for gray-haired matinee audiences in art houses. But producer-writer-director Coppola works at a different level than that.

Her script is intelligently mature rather than maudlin, the mood is one of unforced joie-de-vivre, and her glib cast performs like thoroughbreds. Consequently, Anne and Jacques’ road trip to Paris combines the expected travelogue scenery with a disarmingly naturalistic story. The one-day autoroute trip stretches into a week of back roads and “hidden gem” restaurants, and the taken-for-granted wife relearns how to have fun, as if wining and dining your way through the heart of France with a loquacious free spirit were a do-it-yourself “life coach” session.

Lane is well suited to the role of a woman swept up in her husband’s career and curious about life outside the gilded cage. A veteran of four films (including The Cotton Club) for Francis Ford Coppola in addition to a separate career in live theater, she has specialized in decorous but less-than-flamboyant character parts in such middle-of-the-road movies as Chaplin, A Perfect Storm, and Hollywoodland, plus TV. With the frustrated Anne, Lane has a chance to sketch in a type familiar to showbiz people – the calm, creative woman hitched to the blustery, driven, alpha male, who suffers with her eyes and silently awaits her turn. It’s a wonderful role, and Lane plays it as if she’s lived it. Eleanor Coppola evidently has.

French actor-writer-director Viard is so convincing a tour guide, he could start his own business escorting upscale hedonists between gastronomic hot spots, in search of the perfect meal. Jacques’ nickname for Anne is Brûlée, presumably because she’s burning to experience life on her own terms for a change. As for Michael the odd man out, Baldwin can play a hard-charging businessman in his sleep. Ideal casting, onscreen for less than ten minutes but throws his shadow the length of the film.

It’s certainly possible to enjoy Paris Can Wait as an amiable gazetteer for the unhurried pleasures of France. But it’s even more satisfying as a happy, well knit character study that’s openly sympathetic to people who stay in five-star hotels but would rather steal kisses in an old Peugeot.