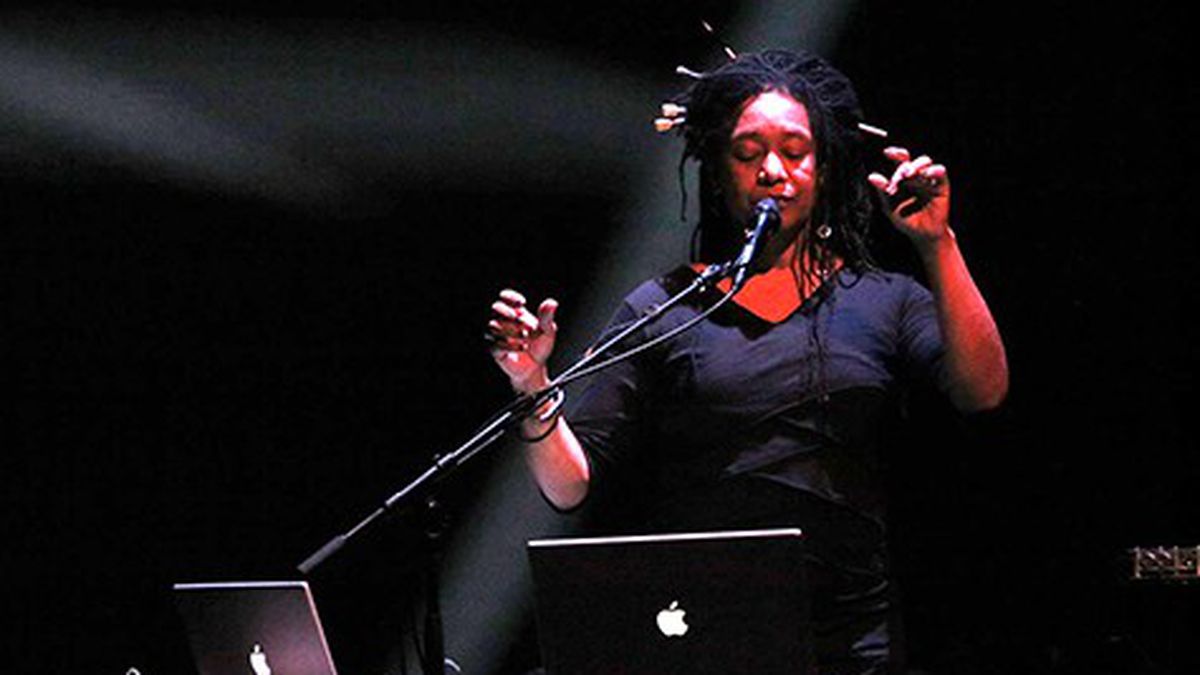 Pamela Z: The Musicality of Diction

Singer and composer Pamela Z resembles a magician when she performs. Often dressed in all black and standing before her laptop, the sixty-year-old artist uses sweeping gestures to activate different effects without touching a single button or knob. She loops her operatic singing in real time, weaving an abstract collage of voices that include live monologue and pre-recorded samples of other people’s speech.

The secret behind this auditory alchemy is a custom-designed MIDI (Musical Instrument Digital Interface) controller that uses ultrasound to trigger an array of samples and effects on her laptop. The innovative instrument, which she designed with the help of fellow composer Donald Swearingen, enables her to use the position of her hands in relation to sensors to manipulate sound. In previous works, Z has used this technique to process her voice while singing on stage, altering its volume or adding delays and layers of harmonies with a flick of the wrist.

In Memory Trace (which she will perform in full at Yerba Buena Center for the Arts in San Francisco on April 28), Z investigates the musical qualities of human speech. Using samples culled from interviews that she recorded with various subjects about time, memory, dreams, and perception, she takes snippets of words and phrases and processes them until they become unrecognizable and abstract, allowing discernible quotations to surface only occasionally.

“What I like about language is its sound, and I listen to it purely for its sound,” she said when we met at the studio where she lives and works in San Francisco’s Mission district. “But I have the awareness that if the language being spoken is understandable to the listeners, you can’t divorce the meaning from [the sound], so that adds another layer.”

Dressed in a long-sleeved black T-shirt; black, high-water cargo pants; Chelsea boots with angular, geometric platforms; and a pair of electric blue, thick-framed glasses, she bustled about the studio, whose clutter evinced nearly thirty years of creative practice. Electronic instruments were scattered about her work space; MIDI controllers spilled out of a suitcase, ready for her upcoming national tour; underneath her cramped loft, a doorway led to an isolation chamber where she records many of her interviews and other samples.

A classically trained vocalist with a music degree from the University of Colorado, Z became interested in making experimental music shortly after graduating in 1978. At that time, she earned her living busking and performing in clubs as a folk-rock singer-songwriter. She also hosted Tuesday Afternoon Sound Alternative, a public access radio show on KGNU in Boulder. On air, she played a wide range of music with experimental and countercultural leanings — from contemporary classical music to punk. As her interest in avant-garde sounds grew, she realized that folk-rock no longer reflected her own tastes.

Z moved to San Francisco in the Eighties and has since found considerable success in its experimental music scene. She’s performed at such prestigious institutions as the YBCA and the Berkeley Art Museum and Pacific Film Archive, where she will play her next concert, the aptly titled Full: Voice, on March 23.

Z’s voice is the most commanding element in her work — even in pieces where string and brass instruments accompany her singing. She can dip into low, throaty, soulful timbres and blast off into high notes with intense vibrato. And through looping and processing particular phrases, she creates awe-inspiring, tapestry-like arrangements that sound as if they’re coming from a choir rather than a soloist.

Many of Z’s works also contain video components. As she sings, she uses the ultrasound-based MIDI controller to activate images on large screens behind her. In Memory Trace, videos of her interview subjects drift in and out of focus. She juxtaposes them with footage that nods to the passage of time: the hands of an antique clock, rain falling, a livestream of her hands moving as she performs.

As we got acquainted, I mentioned that my family moved to the Bay Area from Russia when I was a kid. “I can hear the slightest trace of your accent,” she observed — usually something that goes undetected in my day-to-day interactions. Working with interview subjects has given Z a linguist’s ear. For a piece she did with the Kronos Quartet, she interviewed a variety of subjects with different regional accents, ethnic backgrounds, and English language proficiencies. Having studied French, Italian, and Japanese herself, she is attuned to the subtle qualities of diction and bases her compositions on sounds that wouldn’t normally be considered music to the untrained listener.

“I really like finding the melodic material in spoken text and composing music made entirely out of speech,” she said.

Projects such as Memory Trace have also cast Z in the role of a sociologist. One of the most interesting things her interviews have illuminated, she continued, are the subtle similarities between people from different walks of life.

“When you interview a bunch of people and ask all of them the same questions, you ultimately find that on one or two of the questions, they all say the same things,” she observed. “And then it’s beautiful, because you have this whole chorus of people who were never in the room together all in unison saying something. It all becomes this really interesting musical thing, and I love playing with that.”