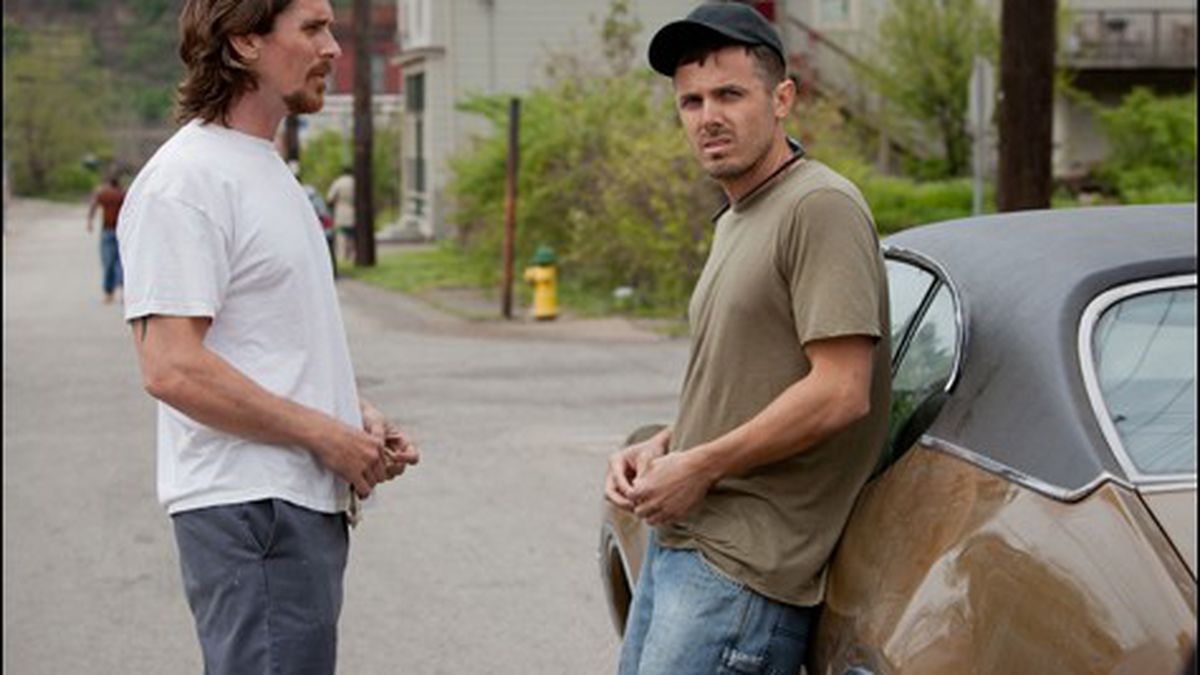 Out of the Furnace

More corrosion in the Rust Belt.

Interesting cast, but Scott Cooper’s Out of the Furnace has a few problems. Let’s start with the writing. If we take out every “fuck” and all the references to contemporary recreational drugs, the dialogue is remarkably similar to that of any 1930s gangster movie — in fact, the lines (by director Cooper and writer Brad Ingelsby) were probably clichéd back then.

Another big writing glitch: The action opens with a niftily done scene at a drive-in movie where Harlan DeGroat (Woody Harrelson) and a female friend are parked in a car, watching the show. An untoward incident occurs, unpleasantries are exchanged between Harlan and the guy in the next car, and Harlan proceeds to stomp the buttered popcorn out of both his own girlfriend and the complainer. It is thus established that not only is Harlan a mean-looking piece of work, but that he’s a vicious bully who enjoys tormenting everyone in his path.

Then the main titles come onscreen. Cut to Russell Baze (Christian Bale) coming out of his shift at the steel mill in North Braddock, Pennsylvania. Like Harlan, the bearded, beady-eyed Russell has a lean and hungry look, but without the sadistic sneer. Russell is the picture of the long-suffering American factory worker, a rare breed. So immediately we’re shown that Russell is the good guy to Harlan’s bad guy. We also surmise they’re going to settle their differences in the last reel and that Russell is most likely going to win. Because in any movie, Christian Bale will always beat Woody Harrelson. All this before the story itself really gets moving. (We can only guess why the filmmakers named Russell after the famous jockey Russell Baze — they could just as easily have named him Willie Shoemaker or Eddie Delahoussaye.)

Ex-con Russell has troubles of the drunk-driving-fatal-car-crash-prison-time variety, but those are nothing compared to those of his hard-luck brother Rodney (Casey Affleck), a Gulf War vet who resorts to bare-knuckle prize fights to earn a living because he refuses to go down to the mill. The fights are run by a hood named John Petty (Willem Dafoe) and often involve combatants sponsored by Harlan and his gang of drug-dealing hillbillies from the Ramapo Mountains way over in New Jersey. Rodney, Russell, and Harlan are on a collision course, but first Russell must take care of the matter of his ex, Lena (Zoë Saldana), who took up with the police chief (Forest Whitaker) while Russell was serving time. What we’ve got here is a true Recession Special. Everyone is broke and desperate, and every surface seems to be coated in grime. Out of the Furnace is a one-note sonata of grief.

Harrelson is a nasty delight as Harlan, one of the finest heavies in the actor’s portfolio of creeps. Affleck’s durable-but-dumb Rodney also fills the bill in his accustomed haywire style. Bale’s Russell is a bit more puzzling, mostly because the filmmakers set him on tracks like a camera, with no unexpected deviations allowed. Bale is capable of much better work than this. We can see each and every plot turn at least thirty minutes ahead. One other writing problem for Cooper (who struck gold last time out with Jeff Bridges in Crazy Heart): He doesn’t know when to end a scene. The dragged-out finale, a would-be Rust Belt revenge capper, seems to go on forever. At least they didn’t segue Russell’s deer-hunting scene with his Uncle Red (Sam Shepard) into a Russian roulette ordeal in a hut with some Viet Cong. As we mentioned, there are writing problems. Other than that, Out of the Furnace isn’t half bad.