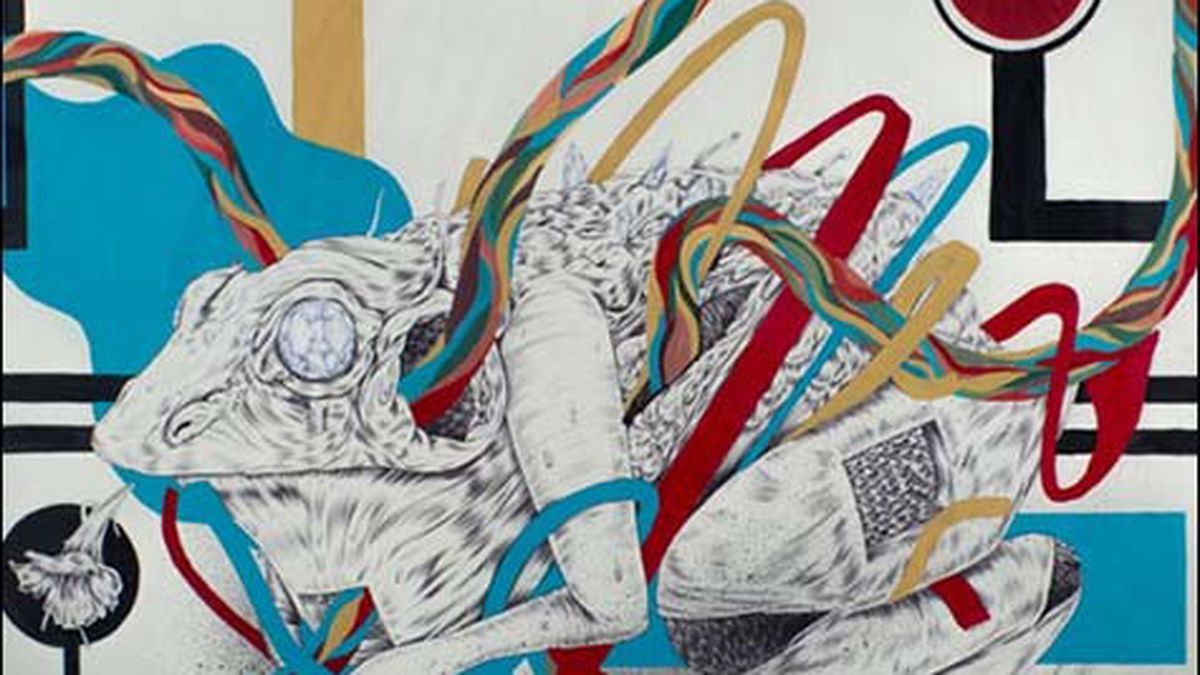 On the surface, Brett Flanigan and Cannon Dill may seem like an unlikely artistic pairing. Flanigan’s abstract works combine geometric patterning with organic forms to create engrossing, colorful scenes. Dill, on the other hand, draws detailed, folky animals using black-and-white lines. Both Oakland-based artists seek to challenge the aesthetic comfort zone and, together, they work seamlessly.

Last year, they packed a car with paint and took off on a month-long cross-country mural tour. Although they only had one mural planned ahead of time, they ultimately completed nine. While they’ve since moved on to new chapters in their respective careers, Flanigan and Dill continue to team up to push the boundaries of everyday experience.

Their latest collaboration is White Forest Noise, a split show now on view at LeQuiVive Gallery (1525 Webster St., Oakland). The show is based on shared experiences — specifically, on solo night hikes each artist recently took in Marin. As they explained in a recent interview, they drove to the woods together, but began their hikes at staggered times. Leaving flashlights behind, they let the sounds of the forest envelop them, allowing their minds and bodies to wander, then returned to the car to jot down their thoughts. “We were getting all these crazy, semi-hallucinogenic experiences on it, too,” said Dill. “That’s why it’s called ‘White Forest Noise,’ because it sounds like static but its just trees colliding into each other.”

The resulting works emphasize the perceptual differences between the artists, forming a visual rhythm that contains just the right amount of syncopation to keep the viewer enamored. Dill’s pieces are slightly more refined than those of his expansive solo show at LeQuiVive last spring. With impressive detail, he creates figures — rabbits, wolves, and other characters — by threading together languid lines to form what resembles drawn embroidery. The images fit neatly within the dark world of his body of work. They’re not entirely sinister, but resemble mythical gods that demand reverence.

Flanigan’s work, conversely, steers away from the figurative and into the increasingly abstract. With almost computer-like execution, he uses clean lines and color gradation to create a narrative of exuberantly fluid colors weaving their way through patterns and grids. Flanigan generally bases his work on restriction and intuition, and he takes that practice further in this show by initially covering his canvases with tape and peeling it away as he paints.

White Forest Noise also includes a collaborative mural, which visually fuses the rest of the works. For Flanigan, working with Dill offers another inhibition that ultimately benefits his process. But when asked why else he thinks their styles work together, he said, “I just think the balance of opposites is a cool and beautiful thing in general.”

Burning Man Says that They Control Your Photos/Videos for the Good...