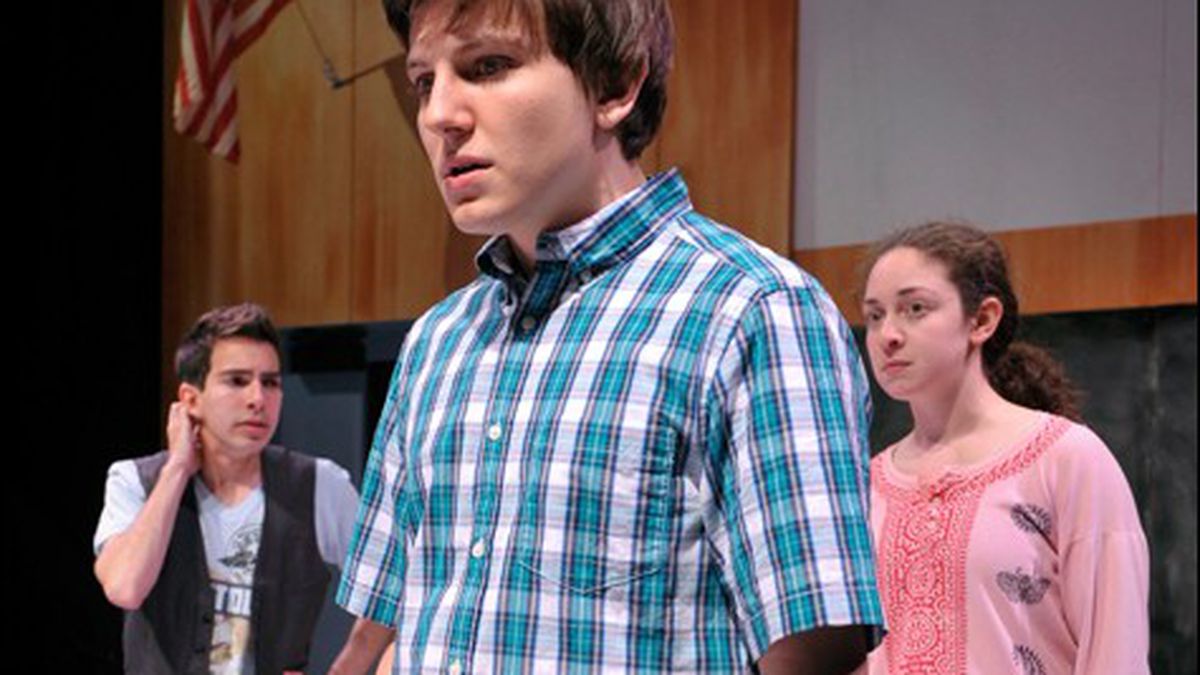 New Aurora Theatre production brings the dramedy without the dénouement.

Linear narratives just aren’t the thing any more. Or so one would think after watching Speech & Debate, the latest in a spate of post-modern “dramedies” to hit the Bay Area. Written by Stephen Karam and first produced in 2006, it’s a fast-paced, snarky take on teen life in small-town Salem, Oregon. All the main dramatic events happen offstage, and most of the plot consists of characters exposing or cross-examining one another. It’s meta throughout, not just because of the inter-textual references, but because the script pretends to be about one thing (three teens uncovering a sex scandal), and turns out to be about something else (public and private space in the age of social networking). That’s a difficult format to contain, let alone dramatize. Yet, with the help of a few visual aids and some interesting stage configuration, director Robin Stanton figures out how to make it legible. What’s more, Stanton’s new production at Aurora Theatre has all the contemporary slickness that Karam was going for, but manages, somehow, to be a sweet, cute, traditional comedy.

Which isn’t to say that the plot fits like a glove. It’s a weird story told in a weird way. Karam presents the problem in the first scene, before we’ve even met the characters. A high school drama teacher is soliciting his male students in cyber space. We know him first by a chat-room alias (BiGuy), then by an e-mail address ([email protected]), then by his real name, Mr. Healey. In the second scene we meet Solomon (Jason Frank), an aspiring journalist — and deep Googler — who wants to expose the scandal for the school newspaper. To do that, he needs the help of nerdy podcaster Diwata (Jayne Deely), and effeminate chat-room surfer Howie (Maro Guevara), who each have their own motivations. Diwata wants to launch a school speech and debate club to help jump-start her acting career. Howie wants to start a gay-straight alliance. What began as a Hardy Boys story becomes a more conventional teen drama, in which the three outcasts unravel each other’s secrets. Angst ensues, and these three kids handle it the old-fashioned way: By bursting into song.

Though Glee is an obvious comparison, a more proper analogue might be Enrique Urueta‘s Learn to Be Latina, which just played at Impact Theatre earlier this year. Like the Urueta play, Speech & Debate deals with relevant social issues without ever resolving them. It incorporates text-based relationships. It introduces a problem straight-away, and makes it infinitely more complicated as the play moves forward. And when the drama starts to boil over, it devolves into musical theater.

And the three characters in Speech & Debate seem hard-wired for the dance routine that will inevitably follow. Diwata is a geek-girl with a waitressing job, a wardrobe full of striped knee socks, and an incurable scowl. She spends most of the play grousing about injustices in the school drama department and likening Salem, Oregon to the Salem, Massachusetts of Arthur Miller‘s The Crucible. Deely is perfect for the role. She has the cute curly hair, the surly bearing, and the pipes necessary to handle several arias. Guevara’s Howie is rail-thin and fey, with a narrow face and a big Adam’s apple. His gay accent sounds true-to-life (sample line: “You’re a freak!”). Solomon is the repressed teen from central casting, with his preppy khakis and alligator polo shirts. He mispronounces words (“cache” becomes “catch”), uses face powder to conceal his acne (as Diwata cruelly points out), and appears to have a prurient interest in Healey’s cybersex scandal. He could easily be the play’s most irritating character, but Frank makes him genuinely sympathetic.

Stanton and set designer Eric Sinkkonen find creative ways to convey the private-public dynamic that informs Speech & Debate. About half the scenes take place in a school classroom, where the three teens volley insults at one another. But the more confessional moments happen in cyberspace. In some moments, the three characters sit alone at their separate desks, typing into their personal laptop computers. Diwata produces a dishy podcast in which she details all the malfeasance at the school drama department. Howie cavorts through chat rooms using the radio handle “BLBoi.” Solomon eavesdrops on the other two.

Speech & Debate is certainly a clever and entertaining play, though it’s not always satisfying. It’s refreshing to hear naturalistic teen dialogue (a string of slang words, acronyms, and interjections), and to see computers portrayed as an essential part of quotidian life. The first scene consists entirely of an IM dialogue between BLBoi and BiGuy, in which they set the plot up without uttering a single word. Projection designer Christina Novakov-Ritchey contributes between-scene video montages that hew to the themes of the play — one consists entirely of portal imagery, another of ejaculation metaphors (e.g., fireworks and a bottle of champagne being uncorked). Such artistry almost compensates for the lack of a concrete dénouement. Almost.

Facebook
Twitter
Linkedin
Previous articleWhitman Could Save 64% on Energy If She Went Green
Next articleWednesday Must Read
18,644FansLike
0FollowersFollow
67,429FollowersFollow