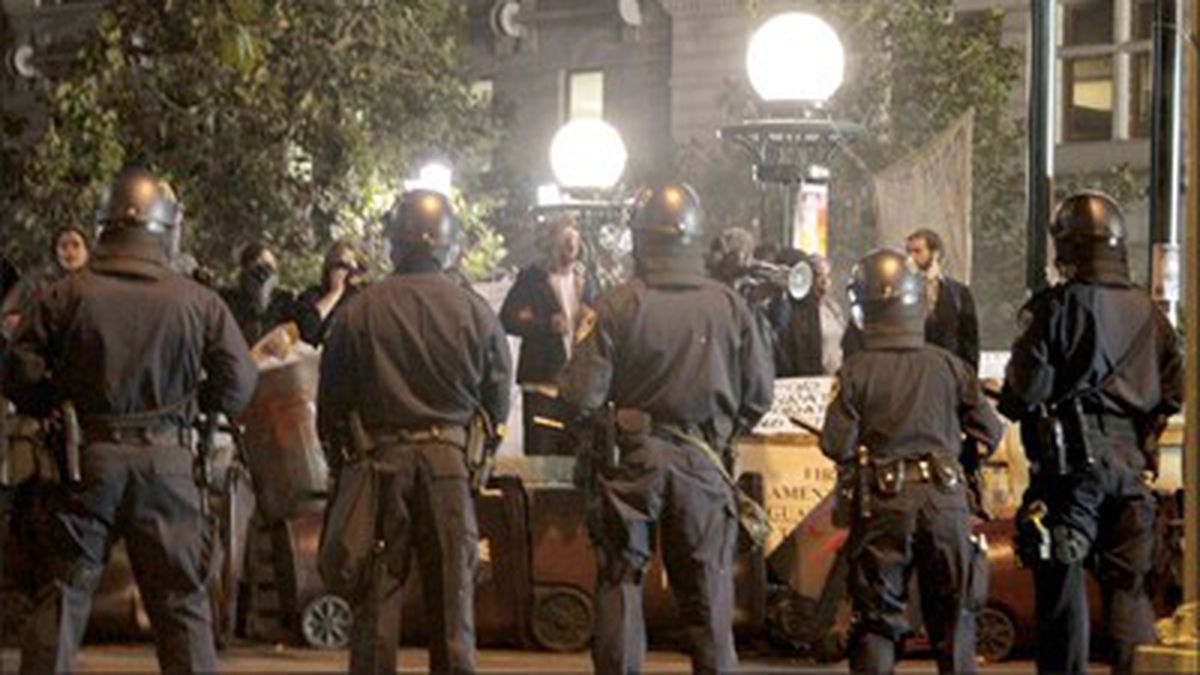 Chief Jordan announces new a crowd-control policy that civil rights lawyers say is weaker than the old one as a new report criticizes the department for making no progress on its reforms.

A little more than a week before the highly anticipated May Day protests, Oakland’s power structure gave a clinic on how to get out in front of a story. With the entire Oakland police command staff, Mayor Jean Quan, City Administrator Deanna Santana, and clergy members arrayed behind him, Police Chief Howard Jordan announced an overhaul of OPD’s crowd-control policy. “Our overarching goal is to facilitate these marches, these expressions of First Amendment rights,” said Jordan, announcing the department’s intention to increase use-of-force reporting, train all officers in crowd-control techniques, and use smaller, more mobile squads to arrest alleged troublemakers in large crowds.

But the backdrop to Jordan’s announcement were two long-awaited reports on OPD’s conduct over the past several months during Occupy Oakland protests — one from the independent monitoring team tasked with overseeing the reforms mandated by Oakland’s nine-year-old federal consent decree, and a second report analyzing key incidents involving alleged police brutality — including Scott Olsen, Kayvan Sabeghi, and Scott Campbell.

However, Jordan’s announcement on the planned overhaul of OPD’s crowd-control policy caused consternation among civil rights lawyers who helped devise the old policy after officers fired on anti-war demonstrators in 2003. Attorneys Rachel Lederman and Jim Chanin allege that the policy revisions are not reforms, but actually loosen restrictions on firing less-than-lethal munitions at protesters. “The Crowd Control Policy adopted in 2004 absolutely prohibits beanbags and similar weapons as a method of crowd dispersal or for individuals to be targeted if they are in the midst of a crowd where “innocent bystanders” might be hit,” said Lederman of the National Lawyers Guild.

Though emails between civil rights attorneys and city lawyers indicated that the policy would not be in place in time for the May 1 protests, Oakland authorities’ intention to switch from a court-ordered crowd-control policy to one with fewer limits on less-than-lethal force is perplexing. The fallout from the police response to last fall’s demonstrations — particularly the decision to use crowd-control munitions on demonstrators in apparent violation of OPD’s own crowd-control policy — has pushed OPD closer to federal receivership.

According to an April 18 memorandum from Jordan to Santana, thousands of complaints relating to police conduct during last fall’s Occupy Oakland demonstrations overwhelmed the department’s investigative capacity. Because of the volume of complaints and the involvement of Internal Affairs Division personnel in crowd-control operations, the city decided to farm out the investigations to a third party: Frazier Group LLC, a police-practices consultant already conducting an independent review of the Occupy-Oakland response. The city tapped the Frazier Group in February to conduct 38 investigations into alleged misconduct from last fall — including the high-profile uses of force against Olsen, Sabeghi, and Campbell.

The city administrator’s decision in mid-April to postpone a proposed $250,000 increase in the Frazier Group’s contract for this work, coupled with at least a month’s delay by city officials in getting the proposal ready, means that OPD complaint investigations will fall short of the court requirement that they be completed within 180 days. “Due to the time it has taken getting a vendor selected and hired, it is now impossible for the Department to meet compliance with the timeliness requirement in the NSA [negotiated settlement agreement],” the April 18 memo stated.

OPD’s failure to complete Occupy-Oakland-complaint investigations is consistent with the department’s lack of progress on its federal reforms. The monitor’s latest quarterly report, released on Monday, states that from January 1 through March 30 of this year, “there has been an outright stagnation in the overall compliance picture.” A similar lack of progress was noted in the monitor’s most recent report in January. Last fall, US District Court Judge Thelton Henderson gave the monitor greater control over policy decisions (viewed by many observers as a partial step toward receivership) and warned that the monitor’s next report would weigh heavily on whether or not OPD would be taken over by the court.

Despite years of admonitions by Judge Henderson, vows Quan made last year about getting OPD into long-elusive compliance, and the delegation of policy oversight to the monitor last winter, the department has failed to deliver on promises to reform. At the same time, Quan appears to be soft-pedaling the very real likelihood of OPD falling into an unprecedented federal receivership. In her weekly newsletter of April 27, the mayor wrote: “When Deanna Santana and I became the first City Administrator and Mayor to appear in [Henderson’s] court and offer to become more directly involved, he gave the city more time and but ordered the monitor to also become more involved in policy decisions.”

Chanin — who, along with John Burris, filed the class-action lawsuit for victims of four rogue West Oakland cops that underpins the consent decree — said a visit to Detroit in late April convinced him that consent decrees are effective tools for reforming police departments. Since 2003, Detroit police have been under two separate consent decrees following revelations of questionable officer-involved shootings and substandard murder investigations. “Detroit proved to me beyond the shadow of a doubt that these reforms can be achieved,” Chanin said. Over the past three years, Detroit’s compliance rate with consent-decree-mandated reforms has risen from 18 to 83 percent. During the same period, we’ve had no progress at all in Oakland.”

Detroit had fewer complaints from 2010 to 2012 than Oakland, even though the city is larger, has more officers, and routinely ranks among the most dangerous cities in the country. Like OPD, Detroit police have struggled with budget cuts and layoffs: More than 350 police employees are expected to be laid off in the next few months.

Much fanfare was made in November of the monitor’s announcement that it would conduct its own investigation into Occupy Oakland. However, the newest report indicates that Robert Warshaw’s team deferred to the Frazier Group’s own probe and OPD’s own Criminal Investigations Division, which is reviewing incidents for criminal liability. The release date of the Frazier Group’s report, which was expected to be highly critical of the police response, has been postponed indefinitely. The Frazier Group did not return requests for comment.

The monitor, meanwhile, will conduct its own review of whether OPD violated its existing crowd-control and use-of-force policies once the department’s internal investigations are completed. Nonetheless, the monitor’s report contains critical insights into uses of force on October 25 and November 2. In the case of Scott Olsen, the report confirms that the Marine veteran was seriously injured by a drag-stabilized beanbag round fired by an Oakland police officer: “[I]t has been confirmed that what struck the citizen [Olsen] in the head was a beanbag round that was fired by OPD. This is allegedly confirmed by [police lapel camera] video and actual evidence. Specifically, OPD had retrieved the hat worn by the citizen, which shows green dye residue. (The beanbag rounds used by the SWAT team on October 25, 2011 leave a green dye when they impact with the target.) An additional dimension of this investigation is that while the crowd formed to assist the citizen, an officer threw a canister of tear gas into the crowd.”

The report also takes to task OPD Captain Ersie Joyner and Officer Victor Garcia for shooting Campbell on November 2 with a shotgun-fired beanbag. Joyner reportedly gave an order to fire on any demonstrator who approached a line of officers at the north end of Frank Ogawa Plaza. The monitoring team concluded that Campbell’s shooting was a violation of both the use-of-force and crowd-control policies because of a lack of an audible warning, and noted that Internal Affairs sustained a finding of excessive force against Garcia.

Given the severity of injuries inflicted on Olsen, Sabeghi, Campbell, and dozens of other protesters last fall (the National Lawyers Guild has filed fifteen government tort claims, the precursor to civil lawsuits, on behalf of demonstrators injured during the October 25, November 2, and November 3 protests), and a hotly disputed mass arrest on January 28, the rationale for altering Oakland’s crowd control policy appears to be questionable.

Quan has presented the overhaul as a necessary update to outdated policies. In her weekly newsletter of April 27, Quan touted the responsibility of Jordan and Santana in dealing with the mass demonstrations of the past several months and claimed: “Crowd control policies last changed during the Iraq War demonstrations have been updated to meet the current state standards.”

In addition, OPD Deputy Chief Sean Whent, a former internal affairs investigator now in charge of Risk Management, maintained that the new standards would not alter how OPD officers use crowd-control munitions. “There’s nothing new in there regarding less-lethal force,” Whent said. “It just provides more guidance to the officers in individual situations.”

But Lederman, who helped litigate the civil case that produced OPD’s old crowd-control policy, argued that shifting to one that is based on California’s Peace Officer Standards and Training, as Jordan intends to do, would actually loosen restrictions on uses of force as well as guidelines for mass arrests and declaring unlawful assembly. Not only is OPD currently in litigation over a November 5, 2010 mass arrest of more than 150 people following ex-BART officer Johannes Mehserle’s sentencing, but Lederman said the January 28 arrest of 409 people demonstrated that OPD does not learn from past mistakes. In depositions for the November 5 litigation, Lederman said that OPD Captain David Downing, who was in charge of operations that evening, couldn’t recall the last time he received crowd-control training. &#8;

Correction: The original version of this story erroneously stated that the city council had rejected a new $250,000 contract for Frazier Group LLC.

Our top DVD picks for the week of October 17:

Sandra Cantu Murder Must Have Been Horrific