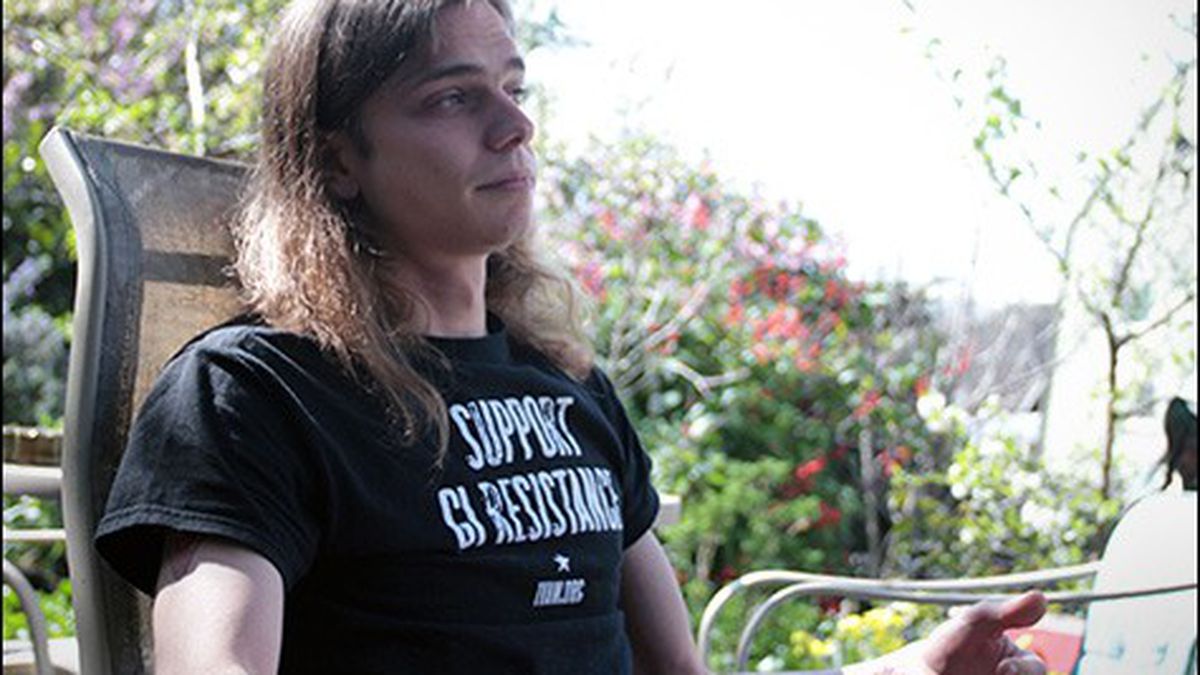 The department promoted two officers who were involved in a case in which the city agreed to pay an Iraq War vet $4.5 million for the injuries he received.

Late last week, the City of Oakland made national headlines when it agreed to pay a $4.5 million legal settlement to Scott Olsen, the Marine Corps veteran who was critically wounded by Oakland police during a confrontation with Occupy Oakland protesters in 2011. Yet despite the large payout (which was first reported by the Express on its website), the Oakland Police Department brass promoted two cops who were involved in the Olsen incident. In fact, one of the officers — then Captain Paul Figueroa — is now the assistant police chief, and is the second most powerful person in the department.

OPD dispatch tapes from the night of October 25, 2011 highlight Figueroa’s role in the unwarranted use of force by police officers on demonstrators. At about 7:25 p.m., Figueroa told the police officers at the intersection of 14th Street and Broadway that “we’re going to stick with announcements, our goal is to allow them to peacefully protest, and we’ll facilitate it then best we can ….”

But then, just minutes later, at 7:28 p.m., Figueroa ordered officers to put on their gas masks — a preparation for the use of tear gas — and to make announcements to disperse the crowd of demonstrators. At 7:34 p.m., Figueroa told his officers to “watch out for projectiles, we haven’t seen any yet, just watch for them.” Three minutes later, Figueroa said: “We’re going to let them peacefully protest, we’re going to continue to make announcements [to disperse] ….”

At the time, Figueroa was addressing commanders of OPD’s Tango Teams — tactical squads of five officers and one sergeant each, which were armed with shotgun-fired less-than-lethal rounds, tear gas, and flash-bang grenades. As the Express reported in December 2011, those teams also included several OPD officers who had used deadly force in the past and had been involved in numerous use-of-force cases over the years.

Then, at 7:40 on the evening of October 25, 2011, Figueroa ordered Tango Team sergeants Roland Holmgren and Patrick Gonzales to disperse the crowd. “Tango Team deploy gas, deploy gas into the front of the crowd,” Figueroa said over the radio.

Eighteen seconds later, an unnamed OPD officer shot Olsen in the head with a beanbag round that consisted of lead birdshot wrapped in cloth. At the time, Olsen, 24, was standing about fifteen feet from the Tango Teams at 14th and Broadway. The firing of the beanbag round was a blatant violation of OPD’s crowd control policy. Then, while Olsen lay on the ground, an Oakland cop lobbed a flash-bang grenade into a group of people who had rushed in to help the wounded veteran. Video of a dazed and bleeding Olsen being carried to safety by fellow demonstrators quickly went viral and was seen by people around the world within hours. Olsen, who is now 26, has permanent brain damage.

At the time of the shooting, Figueroa had no business being the incident commander or accepting the position: He was the head of the department’s internal affairs division. As such, he would be responsible for investigating any misconduct stemming from that incident. It was a clear conflict of interest. As it turned out, OPD botched both the administrative and criminal investigations into the Olsen shooting. To this day, the department has yet to identify the officer responsible.

That promotion came despite the fact that former OPD consultant Thomas Frazier had singled out Holmgren for submitting alarmingly similar reports from officers who were at the scene when Olsen was shot. The officers all said in their statements that they did not see Olsen lying in front of the barricade after he was shot. They also said they did not see the people who came to his assistance or the flash-bang grenade thrown at those people. Frazier said the reports submitted by Holmgren from officers Michael Leite, Todd Martin, Thomas Sotto, Chris Saunders, and Robert Roche were not credible.

Frazier made those comments in a highly critical report on OPD’s response to Occupy Oakland. “After review of hours of video footage involving the injured party (who appears to be approximately 15-25 feet in front of the police skirmish line when he was struck and fell to the ground), the fact that no law enforcement officer, supervisor, or commander observed the person falling down or prostrate in the street during the confrontation was unsettling and not believable,” Frazier wrote in his report.

Then-City Administrator Deanna Santana attempted to redact portions of Frazier’s report that concerned details of OPD’s misconduct, including criticisms of the department’s inadequate planning before the October 25 raid on Occupy Oakland; the use of internal affairs officers during the raid on the Occupy encampment and during the protest later that day (including Figueroa); failures by the department to follow its own crowd-control policy; a seriously mishandled criminal investigation into the wounding of Olsen; revelations that Olsen was gravely wounded by a beanbag round identical to the ones used by OPD that evening; and serious misgivings from OPD officers who told Frazier’s team about the department’s lax attitude toward misconduct and discipline.

Holmgren also had been involved in the illegal use of force against anti-war protesters at the Port of Oakland in 2003. And he was involved in a drunken brawl with prison guards at a charity boxing event in 2010. He also was disciplined for turning off his chest-mounted camera during clashes with Occupy Oakland demonstrators on January 28, 2012.

In addition, in 2012, independent investigator Jacob Crawford and I identified Roche (whose report Holmgren submitted) as the Oakland police officer who lobbed the flash-bang grenade toward Olsen and the group of people who rushed to his aid. (Full disclosure: Crawford worked as an investigator for Olsen’s attorneys, Jim Chanin and Rachel Lederman, in the case against the city. I was not involved in the lawsuit.) OPD fired Roche for his actions, but he is challenging the termination in arbitration.

Oakland police officials did not respond to questions about why Figueroa and Holmgren were promoted in light of their involvement in the Olsen incident and other use-of-force cases.

In a statement, Oakland Mayor Jean Quan expressed regret at Olsen’s injuries and said OPD had since reformed its crowd control policies. “We regret that Mr. Olsen suffered these injuries and hardships,” Quan said, “and I want Oakland to know that because of that evening’s events we took determined, constructive steps to change our policing procedures.”

Although OPD’s crowd control policy was recently revised as part of the Spalding et al v. Oakland settlement for a November 2010 mass arrest of Oscar Grant protesters, the department still has tear gas, blast grenades, and less-than-lethal beanbags as part of its crowd control arsenal. Other Bay Area law enforcement agencies, such as the San Francisco Police Department, do not allow the use of tear gas.

The Oakland City Attorney’s Office said in a statement last week that the city will pay $1.8 million of the settlement with Olsen, and that the city’s insurance carrier will pay the rest of the $4.5 million. To date, Oakland has paid out $6.3 million in legal settlements for police misconduct during Occupy Oakland demonstrations. A class action lawsuit over the mass arrest of hundreds of demonstrators on January 28, 2012 is still in the courts.

As for Olsen, he said he’s relieved that his injuries were not worse. After the shooting, he temporarily lost his ability to speak and perform basic motor functions, and while he has improved significantly with therapy, his memory, concentration, and speech are still impaired. His current medical expenses are more than $200,000. “I’m grateful this is over,” he told me in an interview just before the legal settlement was announced. “It’s been very difficult to think about or plan for a future during this lawsuit.”

Olsen said he hopes OPD discontinues the use of flash-bang grenades and less-than-lethal beanbags so no else gets injured liked he did. To this day, being at the intersection of 14th and Broadway makes him uncomfortable, as does being around police. “When I talk to police now, most of the time I’m shaking inside,” he said.

The Alameda County District Attorney never filed criminal charges against Roche or other OPD personnel for their conduct during the Olsen incident and subsequent investigation.

“There’s no positive result in this,” Jim Chanin said. “Scott Olsen has a permanent injury, and the city has lost millions of dollars.”

When asked last Friday by a reporter if he felt like he had won, Olsen replied, “I didn’t win part of my brain back that’s dead. I thought I wasn’t in Iraq anymore. I thought I was safe.”