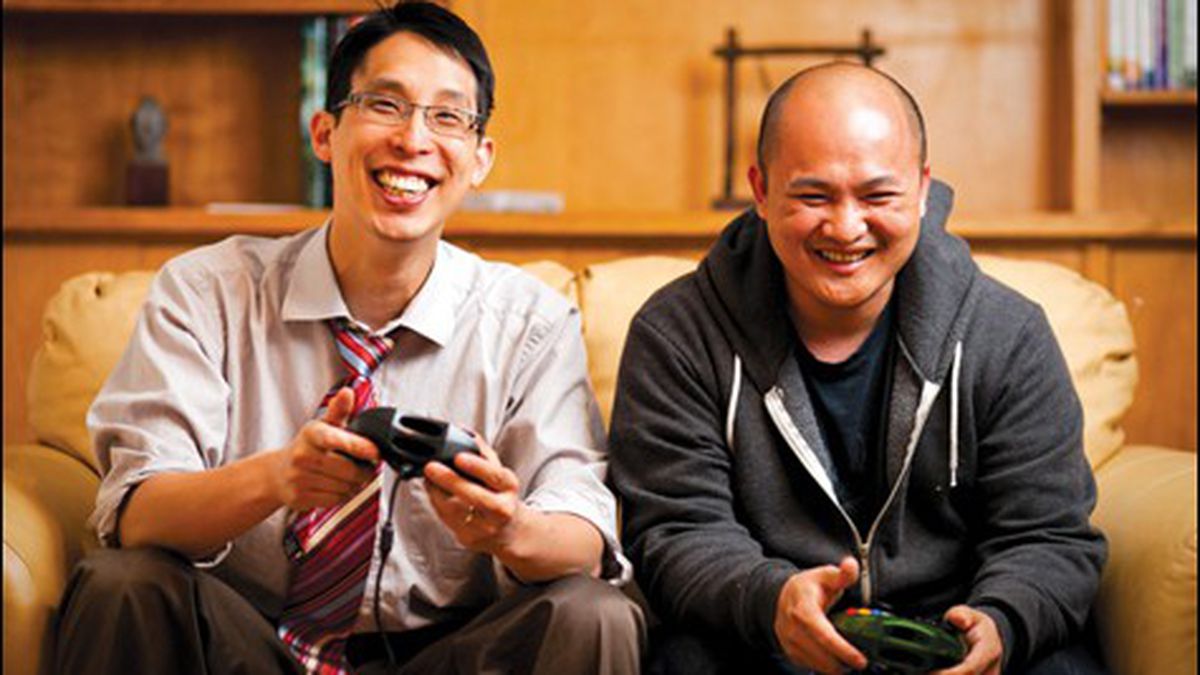 When Gene Yang was growing up, his dad wanted for him what any self-respecting Asian immigrant wants for his child: that he become a doctor, a lawyer, an engineer — something practical. All Yang wanted to do was draw comics.

It’s a familiar theme, that tension between following your heart and honoring your parents — and one that Yang saw playing out all the time in pop culture, always with the same moral. Call it the “Bend It like Beckham” theory of happiness: Whatever old-fashioned ideas your parents might have, you should try to play soccer professionally if that’s what you want to do. Go ahead, become an artist, a dancer, a chef.

Of course, Yang ended up pursuing the arts after all and found success, perhaps beyond his wildest dreams. The Fremont resident’s 2006 graphic novel American Born Chinese was a National Book Award finalist for Young People’s Literature, bringing the ethnic identity issues facing Asian-American adolescents into the spotlight and propelling Yang to national fame.

But over the years, Yang says, he’s thought a lot about those arguments he used to have with his dad — about the bitterness that so many first- and second-generation immigrant kids feel about their childhood. Now that he has children of his own, Yang thinks about the things he wants to teach them. And, at a time when it’s de rigueur for progressive-minded Asian Americans to bash on Amy Chua and the scourge of Tiger Mom-dom, he considers a possibility no one likes to dwell on much: What if mom and dad were right all along?

At the very least, Yang says, “I just don’t think the resolution is completely turning your back on everything your parents say.”

For his latest young adult project, Yang teamed up with his friend and fellow comics artist, Thien Pham, to write Level Up, which will be released by First Second Books on June 7. The graphic novel tells the story of Dennis Ouyang, a college student who’s torn between his love of video games and his deceased father’s desire for him to become a doctor — and not just any doctor but a gastroenterologist: a “poop doctor.” The burden of that expectation haunts him, literally, in the form of four pint-sized angels who appear mysteriously to cajole and nag him toward fulfilling his destiny — miniature “Tiger Moms,” if you will.

It’s a tale that’s by turns mildly trippy, scatologically jokey, and unapologetically earnest. But at its heart, Level Up is about coming to terms with the struggle that so many young people face — Asian Americans often just in more obvious ways than most — to reconcile their own hopes and dreams with the demands and expectations of their parents.

Yang and Pham have been friends for a long time — and co-workers, too, as both have day jobs as teachers at Oakland’s Bishop O’Dowd High School. But in some ways they’re an odd couple: Yang is tall and bespectacled, mild-mannered, introspective, more sarcastic than you’d expect. He looks more like a tech guy than an artistic type — heck, he is the tech guy at O’Dowd. Pham is the outsized personality: the smack talker, the maker of outrageous statements. Everyone is his “bro”; everyone gets a big smile.

Artistically speaking, too, theirs is a bit of an unlikely collaboration. If you look at American Born Chinese, or any of Yang’s drawings, you’re struck by the clean lines and crisp colors. For Level Up, Yang was the one who wrote the story and came up with the concept, but Pham did all of the art, employing a drawing style that’s simple and perhaps slightly old-fashioned, everything done with pen and watercolor. He’ll shift into monochrome for pages at a time, and those panels are tinged with nostalgia and melancholy — there’s one lovely image of the protagonist chucking a handful of arcade tokens across a moonlit sky.

The overall effect is less precise and a little bit rougher around the edges than Yang’s previous books, but Pham says that’s in keeping with his own artistic philosophy: “I just throw it down.”

What both artists bring to the table is the particular baggage that children of Asian immigrants often talk about: the pressure to be academically successful, the sometimes-pervasive emotional distance, the push toward practical career choices.

For Pham, who is of Vietnamese descent, his parents seemed to give up on the idea of him becoming some kind of doctor or whatever by the time he got to high school. But for years after that he was still plagued by guilt that he wasn’t adequately repaying their sacrifices.

“Because Asian parents, if you took away the guilt, they have no power,” he said. “That was all it was — it was all about the Asian guilt.”

Both Pham and Yang have brothers who did go into the medical profession, and Pham says for years his parents would brag to their friends about all of his brother’s successes without ever mentioning that they had another son.

And Yang still recalls, vividly, those tense conversations with his father about what kinds of occupations were “practical” enough. But as he’s gotten older, he’s grown increasingly disillusioned with the notion, perpetuated by any number of Hollywood movies and Disney animated features, that people should always do whatever their heart tells them to do.

“Both [Thien and I] know people who have followed their heart and only their heart, and sort of forgotten everything practical,” he explained. “In real life it doesn’t always lead to happiness.”

At the same time, Yang started to have the sneaking suspicion that maybe his father wasn’t so unreasonable after all — that there was something essential behind that constant insistence that he become a doctor, a lawyer, or an engineer. He thought, what if it wasn’t just about the money or the prestige? What if it was more about using your talents to do some good in the world, about not just living selfishly to please yourself?

Maybe that was the key to striking that balance — to finding, as Yang put it, “some way of going about your life where you pursue your dreams while integrating the wisdom that you get from your parents.”

Writing Level Up was Yang’s way of sorting through some of these thoughts, and suffice it to say that the moral of the story is not that teenagers who love video games should pursue that obsession at the expense of everything else in their lives. But it also isn’t that young people should subsume their will wholly to whatever life their parents have imagined for them. Yang is happy to occupy a more ambiguous middle ground, both in the fictional coming-of-age stories he writes as well as in his own life:

“I think this is true for both Thien and me, that in a lot of ways, even though we are both pursuing the arts, I think we want to do it in a much more thoughtful and practical way than maybe we see in some of our peers.”

Pham, too, has made peace with his Asian upbringing — with how tough his parents could be on him and how from an early age he always had to work in the video store they owned. Now he thinks he wouldn’t have wanted to be raised any other way. Pham says he’ll walk into an Asian restaurant and see some ten-year-old kid serving tea and think, “‘Oh man, your life sucks!’ But at the same time … I remember when I worked with my parents. It sucked, but I remember it very nostalgically and not in bad terms now.”

That being the case, Level Up isn’t just for Asian kids. Pham stresses his belief that the book should have universal appeal, especially for young people who are still trying to figure out what to do with their lives. Or for anyone who can remember what that was like.