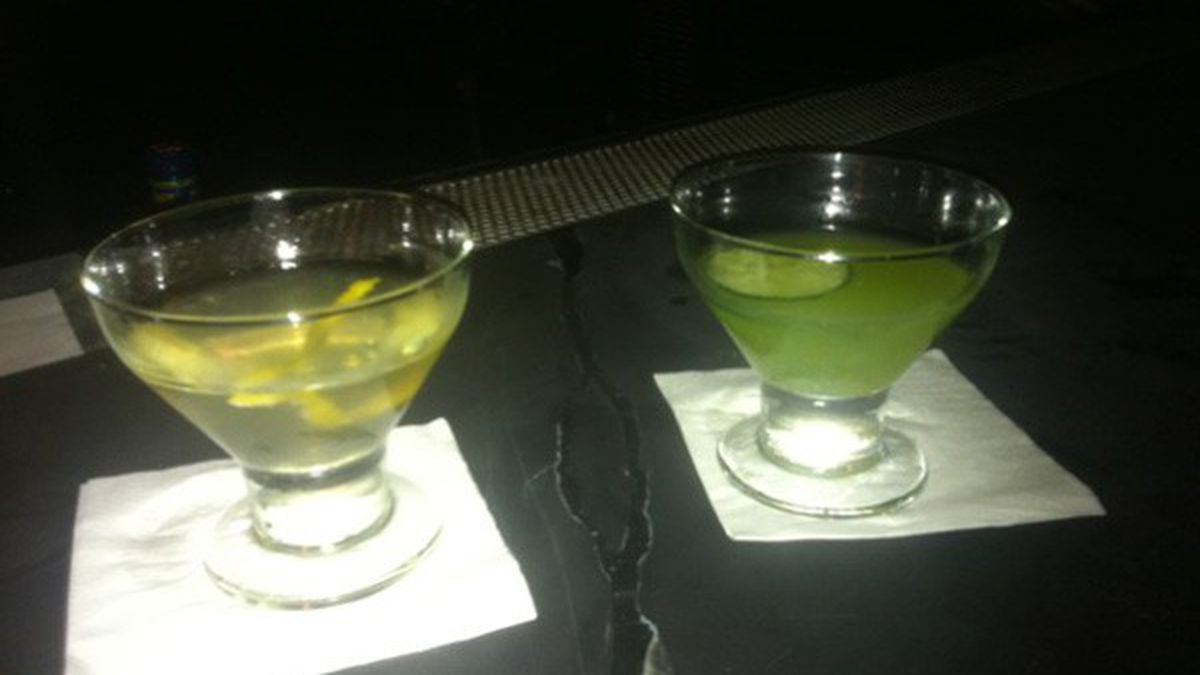 I’ll cut to the chase. You should go to the happy hour at Oliveto. Pick the soonest Tuesday through Saturday night that you have available. Immediacy is of the essence here — partly because the happy hour at Oliveto is unbelievably pleasant, and partly because it is not long for this world: According to the cafe manager, it’ll end when summer does, on some as-yet-undetermined date on or near Labor Day. Clear your schedule if you must.

Funnily enough, what’s killing Oliveto’s happy hour — the relative lack of nighttime foot traffic in the neighborhood — is also part of what makes it so pleasant. Because it’s at 9 p.m., and because it’s Rockridge, this isn’t a loud, pushy, fight-for-your-drinks/shout-to-be-heard/post-work-letting-off-steam kind of happy hour. There’s no weird lighting, no elbows to avoid, no throbbing music to compete with — and, sometimes, as when I went last week, not even any other patrons sitting at the stone-topped bar. Instead, the place features expensive-looking decor in various shades of warm brown, Buena Vista Social Club on the sound system, and a nearly empty room, save for a handful of staff and two couples quietly/tenderly/adorably sharing dessert. Oliveto is, of course, a very nice restaurant, so the whole thing is extremely pleasant — not for nothing would I later find that adjective in my notes no fewer than six times. But it’s easy to see why, from a cost-benefit perspective, all the effort may simply not be worth it for just a handful of customers. According to the same cafe manager, A.J., they’re considering other bar specials, though nothing’s set yet; he also said that even a small uptick in interest could persuade Oliveto to keep the happy hour going — hint, hint.

For the time being, anyway, happy hour runs every night except Sundays and Mondays in the space’s more casual downstairs cafe, and it’s actually an hour — from 9 p.m. to 10 p.m., as the waitstaff begins to clean up for the night and the last of the diners at the acclaimed upstairs restaurant float down the stairs, still gushing about their pancetta-wrapped rabbit loin and saffron-sardine salad. Five dollars gets you a glass of wine or a prosecco-rum-lime punch, plus access to whatever snacks come out of the small, open kitchen. In my case, that was a bubbly, cheesy, practically perfect slice of summer vegetable pizza with little bits of sausage. (It probably would have gone better with red wine than with the slightly sweet citrusiness of the punch, but I’ll consider that my mistake, not theirs.) On the kinds of warm nights we’ve been having lately, they keep the big picture windows open onto the street, the result of which is fantastic, surround-sound people-watching, as the attractive and quietly moneyed people of Rockridge walk dogs, take evening strolls, and hurry home from BART along College Avenue. The barstools have actual backs, the space is cozy without feeling claustrophobic, and the lighting is of the soft, golden-pink variety that seems to magically make everyone look happy and sparkly. And, for those so inclined, not only will the staff not treat you like a freak of nature for just wanting to sit there and read a book, but it’ll actually be possible to do so, given the lack of distractions. When you leave, the employees, well-trained as they are, will reflexively ask you to come back soon, and you’ll really wish you could.

Hot on the heels of Bar Dogwood and the new Rudy’s Can’t Fail (plus a few still-in-the-works new bars), Uptown now has yet another place to drink: Make Westing, a bocce bar that opened for business last Monday in a former jewelry store across 18th Street from Rudy’s. Founded by East Bay natives Glenn Kaplan and Chris Foott, Make Westing is housed in a big, industrial-looking space with two bocce courts located toward the back of the room. “It’s fun, it’s different, it’s a great drinking game — it makes us a little bit more than just a bar,” Foott said, and it appears to be working: On the two occasions I’ve visited in the last week, Make Westing has been reasonably — but not unpleasantly! — packed.

As for the drinks: There’s a slate of inventive cocktails for $8 ($6 during happy hour, which runs a generous three hours, from 4 p.m. to 7 p.m.), plus a handful of beers on tap. I tried the Garden Gimlet (gin, cucumber, basil, and lime — refreshing and summery) and the Killer Bee Martini (vodka, bärenjäger honey liqueur, lemon — kind of like an alcoholic Luden’s cough drop, in a good way), both of which were delicious. According to Foott, the bar menu — which was largely conceived by Caroline Pagel of Sea Salt — aims for “a smattering of esotericism, mixed with accessibility,” with premium but not insane prices. “I just want to make fun drinks that people can enjoy — and afford,” Foott said. Mission thus far accomplished.

People Under The Stairs

Oakland’s Play for the A’s