.Of Masa and Mole

At Tamales La Oaxaqueña, every leaf-wrapped package is a little bundle of fragrance, sweetness, and spice. 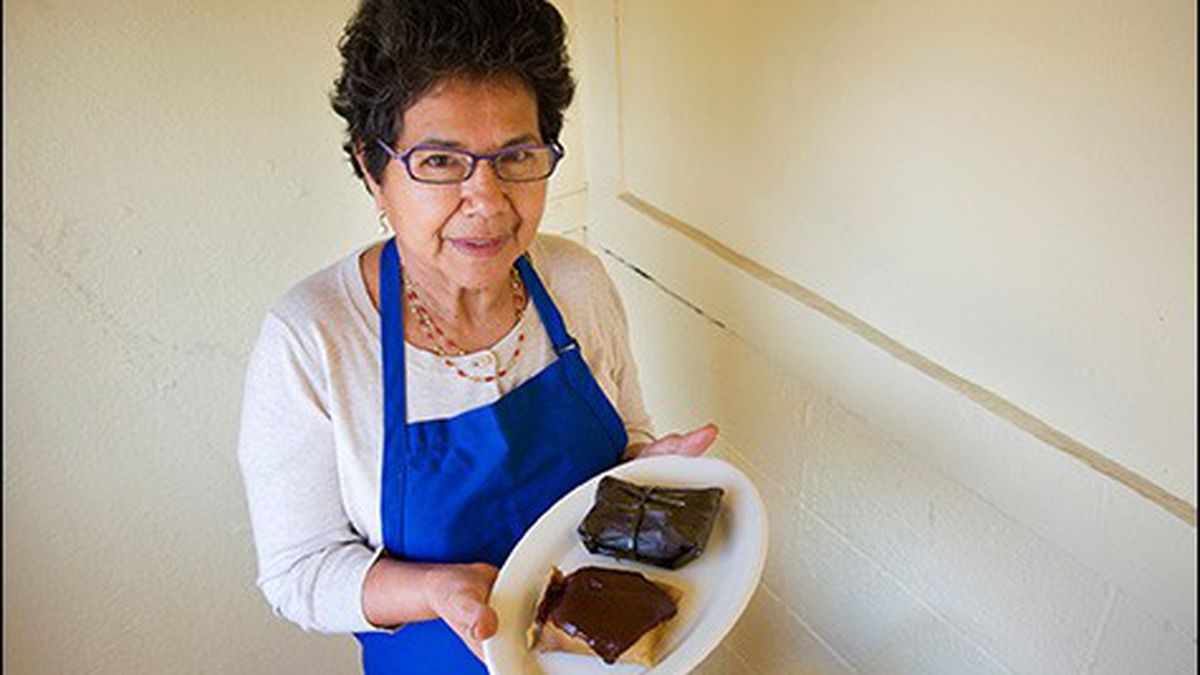 Any food that comes wrapped up in a tidy bundle can’t help but feel celebratory. The Chinese have zhongzi; folks from Barbados have conkies. In many parts of Mexico, of course, the go-to holiday dish is the tamal: masa, or corn dough, that’s filled with meat (or cheese or vegetables); wrapped up, usually in cornhusks; and steamed.

At Tamales La Oaxaqueña, a tamale shop in West Oakland that specializes in Oaxacan-style tamales — which are wrapped in banana leaves and filled with sweet-and-spicy mole — every leaf-wrapped parcel resembles a small present. The tamales are wrapped again in parchment paper, then tied up with a little bow, so there’s a moment of anticipation as you peel open the layers.

Needless to say, there’s no need to wait until Christmas to indulge.

Carolina Santos and her mother Rosa Oliva have been steaming tamales out of their tiny West Oakland kitchen for about a year, doing mostly pop-ups and catering gigs, and since January, they’ve been open as a restaurant — though their shoebox space is too small to function as much more than a takeout window.

This is a family business: Oliva, a former seamstress who has been refining her mole recipe since she was eight years old, is the chef and tamal-maker-in-chief. Santos runs the business side of the operation and acts as her mother’s de facto sous chef, assisting with tamal production and running errands. Oliva’s son, Ruben Oliva, often works the counter.

On Saturdays the owners set up a big blue tent in the lot outside, underneath which a Guatemalan woman, a friend of the family, griddles fresh pupusas. When the tent isn’t up, the place is easy to miss. Look for the gorgeous Oaxacan-textile-inspired mural, which covers the facade in vibrant reds and blues.

Oakland has no shortage of tamale shops, many of them quite good, but only this one specializes in banana-leaf tamales — in Oaxaca, the tropical climate and ubiquity of banana plants make this a logical substitution. Tamales La Oaxaqueña sells cornhusk-wrapped tamales, too, and, comparing the two, the masa in the banana-leaf version seemed to be moister and more tightly packed, and had taken on the aromatic quality of the wrapper — reminiscent of wet tea leaves or the jungle.

Probably the best reason to make a special trip to this little tamaleria is for Oaxaca’s other famous specialty: mole. While there are as many varieties of mole in Oaxaca as there are Oaxacan grandmothers, Oliva makes two, and they’re exceptional: a dark mole negro and a cinnamon-y mole rojo, both made with an assortment of dried chiles (pasilla, guajillo, negro, and de arbol), ground almonds, slow-roasted aromatics, and a hint of Mexican chocolate. The mole negro had an earthy smokiness to it that comes from adding charred tortillas and toasting the chiles until they’re almost burnt. The mole rojo, which had ripe plantains and raisins, was a little bit sweeter. Both moles had a mild, lingering heat that helped to offset the sweetness.

The mole tamales come with either pork or chicken, but, really, it’s all about the sauce. The meat mostly serves as a canvas, and a savory counterpoint. And the masa itself — fresh, fluffy, and fragrant — might be the very best vehicle for mole.

Vegetarians have options, too. There was a banana-leaf tamal that was filled with corn and roasted zucchini. Better yet was the classic cheese-and-roasted-poblano tamal, which is an especially good choice for those who don’t like mixing sweet and savory. I appreciated how the Monterey Jack stayed soft and oozy (not congealed, unlike so many cheese tamales).

By necessity, Tamales La Oaxaqueña has a limited menu, and at any given time as many as half the items listed might be sold out. Depending on what the shop has on hand, a tamal that came with mole rojo one time might have mole negro the next. Sometimes the chicken tamales are made with the breast; other times, if you’re lucky, they’re all dark meat (and that much more tender).

In addition to the tamales, there’s also a small selection of burritos and tacos, but there are better options in Oakland if you’re in the mood for a steak burrito. (The least successful dish I sampled was a rather dry, unmemorable pork al pastor special.)

Oliva also whips up one or two off-menu dishes, and if you’re lucky, she might have a few hard-to-find Oaxacan specialties on offer. For instance, one Saturday she made me a tlayuda, a traditional Oaxacan street snack that looks something like a salad “pizza” — a thin baked tortilla, as large as a New York City pie, topped with refried beans, cabbage, lettuce, pickled nopales (cactus pads), and shredded quesillo (the Oaxacan equivalent to string cheese). Oliva doesn’t make the tortilla base in-house (it’s brought in from Mexico), so that part of the dish was less crunchy and more stale than I would have liked. But the toppings were wonderfully fresh, with the nopales and the cheese adding a pleasant tang. It’s the perfect kind of thing to set out for your next big party.

On another Saturday, the special was a juicy, lightly battered chile relleño, one of the best versions that I’ve eaten in the past year. What was notable was the balance of flavors — the savoriness of the ground-beef-and-diced-potato filling, the bitter undertone of the roasted poblano, the sweetness of the plump raisins, and the slight prick of heat from the house-made chile de arbol salsa, which we requested on the side. (In general, Saturdays seem to be the day when the most interesting specials are available.)

Part of the restaurant’s charm is in how bare-bones it is. The only seating is a couple of mismatched tables crammed into the narrow corridor in front of the takeout counter. The beverage selection is a hodgepodge of whatever they have on hand in the fridge. Receipts, if requested, are hand-written.

But whatever amenities Tamales La Oaxaqueña might be missing, the tamales and the moles — a combination I won’t soon forget — make this a family business that’s worth supporting.