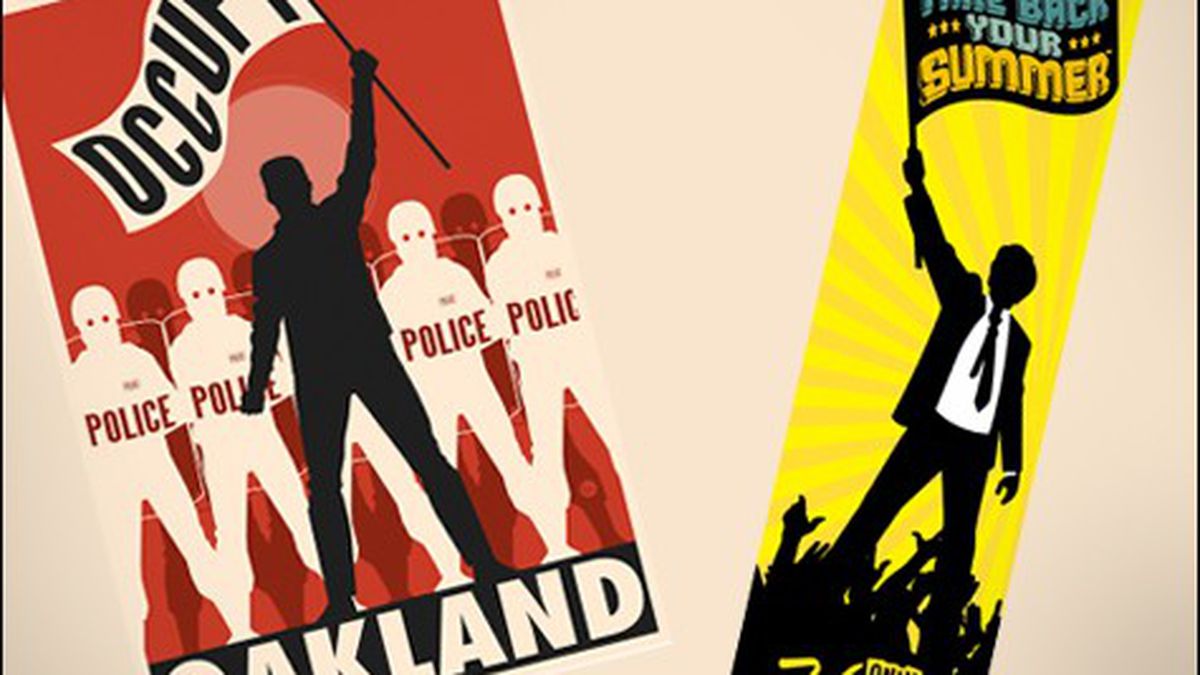 Did the Las Vegas tourism board copy a local artist's work?

Up until a few weeks ago, it’s fair to say that Rich Black kept a fairly distant relationship with corporate America. He makes his living as an artist, working mostly for performing-arts organizations — you may recognize him by the name he uses professionally, R. Black, or by the work he’s done as the in-house artist for the Berkeley theater company Shotgun Players and the local literary series First Person Singular — though he gained some measure of notoriety last year when a poster he created for Occupy Oakland made the rounds locally and nationally in the movement’s nascent days. He’s got a laconic, friendly speech pattern; a big, beautiful bird tattooed just under his right ear; and, though he doesn’t necessarily ascribe to any organized political label, he says he’s been “deeply moved” by the Occupy movement. Suffice it to say, he never expected to find what appeared to be a version of his own work used as part of — of all things — the Las Vegas tourism board’s summer ad campaign. But that’s exactly what happened.

For Black, it all began on October 25. That night Scott Olsen was hit with a police-fired projectile and the movement experienced its first true, high-profile clash with police, catapulting it into the national eye. Black came home after the protest — a little shaken by what he’d seen, but mostly inspired — sat down at his computer, and quickly knocked out a poster in Adobe Illustrator. He put it on Facebook and it quickly spread among his friends and followers, though it wasn’t long before he started seeing it in store windows and the hands of strangers. By November, it had quickly become one of the more recognizable graphics in a local movement full of them. At this point, Black’s seen it reproduced in various ways all over the place: as prominent B-roll in a twelve-minute Rachel Maddow Show segment about the November 2 General Strike, as part of the online literature for a farmworkers’ rights campaign in the Midwest, and on fliers and Facebook walls near and far. But he was still surprised when, on May 20, a stranger emailed to tell him that he’d seen an eerily similar image used in a web ad for the Las Vegas tourism board.

Side-to-side, the two images look something like fraternal twins: alike enough to be created by the same person — or, at the very least, by people with similar sensibilities — but certainly not exact copies. Black’s version, striking in red, black, and tan, features in its foreground a lone protester, his head framed by the sun and his body silhouetted against a line of police officers; a flag in the figure’s left hand says “Occupy” in bold type, and below him, in the same typeface, the poster reads “Oakland.” The Vegas version, meanwhile, works in a sexier palette of turquoise and yellow, and has done away with the police; the flag now says “Take Back Your Summer,” the campaign’s slogan. But the sun and flag still remain, and other than that, the poster’s style and central image is mostly unchanged.

For his part, Rob Dondero, executive vice president at R&R Partners, the advertising firm contracted to create the campaign by the Las Vegas Convention and Visitors Authority, said that the designers responsible for the ad had never seen Black’s work, and that any similarities between the two pieces were entirely coincidental. But the resemblance is uncanny, and Black’s hypothesis is that it was the result of a young, inexperienced designer replicating something he’d seen before out of necessity or desperation — which would certainly be plausible, given the poster’s web traction as well as the replicability and relative simplicity of its design. “To me, it looked like someone was under pressure and had to do something quick, like they were probably under a deadline or something,” he said. “It looks really like my poster, but whether it is or not, who knows.”

Ultimately, of course, there’s no real way to tell what happened. But either way, Black’s less angry than amused by the whole thing. After all, he intentionally distributed the poster without a copyright in order to make it easy for other activists to reproduce, so even if R&R has ripped the poster off outright, the firm would be in the clear legally. And besides, Black pointed out, art has a long history of parodying, echoing, and playing off of other people’s work for effect, from Sixties-era Uncle Sam and Rosie the Riveter takeoffs up to modern-day send-ups of the iconic “Hope” poster Shephard Fairey designed for the Obama campaign. Black himself freely admits that his own poster isn’t wholly original, using motifs culled from propaganda and pop-art to prove a political point. In the art world, the lifecycle of an image is long, and there’s no well-defined boundary between parody and plagiarism — and besides, Black said, all bets are off when it comes to advertising. “If you’re in commercial art, it doesn’t matter,” he said, his tone matter-of-fact rather than bitter. “It’s the buck.”

Favianna Rodriguez, another local activist-artist, said Black’s situation is far less rare than people outside the art world might think. “This is absolutely common,” she said, adding that she’s seen her own work, as well as that of people she knows, appropriated elsewhere many times. (Rodriguez knows of artists who’ve complained and even sued to defend their work, but it seems that more often than not, the artists, up against large corporations with lawyers on retainer, figure it’s not worth the hassle.) She’s a little less reserved than Black about the phenomenon: “Corporations are always looking to the counterculture — looking to artists — for their campaigns, and I think it’s disgusting. We’re speaking out against the very things these corporations are trying to market.”

After all, companies have long used populist and protest imagery — both original and not — in their advertising; Apple used likenesses of progressive heroes like Martin Luther King and Mahatma Gandhi in its Think Different ads, to this day one of the most famous advertising campaigns in history; the clothing company United Colors of Benetton, too, has long been known for ads that play on activist themes like environmentalism and the right to choose. A video ad from Levis’ recent “Go Forth” campaign, the debut of which was unfortunately timed at the apex of the England riots, included scenes of young people standing off against police, silhouetted against a cloud of what looks like tear gas.

In this case, especially, the irony runs thick: “Occupy is this whole ‘power to the people’ thing, and using that in relation to Las Vegas is …” — Black trailed off for a couple seconds — “interesting.” It’s also a testament to Occupy’s sex appeal. Think about it: A movement has to be pretty attractive to be co-opted by the very entities — big, national ad agencies; the kinds of people who use “branding agent” in daily conversation; one of the world’s most notorious conspicuous-consumption capitals — it’s railing against. And as Occupy has gone from fringe social movement to fact of American life, it makes sense that advertising agencies would want to cash in on the zeitgeist in any way possible. Earlier this year, the cosmetics company Maybelline drew ire for a series of ads that used Occupy tropes to shill lip balm; another ad, this one for a trading services agency, also made the rounds on the Internet recently as a result of its cheeky invitation to potential customers to “join the One Percent.” Dondero himself even acknowledged, somewhat obliquely, that the Vegas ad campaign was “a response to current events,” though he also noted that the image in question was but one part of a large and multipronged campaign. In fact, he said, the firm purposefully avoided doing anything more explicitly Occupy-themed: “It being Vegas, we thought that might present a real mixed message,” he said.

Facebook
Twitter
Linkedin
Previous articleCostco Fined $3.6 Million for Improper Handling of Hazardous Wastes in East Bay
Next articleMid-Week Menu: Picán Change, B No More, and the Return of Sushi Sho