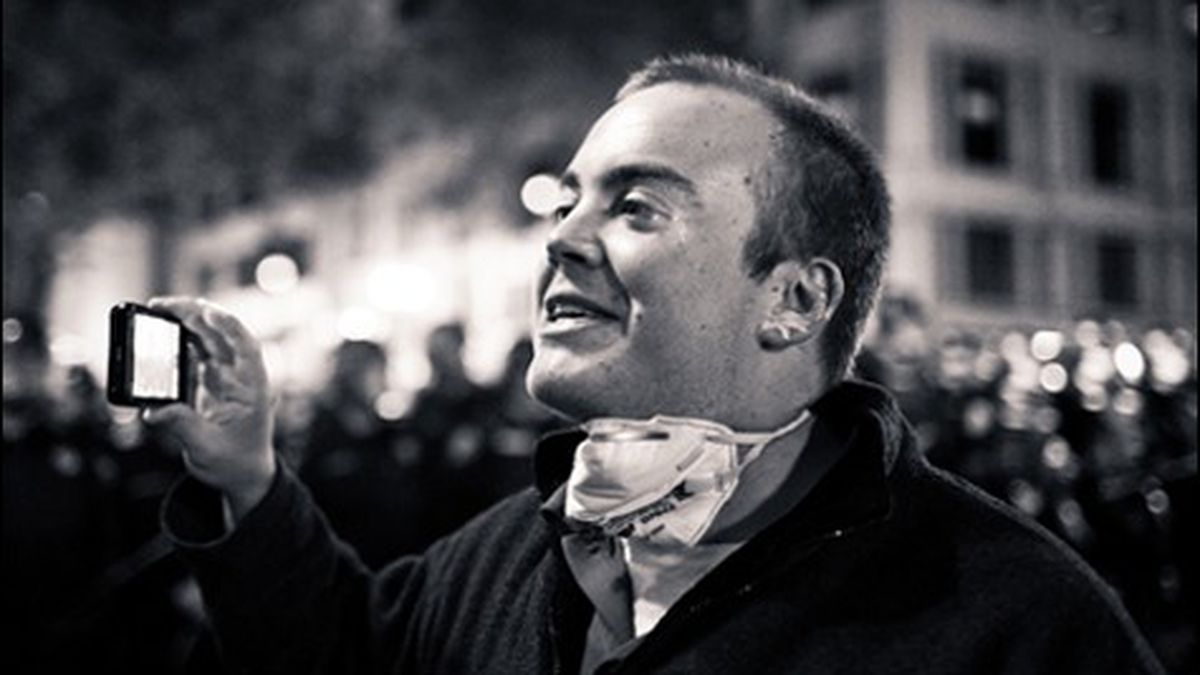 Live video feeds have been a critical part of Occupy — but now, some activists argue that they're a threat to the movement.

When Spencer Mills hooked his iPhone up to a livestreaming app and began documenting the events of the November 2 General Strike, he never could’ve expected what would happen: that the night would present a pivotal moment for Occupy Oakland; that after the end of the 11 o’clock news, he would be the only live source of information as to what was happening; that his livestream would later become a crucial resource for occupiers, media, and police alike; that he himself would soon become something of a folk hero among both occupiers and observers — or, that he would later be accused of undermining the movement merely by documenting it.

Mills, who may be better known by his Twitter handle, @OakFoSho, is but one of the hundreds of people nationwide who have been documenting local Occupy actions live on the web — and who are increasingly finding themselves caught in the middle of a growing dispute between those who argue that Occupy can’t exist without transparency, and those who argue that livestreamers put protesters at risk and threaten the movement at large by filming civil disobedience and property destruction. “There are people out there that really dislike what I do,” Mills said. “I’m very aware of that.”

In January, at a march near the original Occupy Wall Street encampment in lower Manhattan, Tim Pool, a well-known livestreamer who has been documenting the movement since its inception, was assaulted and threatened by a masked attacker; back in November, Pool was also confronted while filming a group of protesters taking the air out of police-cruiser tires. On January 28, the livestreamer known as Occupy Freedom LA had her camera stolen in Oakland in what may have been a targeted assault. And while Mills hasn’t been physically assaulted, he said some of his peers have received threats of physical violence, and that he has been accused on multiple occasions, in person and online, of “snitching.”

It’s an odd mantle to carry for someone who said he identifies with many of Occupy’s tenets, and who began livestreaming as a means of holding the police accountable and acting as antidote to what he saw as the mainstream media’s tendency toward spin. It’s also an ironic turn of events for a movement that was founded in part as a reaction to government and corporate secrecy — and which arguably would never have come to international attention without livestreamers.

“What livestreamers everywhere are doing is showing people who are geographically separate what the greater movement is looking like,” said Nick Baban, who streams, tweets, and blogs under the name Oaktown Pirate, and who regularly gets visitors to his site from places like Egypt, India, and Scotland. “It gives people the ability to see in real time what similarly minded people all over the world are doing — and that’s what makes this an international movement.”

But it’s a double-edged sword, and Occupy inhabits a terrain that no other major activist movement in history has had to contend with. “To be able to collect information from myriad different sources is a boon for the news consumer,” said Rebecca Jeschke, who works with issues at the intersection of technology, privacy, and freedom in her capacity as media relations director and digital rights analyst at the Electronic Frontier Foundation. “But the thing about livestreaming is, once you start, you can’t control who sees it.”

And even if, as livestreamer Jessica Hollie said, most of her peers don’t intend to catch citizens breaking the law, the problem with live, uncut video is, well, that it’s live and uncut. In other words, livestreamers capture what happens, exactly as it happens — and that has contentious implications for a movement that continues to wrestle with its relationship with violence and property destruction.

“Everybody wants footage of the cops being brutal — and we’re all in favor of that,” Baban said, speaking for himself and livestreaming partner Emily Breed, known online as Lexica. “But there’s an argument being made that we shouldn’t film protestor misbehavior, or that livestreamers are somehow doing the cops’ job for them.”

At last week’s Citizens’ Police Review Board meeting, Mills used livestream footage as evidence that the Oakland Police Department had violated procedure at several junctions over the last several months — but Brian Glasscock, who has been involved with Occupy Oakland for several months, said it’s not hard to imagine the city using the same footage to prosecute protesters down the line. “What people don’t realize about livestreamers is that their seemingly innocuous video might help the police bring a conspiracy charge or get someone convicted,” he said.

Livestreamers, like other journalists, typically operate under the principle that, in Mills’ words, “there’s no expectation of privacy in the public space,” and that they’re under no obligation to protect protesters’ identities. And that, Glasscock argued, is a problem. “They don’t always recognize when people don’t want to be filmed, and they should respect people’s requests not to be on camera,” he said. “I could understand someone getting aggressive with a livestreamer that was filming them against their will — they’re potentially putting their life on the line.”

But Breed argued that it’s a slippery slope: “If people know that we turn our camera off for certain situations or certain people, they’ll have no reason to trust anything else that we show.” In her and Baban’s mind, transparency is paramount: That’s why they coined the slogan and hashtag #sunshinebloc, a reference to the aphorism “sunlight is the best disinfectant,” and it’s why they’ve continued to film, tweet, and otherwise document Occupy Oakland actions even in the face of threats and criticism. “We believe that more cameras, more videos, more images is always a good thing, and that the national and international movement is very much served by transparency,” Baban said.

In that sense — and as livestreamers are continually faced with questions about whether they’re helping or hurting the movement — it’s clear that for the people doing it, documentation is a radical act. “People talk a lot of about diversity of tactics around here,” Mills said, gesturing toward Frank Ogawa Plaza. “Well, transparency is my tactic.”