The massive and wildly successful victory parade and rally last week showed why the Warriors belong in Oakland. 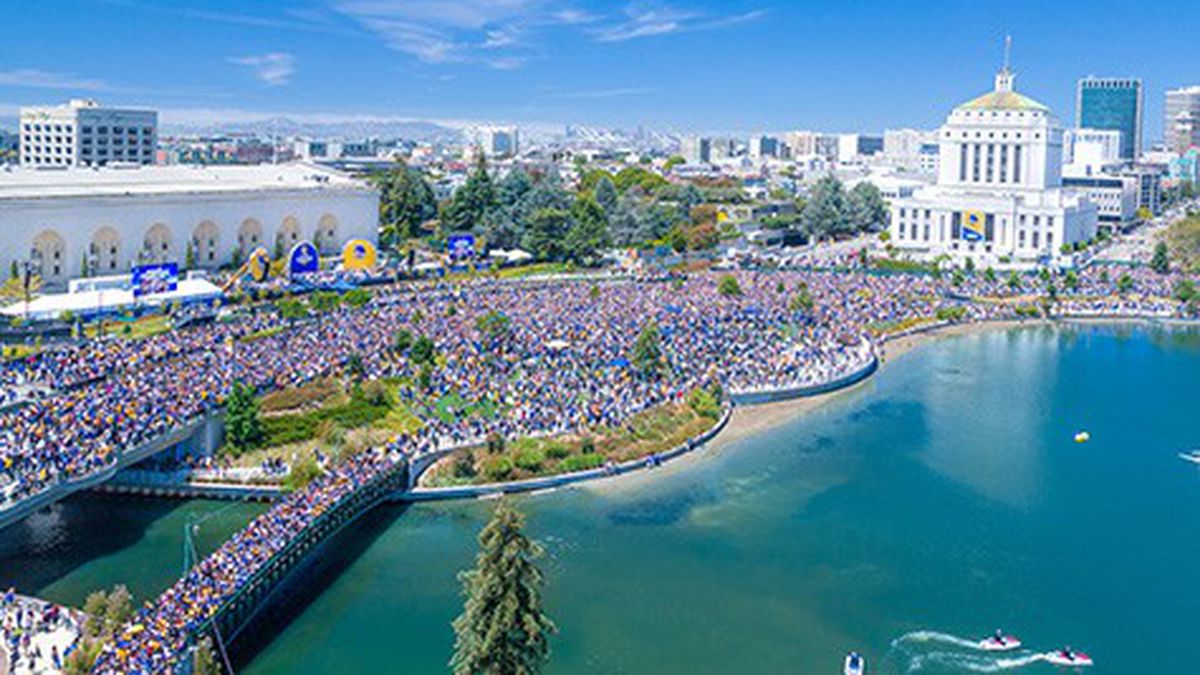 For more than three years, Joe Lacob and Peter Guber, co-owners of the Golden State Warriors, have made it clear that they want to move the team to San Francisco. Lacob and Guber even bought land last year on the San Francisco waterfront for their proposed new arena. The Warriors owners obviously hope to make a killing from the city’s tech boom, selling expensive luxury boxes and season tickets to San Francisco’s burgeoning class of tech-bro millionaires. But while the new arena plan might very well make Lacob and Guber a ton of money, it could also eventually backfire. That’s because the team risks losing its soul due to the fact that an expensive new arena will undoubtedly price out many members of the Warriors’ loyal, working-class fan base.

And that would be a big mistake — as last week’s wildly successful victory parade and rally in Oakland proved.

If you missed it, the event on Friday was absolutely fabulous. Hundreds of thousands of fans (Oakland police estimated that it was 1 million) crowded onto Oakland’s streets to get a glimpse of their beloved Warriors, who had won the NBA championship three days earlier. A massive throng stood along the shores of Lake Merritt to watch the victory rally in front of the Henry J. Kaiser Center. Oakland opened its arms to the Warriors — Children’s Fairyland even changed its name for the day to Rileyland in honor of the precocious two-year-old daughter of Warriors’ star player Stephen Curry.

“It was spectacular,” Oakland Councilmember Rebecca Kaplan said of the event and the diverse and vibrant crowd. “It was simply spectacular.”

It was spectacular. But Oakland’s love for the Warriors started long before last Friday. On Tuesday night last week, as the Warriors were closing out their series in Cleveland against the Cavaliers, fans paid $15 a ticket just to watch their team on a TV screen at Oracle Arena in Oakland. It sold out.

Sellouts are nothing new at the Oracle, either. The Warriors have been packing them in for as long as anyone can remember — even when the team was horrible during the late Nineties and early Aughts. If you’ve never been to a Warriors’ game, you’ve missed out on a quintessential East Bay/Oakland experience (much like A’s and Raiders games). The diverse, working-class, die-hard fans of the Warriors reflect Oakland itself: scrappy, vocal, and unendingly loyal.

But say goodbye to all of that if Lacob and Guber get their way. A shiny new arena in San Francisco promises to become nothing more than just another playground for the rich. People wealthy enough to afford tickets at the new facility are more likely to attend because of the scene than because of their love for basketball.

Just ask the San Francisco 49ers. Like Lacob and Guber, the owners of the 49ers — the York family — surely saw massive dollars signs when they decided to move the team to Santa Clara and build a state-of-the-art stadium there. But in their quest for profits, the Yorks left much of the 49er Faithful behind. Longtime season ticketholders simply couldn’t afford the new expensive seats in the South Bay. And so they were replaced by wealthy event-goers who seemed as if they had little interest in the actual game. Last year, it was commonplace to see large swaths of empty seats at 49ers stadium, because the team’s new breed of fan was content to watch the action from the high-priced bars and clubs inside the stadium. Niner home games are now among the most quiet in the NFL — at times they sound more like a tennis match than a football game.

“Rather than dedicated fans, you get people who buy tickets for other reasons,” Kaplan noted.

And that’s precisely what will happen if Lacob and Guber spend a fortune on a new arena in San Francisco. They’re wealthy men who accumulated their riches by maintaining a laser focus on profits, and so they’ll undoubtedly want to recoup their investment in San Francisco by charging exorbitant prices for Warriors games.

Hopefully, either the 49ers’ experience in Santa Clara or the massive victory parade and rally in Oakland last week will change their minds. If not, perhaps the best Oakland fans can hope for is that wealthy donors of UC San Francisco Medical Center who oppose Lacob and Guber’s proposal in the city (because they say it will harm UCSF) will be able to block the proposed arena.

If that were to happen, then Lacob and Guber would be smart to give Oakland another chance. And if they’re intent on having a new arena, building one in Oakland likely will be cheaper, too, because property prices are less expensive here. As such, a new arena in Oakland should also result in lower ticket prices than in San Francisco, enabling the team to maintain its fan base. That’s especially true if the Warriors choose to build on publicly owned land — whether at the current Coliseum site or on city land along the waterfront.

Oakland, after all, is where the real Warriors’ fans are.