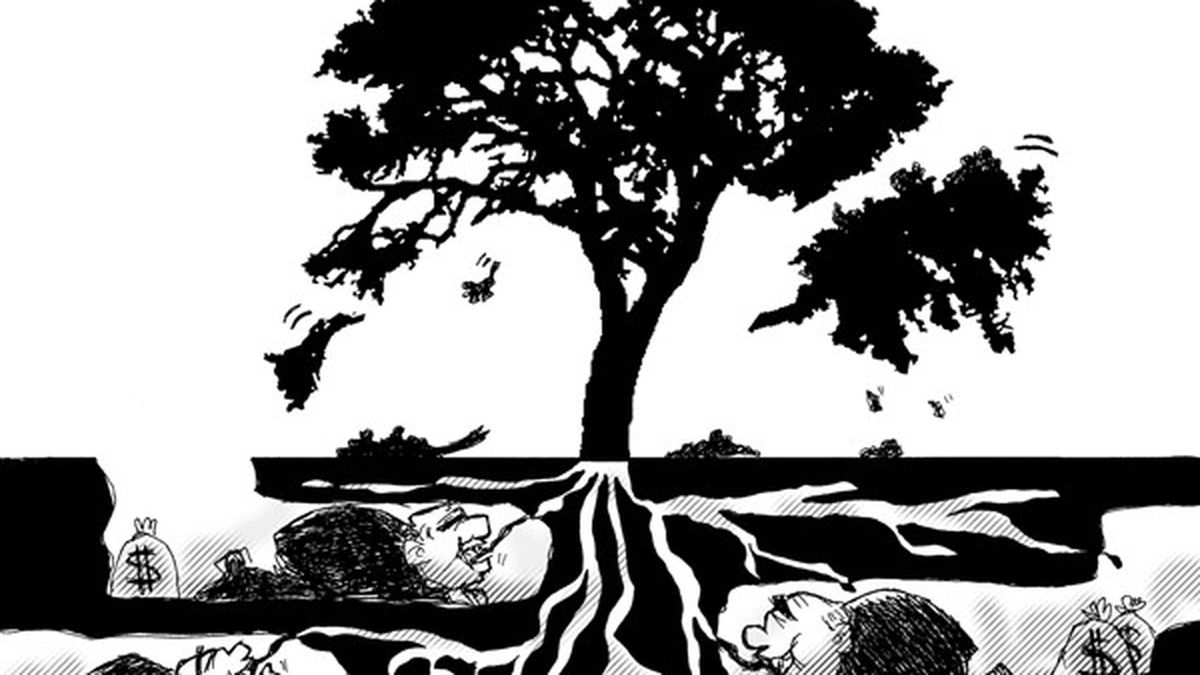 The city has already paid $26 million to Goldman Sachs, and local activists say the deal is unfair gift of public funds and should be terminated.

Although last week’s $26 billion settlement between the Obama administration, attorneys general from 49 states, and five large banks over unscrupulous lending practices appears to have been deeply flawed, it may provide a modicum of relief for two million homeowners nationwide, including a half-million Californians. The agreement, however, does nothing for cities like Oakland that are trapped in expensive and toxic financial deals with some of Wall Street’s biggest players. Oakland’s bad lending deal is with Goldman Sachs, and it’s already cost the city $26 million. By 2021, the total pricetag for local taxpayers could reach $46 million.

Oakland’s debt to Goldman Sachs has angered progressives in part because the Wall Street giant received multibillion-dollar bailouts from the federal government, and yet refuses to renegotiate expensive financial instruments with cities that are costing local taxpayers millions more. During a meeting last June on Oakland’s budget, Councilwoman Rebecca Kaplan fired off a letter to Goldman Sachs’ CEO: “Many of us stood united as leaders supporting federal action that used taxpayer funds to save your company from economic disaster,” Kaplan wrote to Lloyd Blankfein, whose pay topped $40 million in 2008. “These actions — to use taxpayer dollars in order to salvage private, for-profit corporations — was justified to the public on the grounds that it would enable companies such as yours to then be able to operate in a manner that would be beneficial to the public.

“Unfortunately,” she concluded, “that half of the deal has not taken place.”

Kaplan’s letter followed research by the Service Employees International Union and the Alliance of Californians for Community Empowerment that exposed the unfairness of so-called rate-swap agreements between cities and investment banks across California. Last June SEIU members picketed the California Street offices of Goldman Sachs in San Francisco, demanding renegotiation of the deal’s terms. “The $26 million the city has already paid is half of Oakland’s deficit this year,” activists said at the time, “but only 1 percent of Goldman Sachs’ profits for the first quarter of 2011.” But this campaign, as well as a resolution for the Oakland City Council to seek termination of the swap deal, later fell by the wayside.

The toxic rate-swap agreement in question dates to 1997 when Goldman Sachs convinced Oakland officials that it would protect taxpayers against the possibility that interest rates would rise on variable rate bonds that the city planned to issue the next year. Rate swaps — essentially contracts between two parties — allow governments to transform variable-rate debt payments into fixed-rate debt. Oakland’s deal with Goldman Sachs converted floating rates on $187 million of bond debt into a fixed 5.6 percent.

The problem for Oakland, however, was that floating interest rates only briefly exceeded 5.6 percent in the past fifteen years; first between 1998 and 2001, and again at the height of the housing bubble between 2006 and 2008. During the economic recession that followed 9/11, interest rates plummeted below 2 percent, forcing Oakland to make much higher payments to Goldman Sachs than it would have had it never signed the deal. Then, with the collapse of the economy in 2008, the US Federal Reserve reduced its lending rates to virtually zero, with variable rates in markets trailing close behind. Yet Oakland was still stuck paying more than 5 percent.

If rates stay artificially depressed due to the Federal Reserve’s decisions, Oakland will owe Goldman Sachs another $20 million between now and 2021. That’s on top of the $26 million the city has already paid.

Beyond labor and community groups, mainstream business publications also have pointed out how unfair these swap deals have become for cities since the crash in 2008. The Wall Street Journal reported on the subject two years ago, while reporters for Bloomberg News noted last month that US municipalities have paid more than $20 billion on rate swaps during the past five years.

Locally, pressure is now building again to do something about the Goldman Sachs deal. Leaders of some of Oakland’s largest churches are uniting with community organizers, Decolonize Oakland, and Occupy Oakland activists to focus on how “predatory” banks are draining Oakland’s budget and causing cuts to vital city services. They plan to bring the issue up with the city council on February 21, and say that many future actions are in the works.

Reverend Daniel Buford, head of the Prophetic Justice Ministry at Allen Temple Baptist Church in East Oakland, said the rate-swap deal with Goldman Sachs is an injustice. “Oakland should end its relationship with Goldman Sachs,” said Buford, “and Goldman Sachs should give back the money that’s been paid to them by our city.”

One challenge this coalition faces, however, is that the legal terms of the agreement will require Oakland to pay a hefty penalty — the “fair market value” of the swap — if the city unilaterally terminates the agreement before its expiration date in 2021. That penalty is around $16 million, according to Oakland’s most recent comprehensive annual financial report. “Goldman Sachs has gotten millions from Oakland each year from this swap. They’ve also gotten bailed out by taxpayers under the TARP program,” Buford said. “The swap should be terminated without penalty to the city.”

Members of Occupy the Hood and Decolonize Oakland, groups created to bring greater focus to racial justice issues within the larger Occupy movement, have researched Oakland’s swap agreement with Goldman Sachs. They say the city has strong moral and political justifications to demand cancellation without penalty. “It’s a second bailout for the big banks,” Yvonne Michelle of Decolonize Oakland said of the millions that investment banks are making off cities in the toxic rate-swap deals. “They were first bailed out by the administration when the market crashed. Now we’re in limbo with one foot in recovery and one foot in recession mode, and Goldman Sachs continues to prosper from our monies a second time over.”

Luz Calvo, a faculty member at Cal State University East Bay and a member of Decolonize Oakland, noted that policies by the Federal Reserve that keep interest rates low also allow Goldman Sachs to reap big profits from rate-swap deals made before interest rates collapsed. “Federal policy keeping interest rates at historically low levels is helping to transfer wealth out of municipalities to Wall Street,” Calvo explained. “The interest swap was set up so that if interest rates drop below a certain level, the city pays Goldman Sachs. If it goes above a certain level, Goldman Sachs pays the city.” The problem, concluded Calvo, is that “in normal times, the interest rate would fluctuate so that both sides would have good years and bad years. The Fed’s policy to hold interest rates at extremely low levels since 2008 is helping the financial sector extract more wealth out of municipalities that are involved in these swaps.”

Political leaders in Washington are forcing cities and taxpayers to suffer financially, Buford and other organizers also argued. Meanwhile the federal government is keeping rules in place that benefit corporations. It’s an onerous double standard that penalizes cities.

Under the Troubled Asset Relief Program of 2008, Goldman Sachs and other major financial corporations had their “troubled” derivatives (the class of financial products including rate swaps) relieved from them with billions in taxpayer dollars. Goldman Sachs alone got $10 billion under TARP, plus another $30 billion in interest-free money from the Federal Reserve under a secretive program called the Single Tranche Open Market Operation.

Able to unload many of its toxic derivatives with this public assistance, the bank reaped large profits during the financial crisis. In 2010, Goldman Sachs paid its top five executives approximately $70 million in salaries and stock awards, according to the firm’s most recent filings with the US Securities and Exchange Commission. Compensation is expected to have risen last year. In the same timeframe Oakland paid $5 million to Goldman Sachs because of the swap.

Goldman Sachs’ deal with Oakland is by no means the only toxic swap that’s bleeding Bay Area cities to the benefit of big banks. According to an SEIU study from February 2010, San Francisco must pay $19 million on swap deals with JP Morgan Chase, Goldman Sachs, and Bank of America, and the City of Richmond must hand over $6 million to the Royal Bank of Canada.

Other local agencies have been stung by swaps, too. The Peralta Community College District was forced to pay $1.6 million in 2011 on a swap with Morgan Stanley. “We find it unconscionable that while students, teachers, and staff go begging, Morgan Stanley — a recipient of $10 billion in federal bailout money — continues to collect millions from an impoverished community college district,” wrote Peralta Federation of Teachers President Matthew Goldstein in a letter sent to the executive director of Morgan Stanley’s San Francisco office. Goldstein’s faculty union and students took this message to the Peralta’s board of trustees last November. Peralta administrators have reportedly attempted to renegotiate the swap with Morgan Stanley. A spokesperson for Morgan Stanley declined to comment on the status of the swap agreement.

Last month San Francisco leaders successfully brought JP Morgan Chase to the table, convincing the bank to terminate a rate swap agreement that has been draining cash from the foundation that operates the Asian Art Museum. The swap was terminated without penalty.

Examples like this give hope to Oakland’s community organizers who are aiming to terminate the city’s swap with Goldman Sachs. These activists are also keen on pointing out that this is only the first step for them. “These rate swaps are only the tip of a larger iceberg,” said Jack Gerson of the Oakland Education Association. Gerson points to numerous other financial and tax and revenue arrangements that have Oakland paying off ballooning debts to banks and the state government.

Reverend Buford said now is the time for the Occupy movement to gain focus and ally itself with broader community organizations to push for fundamental changes affecting Oakland’s budget problems. “We have an opening, morally, socially, and politically, and we’ve got to seize it. All the banks and corporations are vulnerable now to public pressure.” Of the city council and other government bodies, Buford said, “Some leaders have wanted to do something about these financial injustices for a while now, but they lacked the power. We’re going to give them the strength and backing to do right.”