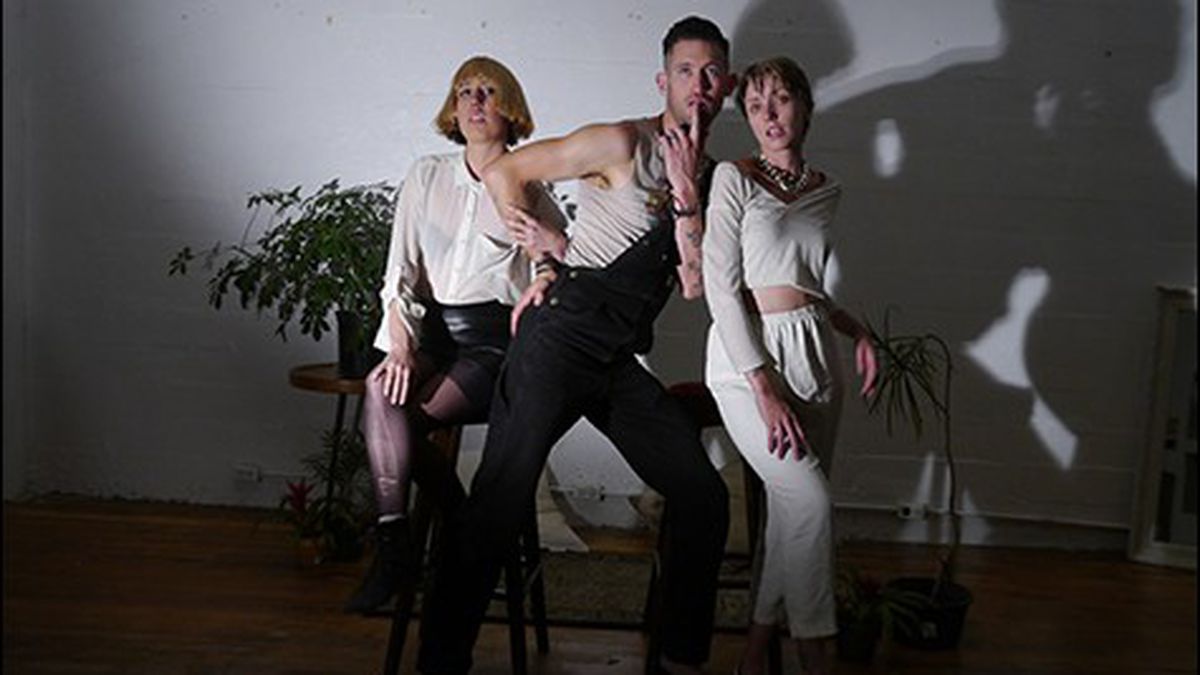 Fashion designer Jeremy Scott dressed models in hijabs and produced an Arab Spring-themed show. Designer brand Diesel launched an ad campaign featuring a topless white woman in a veil. Lady Gaga wore burqas. “The appropriation of the veil and Arabic language has been really problematic,” said Hawa Arsala, an Oakland-based Afghani-American photographer and writer, who goes by the artist name Hawa. “Hijabs have been trending.”

Hawa, 26, is exploring her identity as a Middle Eastern woman by turning the camera on herself as part of a monthlong, multimedia art installation at B4BEL4B (pronounced “babe lab”), a new experimental-art gallery and event space in Oakland’s Chinatown district.

“I feel like I’ve really distanced myself from my heritage and my community,” said Hawa, whose parents emigrated from Afghanistan in 1980. “I haven’t really felt that closeness to my identity,” she said, noting that the appropriation of Middle Eastern culture in fashion has only made it harder.

“This is sort of staking a claim,” Hawa said of her new project, which is called MAS#ALLAH — a play on an Arabic phrase of praise, gratitude, and protection. “I don’t want commodity fetishism to create these distances between me and my own heritage.”

Hawa’s project is the inaugural artist residency at B4BEL4B, which is dedicated to interactive shows. In this vein, MAS#ALLAH engages people both at the B4BEL4B studio and online as Hawa communicates and collaborates with Middle Eastern people locally and across the world.

At the B4BEL4B space, she is doing a self-portrait series, showcasing personal possessions and literature that relate to her identity, and hosting open studio hours where members of the public can visit and work on projects with her. At the same time, Hawa is also soliciting submissions from Middle Eastern artists and writers internationally — calling for diary entries, essays, photos, selfies, mixtapes, and other media. She is currently publishing the works on Tumblr (Mashallah-Project.Tumblr.com) and will mount selections as digital projections and physical prints throughout the B4BEL4B space at closing parties for her residency July 31 and Aug. 2.

In many ways, Hawa’s project encapsulates the mission of B4BEL4B, which opened in April, taking over both 3,000-square-foot floors of a two-story building at 184 10th Street. The site formerly housed a sex toy shop called Babeland, which inspired the artists behind the new space to initially name it “Babeland Gallery.” But in order to clearly distinguish the gallery from the existing business — which is part of a national chain — the group recently resettled on B4BEL4B, which they felt was a good fit for the experimental gallery, according to Tiare Ribeaux, curator, event coordinator, and one of three co-founders.

“A lot of galleries presently and in the past have a lot of hands-off art, where you hang things on the wall or put sculptures up, and it’s there to be viewed,” said Ribeaux, an Oakland-based artist with a background in dance, photography, and fashion. “We prefer for the artist to be present if possible or for the piece to be interacted with so that way the observer can … create something with the piece or be a part of it, which is just more fun.”

With Hawa’s residency, “the public can come have a conversation with her about what she is doing over the month,” Ribeaux said. And more broadly, when people enter B4BEL4B, “they’re not just the audience, they’re the participants,” she continued.

In its first two months, B4BEL4B has demonstrated that this is not some lofty, abstract mission. In its kickoff show, “Cognitive Dissonance,” a group of artists brought in interactive installations designed to stimulate all five senses — including a giant kaleidoscope sculpture that people could climb inside, as well as a glass skull filled with smoke. Another show, “Body Lobby,” mixed digital art and dance. On August 8, B4BEL4B will host a bondage-themed fashion installation by Oakland-based artist Ben Phelps-Rohrs, which will include live models posing as “living sculptures” — possibly kneeling in pools of water.

“It’s really powerful when you have multiple forms of art in one venue,” said Heather Holton, B4BEL4B co-founder and Oakland native.

And Ribeaux is not lacking in new interactive installation ideas. She said that later this year she hopes to do a scavenger hunt in the gallery that extends to the surrounding neighborhood. She also described a preliminary concept of putting on a show that’s digitally coordinated with another gallery on the opposite side of the continent; for example, pressing a button at B4BEL4B could trigger a response in another art gallery thousands of miles away.

In addition to the goal of showcasing interactive and experimental projects, B4BEL4B aims to feature works by people of color, queer artists, and other marginalized groups, said Ribeaux. “The idea is to offer the space to people who wouldn’t normally get a chance to exhibit their work.”

For her part, Hawa is using B4BEL4B as a platform to elevate the voices of Middle Eastern people around the world. “The media coverage of Middle Eastern folks and Arab folks and Islam as well has been tainted or skewed for a long time, and I think it’s through the arts that we’re starting to develop a voice more.”

Hawa said she is already working with people from the Middle East, the Netherlands, Australia, Canada, and elsewhere as part of MAS#ALLAH. She met most of her collaborators through Instagram and Twitter and through Browntourage, an online magazine she co-founded in 2011.

At a MAS#ALLAH event last week, Hawa and a small crowd of attendees sat in a circle and discussed the project. Hawa talked about growing up in a Muslim household, struggling with her identity in high school, returning to her father’s birthplace in Afghanistan — and how she hoped to explore all of this through the residency and through her art.

And in the spirit of B4BEL4B, she emphasized that the whole effort is very much an experiment: “It’s a place for things to sort of emerge,” she said. “We don’t know how it’s going to look at the end of the month.”

Did Four Cops Have to Die?