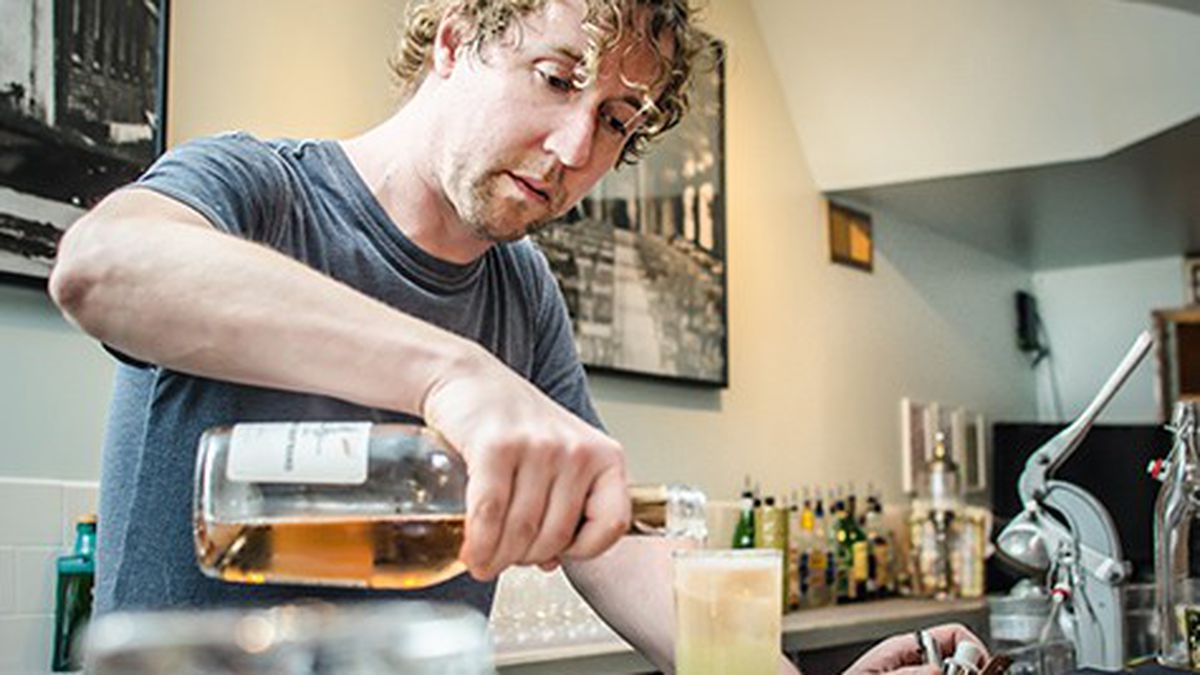 Once upon a time in Downtown Oakland, eager drinkers disembarking from the 12th Street BART station only had two logical options when it came to drinking destinations: Radio and Café Van Kleef. Fast-forward a few years, and suddenly Oakland has been lit up by fancy new bars that are packed to the brim on any given night with fresh-faced, eager drinkers.

The explosion of bars and nightlife has been a boon to Oakland. However, with this cultural shift comes a conspicuous change to the type of crowd that fills the city’s streets — and to the character of the bars themselves.

In some cases, established dive bars have been bought and turned into cocktail bars, as hopeful new entrepreneurs swap out dilapidated décor and big-brand booze for brighter, more open floor plans; an updated aesthetic; and back bars stocked with craft spirits and local beers to cater to Oakland’s ever-evolving new crowds.

Big Al’s Cactus Room, once a watering hole for Raiders players, became Bar 355, a cocktail bar with a velvety crooner-bar aesthetic and weekly oldies nights. Sweet Jimmie’s on Broadway was shut down and re-envisioned as The Night Light, a cocktail bar and rock venue. Kim’s Backyard, another Raider’s themed bar, was brightened up to make way for The Double Standard, a craft cocktail bar with a touch of saloon-style décor. Egbert Souse’s underwent a complete makeover when it became The Lodge, shedding its reputation as a rowdy hangout with Aspen ski-lodge aesthetics, taxidermy deer heads, grilled cheese sandwiches, and house cocktails. Go Sports Bar will reopen soon as Fort Green, a cocktail bar for discerning sports fans from the guys behind Drexl. And in Berkeley, Bec’s transformed into Tupper & Reed, a refined San Francisco- style lounge offering cocktails made with rarified ingredients and expensive booze.

The slew of recent changes comes at a time when gentrification is on everyone’s mind. When a long-standing, working-class dive bar turns into a completely different beast, old regulars start to wonder if they’ll still fit in among the new-to-town hipsters — especially when the beer-and-shot happy hour deals get replaced by $8 cocktails, and then $11 cocktails, and then $14 cocktails. When you walk into a bar like Tupper & Reed and ask for a shot of Hennessy, you might be met with a strange look and the bad news that “we don’t carry that here.” There’s not a TV in sight at former Raiders’ fan meccas. In this way, the shift in the bar scene is a logical extension of the anxiety surrounding cultural dilution and the displacement of locals.

In recent months, Ye Olde Hut reopened as The Rockridge Improvement Club (5515 College Ave., Oakland), or RIC for short. The RIC stands in a historical building that was originally built in 1910 as a community clubhouse called the Vernon Rockridge Improvement Club, whose goal was to help improve the neighborhood. During its Ye Olde Hut years, the bar became what new co-owner Scott Ayers described as “scary” and “super, super, super dive-y but with a lot of charm.” When Ayers and his business partners took over, structural changes were necessary throughout the bar in order to get everything up to code. With that came a cleaner aesthetic, and Ayers admits that former regulars were suspicious that tech bros had come in to fancy up the neighborhood. The staff has tried to dispel those fears by ingratiating themselves with returning regulars, and Ayers wants the bar to live up to its moniker by getting involved with the community and hosting fundraisers for local charities. While the RIC has expanded its offering of booze with an emphasis on cocktails, Ayers said his goal is to “make it more welcoming for way more different types of people.” But he admitted that the crowd has shifted a bit: “Hardcore dive-bar people are not interested in this place. Now it’s mostly young professionals.”

While aficionados of the dive bar culture might feel a pang of loss as they watch their favorite old gems become glittering new cocktail lounges, the reality of commerce remains the same: Sometimes owners just want to get out or retire, and sometimes empty bar stools are better filled when enthusiastic new owners with a dream of something brighter come along. New bar owners don’t necessarily set out to displace long-time patrons who have made a certain dive bar their home, but rather to cater to the influx of new Oakland residents who are looking to find a new bar to make their own.

Another spot that has experienced turnover is the bar formerly known as The Easy Lounge, which later became a picnic-themed cocktail lounge called The New Easy. Recently, former New Easy regulars Hortensia Mitura and Hana Hayashi reopened the bar as The Cat House (3255 Lakeshore Ave.), with a decked-out vintage apartment vibe. Marcus Turner is an Oakland native who has been a regular at the location since the Easy days in 2006. According to Turner, there weren’t many options for people who wanted to drink on a Friday or Saturday night back then. The Easy was a happening spot with DJs and a dance floor, but when The New Easy opened up, Turner saw that crowd dissipate to other downtown nightlife spots such as the Layover and Somar. Turner, however, stayed put.

“The New Easy introduced me to cocktail-style bars that I didn’t go to previously,” he said.

Turner has noticed that he’s now less likely to meet other Oakland natives at the bar, but said he is nevertheless excited to see what The Cat House will be like.

Gabe Santos, another dive-bar aficionado, is a former regular at Kim’s Backyard. When asked if he still goes to The Double Standard (2424 Telegraph Ave.), Santos admitted he had only been there a couple times, citing the change in atmosphere as one of the reasons.

“There are plenty of other places to go. We’ll always have our dive bars where we will feel welcome,” he noted, citing the Ruby Room, Radio, and Merchants as holdouts, with outliers such as Smitty’s, Geo Kaye’s, George & Walt’s, and The Parkway Lounge also holding it down. In other words, even as the number of down-to-earth dive bars dwindles in Oakland, drinkers who gravitate toward that kind of setting still have options. Ultimately, Santos said, “We just gotta accept that things change. It’s not a change for the worse.”

Santos did note that he goes out to bars less and less these days — though he said that has nothing to do with the changing scene.