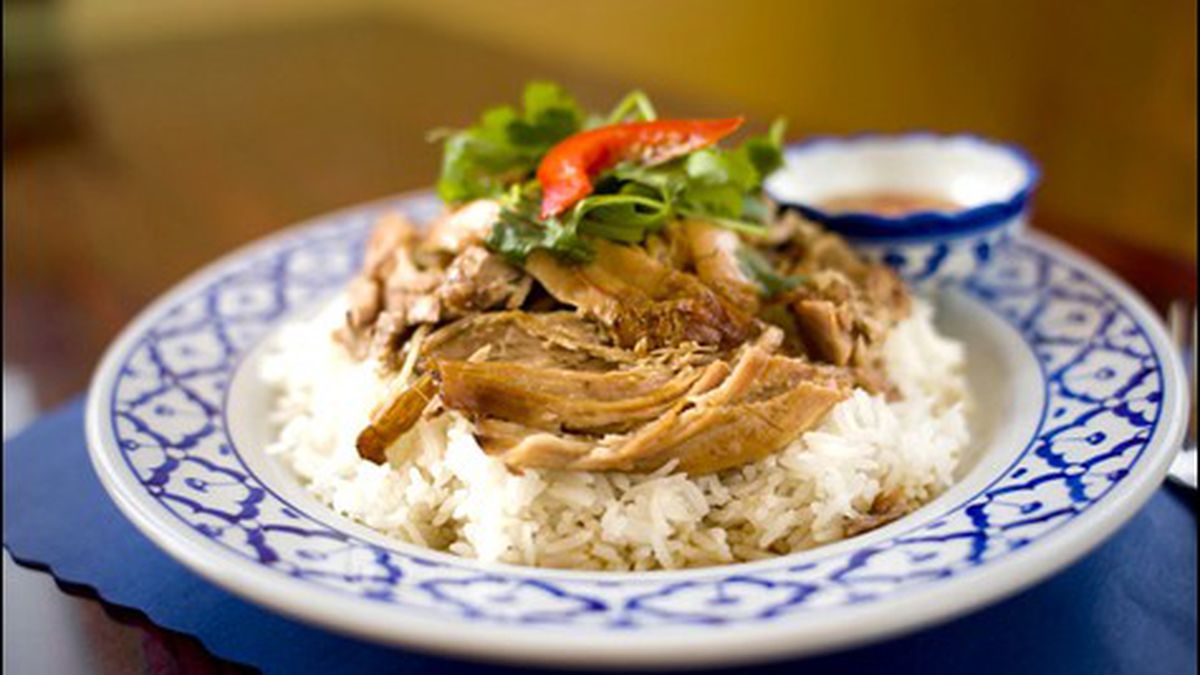 And that's a good thing.

New York writer Pitchaya Sudbanthad confessed last week that it’s taken him years to work up to even an ambivalent fondness for Thai restaurant cooking in America. “When I was younger,” he explained in “Learning to Love Thai-American Food” — an essay for the website Gilt Taste — “my grandmother would brave four lanes of Bangkok traffic chaos to buy duck noodle soup…. Such is the devotion that Thais have to what we eat.”

But the Thai restaurants that began appearing in LA in the 1980s? The ones fanning out to every town big enough to support a strip mall and a KFC? Those places watered down the curries, added sugar by the coffee mug where they should have used a teaspoon, and omitted key ingredients, things either unavailable here or too expensive to sink into cheap dishes. Sudbanthad’s tuk-tuk-dodging granny was sacrificed, in the public realm, for assimilation through cheeseburgers, spaghetti carbonara, and bibimbap — anything but the oily, sweet, and sticky little dish called pad Thai in all those Siam Gardens and Bangkok Cafes, with their glittery elephant tapestries and posters for Phuket.

Sudbanthad’s moment of reconciliation came years later, at a Thai restaurant in Manhattan. “I realized something,” he wrote. “I wasn’t in a sweltering open-air storefront on Sukhumvit Road, street dogs begging for scraps. My food wasn’t cooked by a family that has perfected and sold this one dish for generations. And that’s the mistake I made: I was chasing after a projected fantasy of great Thai food on American soil.”

It’s a little over three years now that Sangchai Vatanachai and Amnouy Manyvong left Thai House Express across the bay in the Tenderloin and set up on their own in Oakland, on the Southeast Asian strip of International Boulevard within lunch-run distance of Laney College. Since then, Chai Thai Noodle (or Noodles: the owners use both) has become popular. The Express crowned it the East Bay’s best Thai restaurant this year, but — I have to admit — I’d never been.

And there’s something else I have to admit: The sight of mostly non-Thais scattered at tables in the yellow-tiled dining room with its vista onto the parking lot of the Intertribal Friendship House (vibrating with drumbeats that night) made me skeptical. I braced myself for the pad Thai I sensed would come.

It never came. Not exactly, anyway.

Chai Thai Noodle’s menu is large, in Thai-American fashion. Most dishes have roots in Central Thailand, a few are northern — some of the best things I tried here, though, trace a connection to greater Bangkok.

That includes ka moo, stewed pork leg, which has to rate among the most satisfying meat dishes in all of East Oakland. The skinless version here, served over rice, is carnitas-like, big hunks of softly striated flesh that browned where the braising liquid doesn’t reach. It had the slightly numbing sweetness of five-spice and the molassesy sweetness of soy spiked with palm sugar, both of which you could find relief from in the accompanying hash of sour mustard greens and lime and chile sauce, rimmed with nam pla (Thai fish sauce) funk.

Kao nom tod — fried rice-ball salad — sets the GPS coordinates closer to Laos. You make it by rolling seasoned rice into lumps, deep-frying, then stir-frying the broken pieces. I’ve had crunchier versions — the one at That Luang in Richmond, for instance — but the one here is vivid with chile paste, nicely salty (you roll up spoonfuls in lettuce, with mint, cilantro, and toasted chiles), and tangy with pink, semi-translucent shreds of cured pork, a craggy, bright-tasting northern Thai take on fried rice.

Other dishes were just okay. Deep-fried Chiang Mai-style sausage (sai aou) had mild seasoning and texture just a few notches above crumbly. So-called pork jerky (moo kem), battered and deep-fried, was like bar food in the dull Bangkok beer dive of my jaundiced imagination, though a cold bottle of Beerlao — the dark one, all funk-laced fermented rice and bitter hops — made it tolerable.

If I’d guzzled enough to get hammered on, Cha Thai Noodle’s version of duck over rice (kao na ped pa-lo) would have been fantastic drunk food, fatty in the best way, with lush, dark bird flavor.

Tom kha, soured coconut soup with chicken, was classic American Thai: mild, sweet, and creamy, with lumps of inoffensive, soulless chicken breast sunk to the bottom. Then again, you pretty much know what you’ve signed on to when you order that. And the chicken larb is what critics like to call “accessible”: ground meat with no wonky bits (gizzards, cartilage), lime-tangy, and restrained in both chile heat and fish-sauce breath.

And while I can’t say I actually tried Chai Thai Nooodle’s pad Thai, its chan pad poo was just like I thought it would be, slippery noodles in a sweetish sauce tinted ketchup-red, with flecks of egg and Dungeness crab. Still, it wasn’t bad, and as much as I had a knee-jerk temptation to sneer and say it wasn’t real Thai, it was, however, real Thai-American.

That’s what’s good about Chai Thai Noodle: The bright-tasting dishes are generally well made and easy to like — inauthentic, perhaps, in Thai terms, but maybe that doesn’t matter. “Being inauthentic is a fact of America,” Pitchaya Sudbanthad points out. “To become American means to have been, at some point, uprooted from an ancestral world and reinvented free-style …. Now, when I look at a Thai restaurant menu, I don’t fume and think in expletives as much. I just breathe in and out, and let the food be what it can be.”

If Sudbanthad lived in the Bay Area, he might have been thinking about this very dining room, with its shiny kalaga tapestries, smiling servers, and fragrant pile of mild-tasting stewed pork leg over rice. What could be nicer?