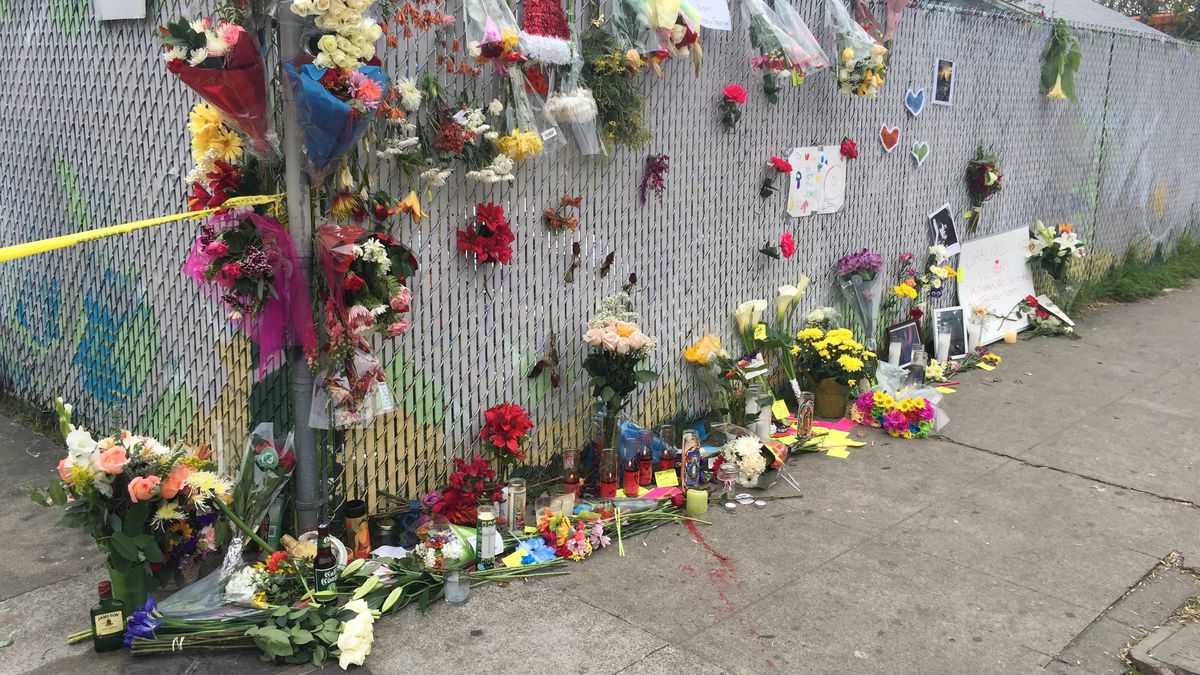 'They’re parlaying a terrible tragedy into a double tragedy.'

Angel is a well-known Oakland artists and musician, but he doesn’t want to give his last name for this story because, during the past two decades, he’s operated a live-work artist collective out of a warehouse in the city. And his longstanding home is now in the crosshairs after the Ghost Ship tragedy.

He says he’s placed an emphasis on safety inside his warehouse. There are sprinklers in every room, plus smoke alarms and exit signs. “It’s safer than any house that I’ve lived in in my entire life,” he told the Express.

But that hasn’t stopped the property-management group from scheduling a visit this week. Angel and his fellow tenants now fear they’ll become the next artists to be evicted on the heels of the 31st Avenue warehouse fire.

“They’re parlaying a terrible tragedy into a double tragedy, because artists and musicians who have responsible live-work spaces are getting evicted,” Angel said of the spree of evictions in the past two weeks. “Whole groups of people are losing their homes.”

He said he personally knows of “eight or nine” warehouses and underground spots that have undertaken inspections or been threatened with eviction just last week.

That’s why Angel and other Oaklanders are calling on City Hall to hit the pause-button on kicking out tenants, at least until leaders, landlords, and renters have better understanding of the policy and rules.

“They should stop evictions, and stop-red tagging, until they figure out what’s what, and stop the panicked reaction,” Angel argued.

Strauss has experienced firsthand how tragedy can lead to eviction. In March 2015, the building that housed his home and recording studio burnt down, resulting in the deaths of two tenants that lived at the live-work space above his abode. The Building and Planning Department red-tagged his entire building after the fire, even though he believes that the location was habitable. “I learned a lot about the bureaucracy and red tape that is completely mummifying the building department,” he said, describing their approach as “nuclear.”

Oakland actually approved a 90-day moratorium on evictions and rent hikes in April of this year, due to the housing crisis and rising rents. But it’s unclear whether this latest call-to-action from artists and housing-vulnerable residents will prompt City Hall to consider yet another eviction freeze.

Councilwoman Rebecca Kaplan told the Express that “people use the word moratorium as a short hand,” and that what is really needed is swift and smart action to provide vulnerable renters and worried landlords with legal options and policy clarity.

“I do think it’s really important the we do not allow this incident to be an excuse for wholesale mass evictions,” she said.

She and others said that, since Ghost Ship, there’s been confusion as to whether renter-protection laws apply to those living in non-permitted, a.k.a. “illegal,” spaces, like underground warehouses.

James Vann with the Oakland Tenants Unions explained that all Oakland tenants fall under the umbrella of the city’s renter protections, no matter where they live. “The rent-adjustment program, and the just-cause-eviction ordinance, both have no relations to zoning, building type, or building location,” Vann said. “The only requirement is that a tenant is renting.”

Jesse Townley, who sits on the Berkeley rent board, says that Berkeley city council and his fellow board members convened on Monday to discuss how to proceed after Ghost Ship. Their goals were to protect renters, and also to ensure safety, affordability, and creativity at underground spaces.

He also affirmed that all Berkeley renters have rights, no matter where they reside. “Even if a unit is not a legal residence under planning department, the rent-board ordinance assumes that any living situation is under rent control,” Townley explained.

His impression was that officials throughout the East Bay are “really feeling the heat” to work on solutions for vulnerable renters.

One course of action may lie on the other side of the country, in New York City. In 1982, NYC passed “Loft Laws,” which essentially legitimized artists live-work spaces and provided denizens of those spots with protections. These rules were expanded in 2010. Townley says he’s in touch with the authors of these laws to see what Berkeley and the Bay Area can learn and borrow.

Kaplan also said that she’s looking at the loft rules in NYC. “I’ve been reading that and been trying to see how we might be able to incorporate into our law what New York did,” she said. The councilwoman also said that she’s working with her colleague, Councilman Dan Kalb, and the City Attorney’s office to better understand legal options for renters in warehouses and other spaces.

Attorney James Cook, who works on housing-rights cases with the Law Offices of John Burris, says that he’ll be working closely on Ghost Ship related cases. “If you’re looking to get rid of people, or get higher rent on your space, this fire is like a gold mine,” he said.

Along with the Eviction Defense Collaborative, Cook and his colleagues hope to stop evictions after Ghost Ship, and help mediate discussions with landlords. He will be meeting with tenants this Friday at his law offices, and he says he’s invited City of Oakland officials to the gathering.

Leah Simon-Weisberg, an advocate with Tenants Together and also a member of the Berkeley rent board, hopes that governments will move quickly, so that renters have policy to comply with before more evictions occur. “We need to quickly distinguish between unsafe and illegally permitted,” she explained, noting the importance of this differentiation. “We should be in a situation where the priority is safety, and not just criminalizing.”

Artist and musician Angel reminded that the stakes are high. “There’s really a lot of amazing spaces that have been built intelligently and safely,” he said, “and they’re going to throw out what’s cool about Oakland, the arts and music culture.”