EDITOR’S NOTE: NEWCOMERS TO EASTBAYEXPRESS.COM, POLICE CHIEF ANTHONY BATTS RESIGNED MORE THAN TWO WEEKS AGO. PLEASE LOOK AT THE DATE OF THIS POST — IT’S FROM OCTOBER 11 OF THIS YEAR. BATTS’ RESIGNATION HAD NOTHING TO DO WITH THE DECISION THIS WEEK TO RAID THE OCCUPY OAKLAND ENCAMPMENT. IN ADDITION, INTERIM POLICE CHIEF HOWARD JORDAN, WHO TOOK OVER FOR BATTS TWO WEEKS AGO, HAS NOT RESIGNED.

WE UNDERSTAND THAT YOU LIKELY CAME TO THIS POST FROM A LINK ON TWITTER, FACEBOOK, OR SOME OTHER WEBSITE THAT ERRONEOUSLY CLAIMED THAT OAKLAND’S POLICE CHIEF HAD RESIGNED THIS WEEK IN RESPONSE TO THE OCCUPY OAKLAND RAID AND THAT THIS POST WAS PROOF OF THAT. BUT THOSE REFERRALS TO THIS SITE WERE WRONG. THIS IS AN OLD POST THAT HAD NOTHING TO DO WITH OCCUPY OAKLAND.

Chief Anthony Batts has resigned, according to an internal OPD memo obtained by Harry Harris at the Trib. Per the Trib‘s report, Batts’ e-mail attributed his resignation — which will become effective sometime next month — to mounting pressure and “limited control but full accountability” in his job:

“[When I was hired,] I answered the call for a reform-minded chief, a leader with a focus on community policing and high standards. I was told Oakland residents were looking for a strong visible leader to engage the community and reduce violent crime. My goal was to help rebuild a once proud, professional department geared toward crime reduction and community services….[Now,] rather than a chief managing a department of law enforcement professionals making the streets of Oakland safe, I found myself with limited control but full accountability…The landscape has changed radically over the past two years with new and different challenges.” 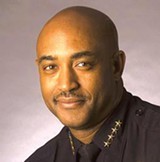 Batts, who came to Oakland in 2009 after a stint in Long Beach, was in the running for the San Jose Police Chief job earlier this year, though he was ultimately passed over in favor of acting San Jose police chief Chris Moore.

City Administrator Deanna Santana has confirmed Batts’ departure, though there’s no word yet on what the search for his replacement will look like, or who will run the department in the interim. We will, of course, keep you posted.

Update, 2:15: Here’s the full text of the e-mail Batts just sent to the media: