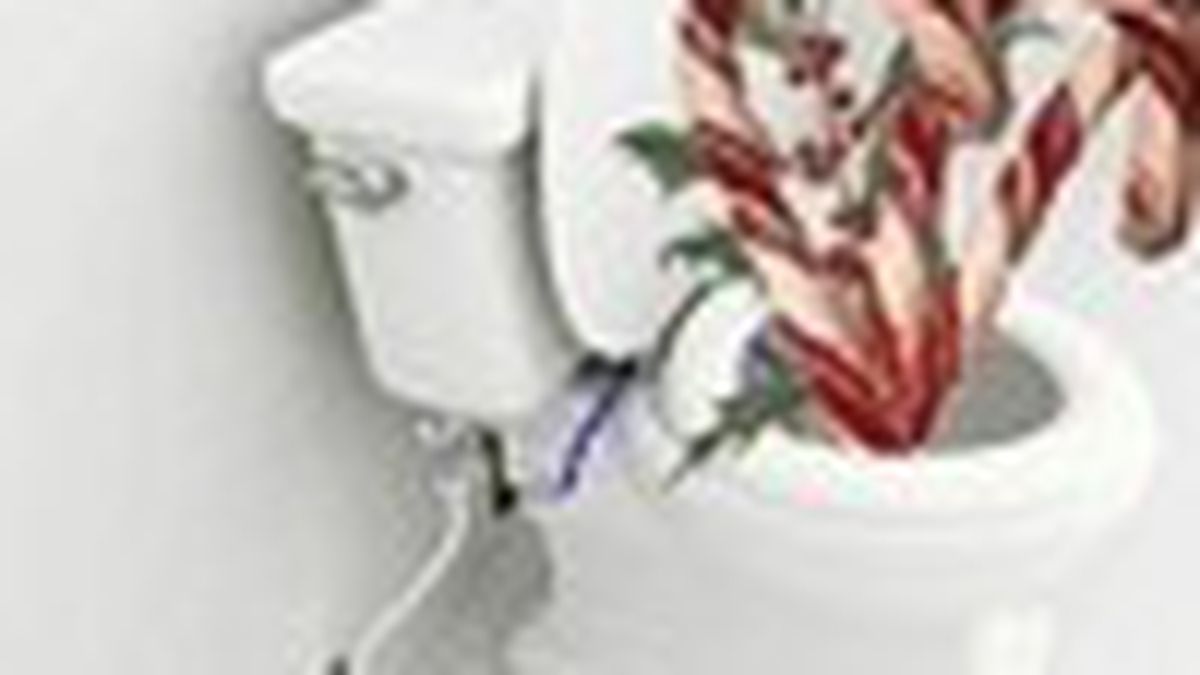 When you give clothing as gifts, you don’t wear it yourself first. You just think, He’ll like this! and take it off the rack and — done.

With books it’s pretty much the same. Skim the back cover, then into the shiny snowflake paper it goes. You picked it because its back cover called it a “wildly funny debut.” Because Matt Groening and Dave Eggers blurbed it. Because you’re in a huge holiday rush, and Oprah said to.

Which is why your sister-in-law is going to curl up soon with a cup of cocoa and her new gift and read: “I vomit. The vomit is full of bile and brown shit. … It is full of blood. … I heave and it comes, the burning vomit comes” — because you gave her an Oprah pick that reached #1 on Amazon, James Frey’s A Million Little Pieces (Anchor, $14.95). Your mom’s new boyfriend — she said he was funny, so you thought: Okay! Cartoons! — will be wading through the travails of a bald guy and his teddy bear as they yak about feces. “There is now a substantial helping of corn-encrusted butt-logs on your bed,” the toy tells his master in Neil Swaab’s Rehabilitating Mr. Wiggles (NBM, $10.95).

Based on buzz and the New York Times Book Review, you wind up with a novel about sewage, a cult fave featuring intestinal prolapse, and a book about bullshit. Not literal bullshit — like, fertilizer — but still.

The waves of nausea, the effluent tang, that permeate popular culture right now are turning entertainment into initiation rites, from Team America‘s projectile vomiting to White Chicks‘ fecal acoustics to the retch-and-spatter of Irvine Welsh’s whole oeuvre. Humor is potty humor. The spectral narrator of Amy Tan’s new novel Saving Fish from Drowning (Putnam, $26.95) is preoccupied with anal hygiene and dysentery. And have you noticed how many new TV ads and music videos employ sickening camerawork and effects: faces exploding, cars veering off cliffs? Come holiday time, this means trouble. You want to give what’s cool. In the store, the new-arrivals shelf is stocked with Jeff Vogel’s The Poo Bomb (Andrews McMeel, $14.95), Steve Bryant’s The Art of the Fart (PRC, $6.95), Brandy Lynn McDevitt’s Diarrhea (PublishAmerica, $24.95) — it’s a memoir! — and William Kotzwinkle’s Walter the Farting Dog Farts Again (Puffin, $13.50).

Those titles tell no lies. Nor does The Great Stink (Harcourt, $25), Clare Clark’s novel set in Victorian London’s sewers. But most titles give no clues because most books aren’t chiefly about effluent. Periel Aschenbrand’s The Only Bush I Trust Is My Own (Tarcher/Penguin, $9.95) — that’s the “wildly funny debut” — is billed as hip agitprop that skewers sweatshops and the president as it purportedly “reveals how to best inspire the youth of America.” But dude! Nearly thirty of its 197 pages are devoted to the author’s rectum (“I am not embarrassed that I have an anus, and I am quite pleased with mine”) and other rectums and what comes out of them. Aschenbrand writes of a lonely guy wanting “a group of guys [to] come over and strap a funnel to his face,” then poop into it. She describes telling her middle-aged parents about a friend who “defecated in [a] guy’s mouth and the guy ate it.” Her mother calls it shocking. Aschenbrand retorts that it’s interesting. She muses that if we ditched our taboos, maybe “human beings wouldn’t be committing the most fucking dastardly acts against one another.” At a Manhattan bookstore, she requests History of Shit (MIT, $15), Dominique Laporte’s Foucaultian-Freudian-Marxian study of excreta. The clerk says all copies have been returned to the publisher for lack of sales. Aschenbrand fumes that “people are fucking brainwashed to think that it’s more important to be obsessed with carbs than to be interested in something that their own bodies produce.” It’s because “we hate our fucking bodies.” She asks if the clerk has “any other books on shit. ” He doesn’t. She reviles another customer’s bad breath, then flashes back to “the day my bathtub filled up with shit,” lampooning her Japanese landlady’s accent as the latter produces a jug of “this velly expensive chemical, velly strong.” We meet the author’s friend who fainted on a date and awoke “lying in a pile of diarrhea. A cyst had burst on her ovary and she had shit her pants.” Then Aschenbrand recounts having injured a hemorrhoid during anal sex. It inflates hugely, so “Dr. Horowitz … a sexually aroused Orthodox Jew” inserts a finger, and … well.

And by the way, vote Democrat.

Groening, Eggers, and Conan O’Brien endorse Eisner Award-winning cartoonist Tony Millionaire, whose work Andy Dick calls “darkly luscious.” In this year’s Der Struwwelmaakies (Fantagraphics, $19.95), Millionaire draws a sock monkey telling an alcoholic crow: “I put my finger way up my ass, scratched some tissue off … it was cancer all right, it was slimy and stunk like shit.” The crow replies that he should have used a twisty straw. French-kissing lovers puke into each other’s mouths. And in a weird echo of Aschenbrand, a Chinese acupuncturist says L instead of R: “Dlink lum belly dangelous.”

Fan Tan ($23.95), a pirate novel begun by Marlon Brando but mainly written by Donald Cammell, who directed the Mick Jagger movie Performance but killed himself before finishing this book, was finally completed by David Thomson and released by Knopf this September. Times reviewer Joe Queenan calls it the perfect gift for a teenage boy — except for “a few ribald scenes” such as “one where the heroine has defecated on the hero’s chest.” Shit does indeed happen.

Is some vast conspiracy afoot to gross us out? Is it part of the anti-love/anti-beauty movement — the anti-aesthetic — spawned by angry academic malcontents? Or were we gross already, wallowing in a puke-poop zeitgeist? When, in his new novel Haunted (Doubleday, $4.95), Chuck Palahniuk describes a boy jerking off over a swimming-pool suction device and having to chew through his own intestine to keep from drowning, is he just helpfully holding up a mirror?

The yuckiness transcends mere scatology. It’s an ambient unease. It arises from those insidious fake-truth-is-funny books, such as Tom D’Antoni’s Rabid Nun Infects Entire Convent (Villard, $13.95) and John Hodgman’s The Areas of My Expertise (Dutton, $22), whose made-up trivia and tabloid news make you mistrust everything. It arises from weird formats where you can’t find the front of the book, and from the puzzlingly prevalent “ragged right,” where the right-hand edges of a book’s pages are cut rough, making them hard to turn. Robert Fisk’s The Great War for Civilisation (Knopf, $40) is a full eleven hundred pages of doom-saying finger-discomfort.

It’s going to take a lot of eggnog to wash away this season’s revulsions.