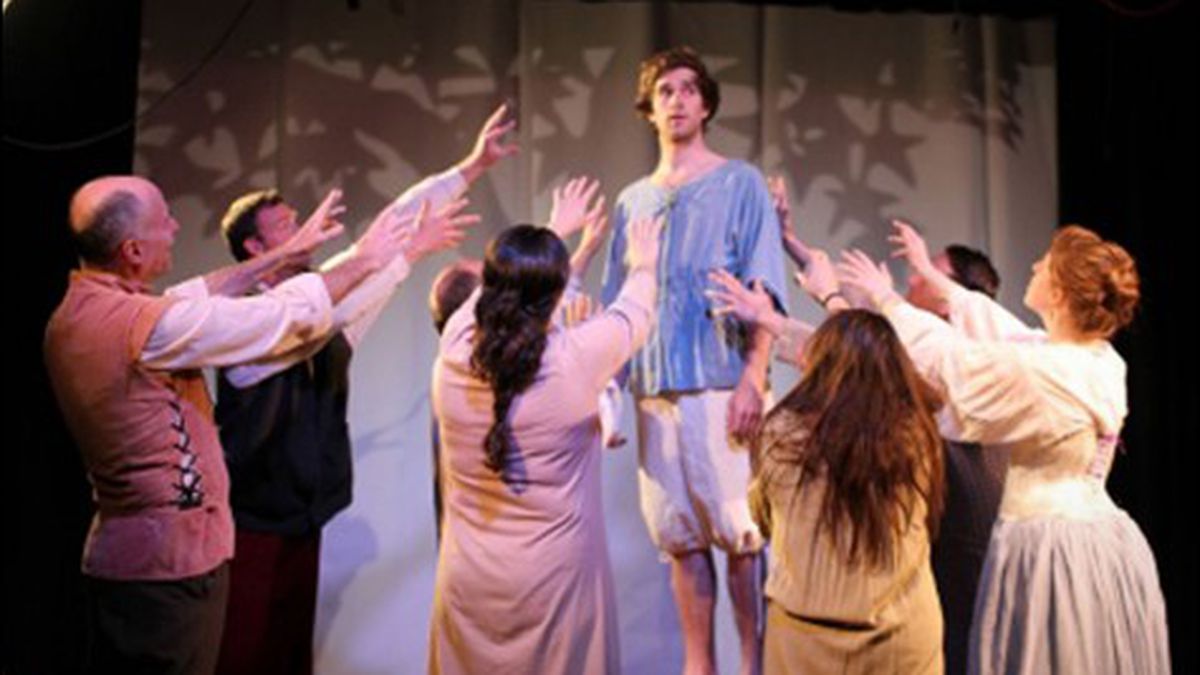 No Escaping This Passion Play

I tried, unsuccessfully, to leave Passion Play after Act I. Yes, I’m a sneaky bastard for doing it, but hear me out: Faced with three hours and thirty-two minutes (including intermission) of a community acting group reinterpreting Sarah Ruhl‘s concept version of the Passion of Christ, what would you have done? Like, really.

But I didn’t make my getaway, because one of the directors from Actors Ensemble of Berkeley followed me to my car. There was no escaping this Passion.

The members of Actors Ensemble produce and promote their plays through sheer tenacity, which, in a sense, makes them a lot like the characters of Ruhl’s Passion cycle. It’s a play about the making of a play — actually the most famous play in Western canonical literature: the trial and crucifixion of Jesus Christ. Ruhl wrote three iterations — the first takes place in 16th-century England, around the time Queen Elizabeth clamped down on Passion plays as a way to control religious iconography; the second in Nazi Germany; the third in Spearfish, South Dakota, during the Vietnam War. Ruhl’s whole point, as she stated in the playwright’s note, was to explore that vast gulf that exists “between authentic identity and performance.”

Easier said than done, said Stanley Spenger, who presides over the Actors Ensemble board of directors. He pitched the play to his cohorts last May, and met skepticism. “The real concern that the board had was that people would mistake what Passion Play was,” Spenger said later. “That they would think it was something like Mel Gibson’s The Passion of [the] Christ.” In fact, some people did misconstrue the company’s intent. “On Brown Paper and Goldstar we got a couple customer reviews asking why there wasn’t more Jesus in the play,” he said, referring to two ticketing sites.

Staff objections weren’t the only obstacle to getting Passion Play off the ground. The original director, Jeremy Cole, had to bow out late in the production process, said Spenger, leaving some question as to whether or not the play would still happen. In the end, Actors Ensemble recruited Jon Wai-keung Lowe to helm the production. It was an interesting choice. Lowe, who Spenger describes as more of a “visual and special effects guy,” incorporated shadow puppetry into the set design. Thus he created a multiplicity of locations — forests, ocean floors, home interiors, insides of factories, and a railway to Aushwitz — within a strikingly ascetic template. By using two different light sources, he and a team of graphic artists (Norman De Veyra, Paul Feinberg, Christine U’Ren, and Daniel Thobias Thanh Tran) figured out how to dissolve from one scene to the next. Lowe’s graphics made the play look elegant and comprehensive, even if it was clearly done with a paucity of resources.

As a result, the script, concept, and scenic design of this Passion Play far outpaced the acting, which was decidedly unpassionate. Let’s put it this way: An extremely violent homosexual make-out scene in the middle of Act II — between a German foot soldier and a guy playing Jesus, no less — elicited zero reaction from the audience. Same went for the tragic demise of Mary in Act I (Addie Ulrey), who realized, too late, the consequences of messing with a fish gutter (Jacob Cribbs). Even the lesbian romance between “Mary 1” and “Mary 2” (Ulrey and Elena Ruggiero, who play the proverbial “virgin” and “whore” in Act I) gets short shrift in this production.

That said, it’s still a beautiful concept. By hewing to Ruhl’s stage directions, Lowe made the three acts highly symmetrical. Time marches on, but the Passion remains largely unchanged. Again and again, the same troupe of actors marches out with the same rickety wooden cross — two planks nailed together, one of which has to be moved to a 3 o’clock position. The same actors play the same roles, even if they shift over time. Norman Macleod is a friar in Act 1, a journalist in Act II, and a VA psychiatrist in Act III, but whatever the case, his job is always to hear the other characters’ confessions. Lisa Wang delivers eerily similar monologues as Queen Elizabeth, Hitler, and President Reagan.

Winking literalness is a hallmark of Sarah Ruhl — what other playwright would call for a red sky more than a dozen times in her script? Such things become all the more obvious when the acting lacks subtlety. There’s no way to walk out of this production and not feel like you’ve been bludgeoned with messages about the limitations of religion and the ways it reflects, informs, and glosses over real life.

Clearly, the best part of this production is the story behind it. It’s not just a rendition of Sarah Ruhl’s Passion Play. It’s an actual passion play — a work of hokey religious idolatry by a Ruhl acolyte (Spenger), who defied the naysayers in order to get his message out there. I was one of those naysayers, and I got spurned. And in retrospect, I’m grateful for that.

Food Coverage From Beyond the Bubble: Laurel Miller Responds