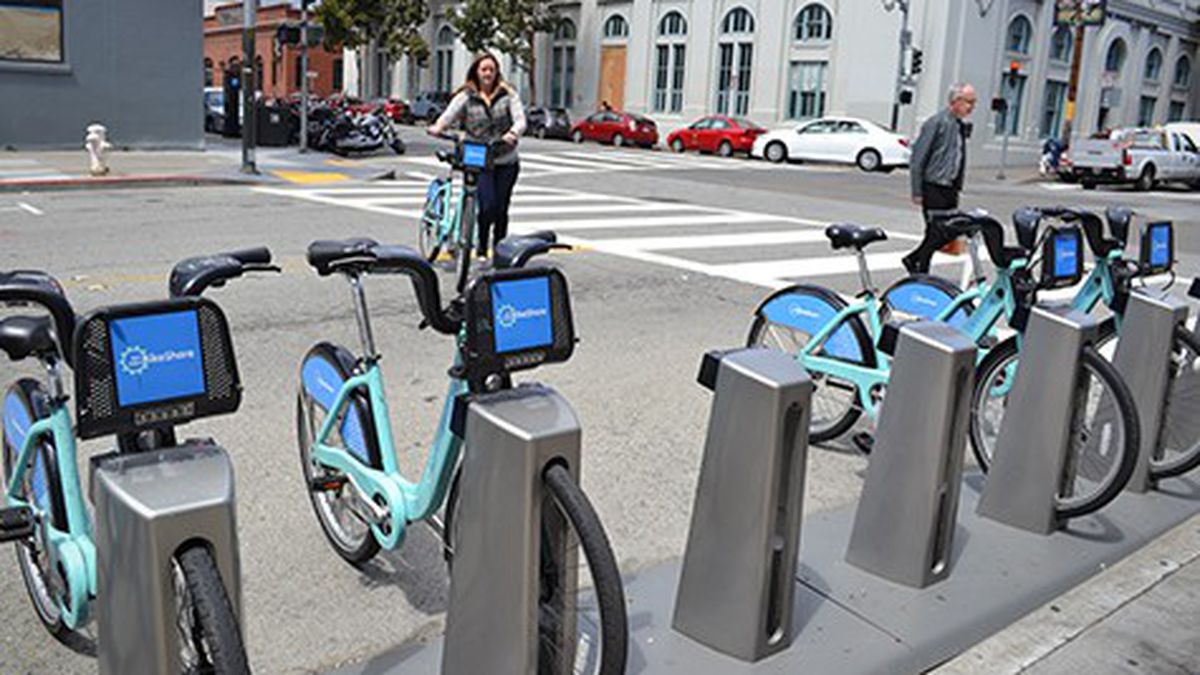 Bay Area Bike Share is rolling out plans to get East Bay residents out of cars and onto bikes as early as this fall, but the program might not be accessible to many low-income residents.

The Metropolitan Transportation Commission (MTC) announced last May that Bay Area Bike Share would expand across five Bay Area cities, bringing 1,400 bikes to Oakland, Berkeley, and Emeryville by 2017. More recently, several components of the East Bay’s bike share program have been debated in a series of ongoing public workshops, including where to install bike stations. But perhaps the biggest question facing the program is how to make bike sharing equitable.

Under the current plan, the price of an annual membership would be $88, but could rise to $149 by the time the program kicks off this fall, thereby making the East Bay home to one of the most expensive bike share systems in the nation. Bay Area Bike Share Outreach and Communications manager Paolo Cosulich-Schwartz said the potential price hike stems from the fact that the program is transitioning from public to private financing. The higher rates would pay for operations and maintaining bikes and stations and would help fund a revenue-sharing program with MTC. “The San Francisco-San Jose pilot program had been operating under a heavily subsidized system,” Cosulich-Schwartz said.

The private-public partnership with Motivate, the largest bike share operator in the country, will include a discounted membership — $60 annually — for low-income users. But some bike activists note that the MTC contract states that only those enrolled in PG&E’s California Alternate Rates for Energy (CARE) Program qualify for the reduced rate, leaving out a significant number of people who aren’t registered for utility services or are homeless.

On January 12, Oakland’s Bicyclist & Pedestrian Advisory Commission, which advises and recommends policies for safe pedestrian and bikeway systems, released a letter that the group had sent to the Oakland City Council’s Public Works committee in support of the new program, but with the potential finance barriers at the top of the list of items to consider as the plan moves forward. “The $149 annual membership fee ($60 low-income) will make it one of the most expensive Bikeshare systems in the country. In order to create a positive perception of the service, opportunities need to be sought to further reduce the cost to users, especially for low-income individuals,” the letter stated. “Overtime fees may more likely be accrued by users in lower-income neighborhoods on the edges of the service area, and we suggest addressing this issue within the low-income discount membership structure.”

Robert Prinz, a BPAC commissioner and Bike East Bay education director, said in an interview that he’s hopeful the bike share program can be beneficial both to Motivate and to riders, but said there is still plenty of work to do in terms of making bike share more equitable. “There’s a lot of holes in that plan we need to address,” he said.

Prinz said he sees the shift to private funding as both a good and bad opportunity. On the one hand, there are going to be a lot more bikes on the road. But groups like BPAC and Bike East Bay now have less influence over the system, including determining subsidized programs and equitable-access plans. “Higher density and a large number of bikes is great,” he said. “But it’s not just about the number of bikes, it’s also about where they are so people have convenient places to ride.”

City bike share programs across the nation have garnered positive reviews for safety and for clearing up traffic, encouraging physical activity, and reducing carbon emissions. But they’ve also struggled to make transportation more accessible to those with low or zero income.

A study conducted by the Mineta Transportation Institute (MTI) in 2012 found that income distribution of bike sharing members skews toward a higher-income level relative to the population for each of the cities surveyed. It also showed that individuals with higher levels of education were more likely to use the bike share system; in both Salt Lake City and Minneapolis-St. Paul (counted as one city in the analysis), the study found that more than 80 percent of bike share members had a bachelor’s degree or higher.

Susan Shaheen, an adjunct professor and co-director of the Institute of Transportation Studies’ Transportation Sustainability Research Center at UC Berkeley who was the lead researcher in the 2012 and 2014 MTI bike sharing studies, said in an interview that pricing is an important part of bike share programs. At the time of Shaheen’s study, the median price for an annual membership in bike share programs nationwide was about $65. Shaheen said the number has likely gone up in recent years, and noted that Citi Bike in New York raised its annual membership prices from $95 to $149 in 2014.

Shaheen said an annual price of $149 makes sense if a portion of the funds help subsidize low-income riders. However, she points out that price isn’t the only barrier for accessing bike share programs. Some people who don’t live close to a bike share station, or “doc zone,” get penalized with overage charges because of the time it takes to return a bike. In addition, the program requires users to have a credit card to purchase a membership. “Are these bikes available to lower-income [people] geographically and financially? Are these individuals banked or unbanked?” she asked. “There are questions relating to equity that don’t even have to do with the price.”

Shaheen said Bay Area bike share planners should analyze the best practices of other cities. One example is Pronto Cycle Share in Seattle, another Motivate-operated system, which teamed up with affordable housing providers to offer discounted annual rates as low as $20 per year.

There’s also Hubway, a Motivate-operated city bike share program owned by the cities of Boston, Cambridge, Brookline, and Somerville in Massachusetts. Rather than having Motivate administer low-income passes, the City of Boston offers eligible residents annual memberships of just $5 — along with a free helmet and additional thirty-minute usage period, in case they live a long distance from a doc zone. Eligibility is determined by a member’s income level. The City of Boston also hosts a “Prescribe-A-Bike” system setup with local physicians who can refer low-income patients for a $5 Hubway annual membership. Currently, subsidized members make up about 15 percent of the Hubway’s 13,000 members.

Cosulich-Schwartz emphasized that Bay Area Bike Share is still working out the details, and that initiatives to improve accessibility may eventually arise. For instance, he said that discounted rates that currently apply to residents enrolled in MUNI’s lifeline program could also be employed by its East Bay counterpart, and there’s even been talk of implementing retail storefronts where users could pay in cash. However, any plan to include people who aren’t signed up for utility services or don’t have credit cards has yet to be officially included in the deal.

Either way, Shaheen stressed that not all cities are the same, and thus not all pricing models will work the same. “In the absence of research and understanding, it’s hard to know if the user and operator sides are both achieving economic equity and environmental sustainability,” she said, making public participation at this stage ever more crucial.

“There’s still ongoing outreach for people who want to plan for this,” Prinz said. “We have such a good opportunity to get bike share right and make it equitable here in the Bay Area.”