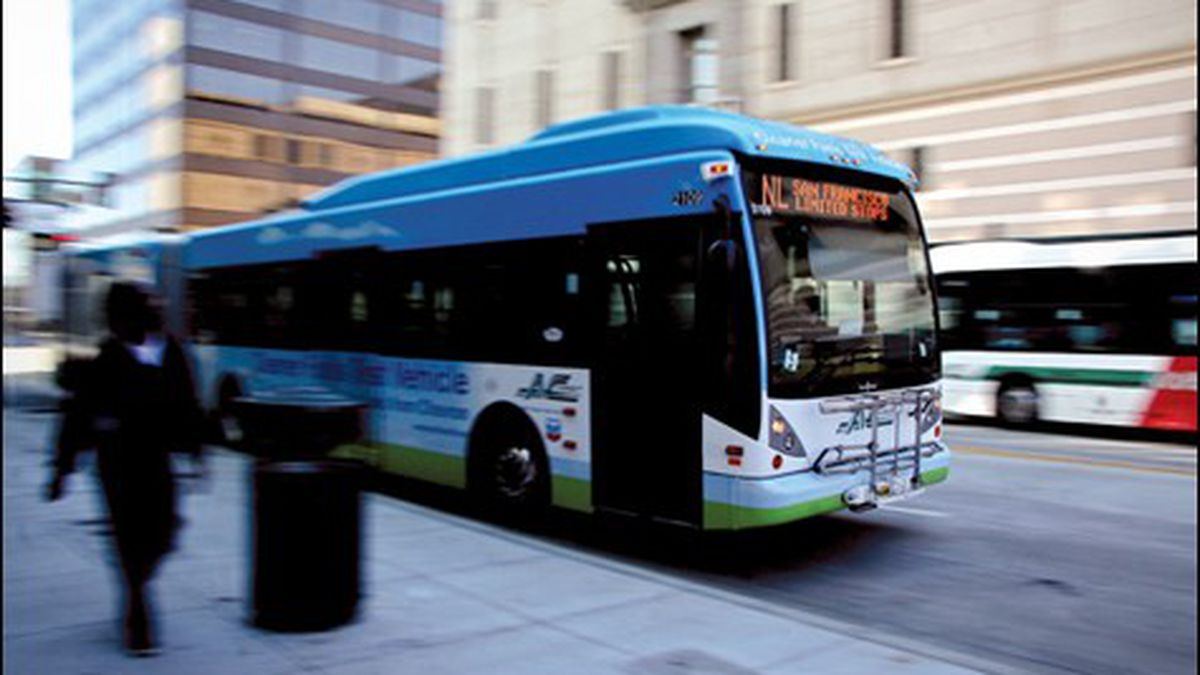 AC Transit Board member Chris Peeples was questioning a district staff member during a board meeting last week when General Manager David Armijo spoke up, asking, “If I may, may I respond?” When board president Elsa Ortiz nodded yes, Armijo gave a brief explanation of the district’s reasoning in proposing certain alternatives in proposed Bus Rapid Transit stations. Armijo then returned to his usual silent observation as the board continued its deliberations.

For anyone attending their first AC Transit board meeting, there was nothing remarkable or even memorable about the incident. But as much as anything else, the exchange showed the vast difference between Armijo, who came to AC Transit last February, and Rick Fernandez, who resigned from the district in October of 2009 under considerable board pressure after ten years running the district.

Before he fell out of favor with the board during a sustained fiscal crisis and mounting criticism over his controversial, self-described “partnership” with Belgian bus manufacturer Van Hool, Fernandez treated the AC Transit board as an annoying junior partner, interjecting himself into board deliberations, interrupting board members to give long lectures, often supplementing them with detailed facts and figures that he had never bothered to include in his written reports.

In the two-year interim between Fernandez’ resignation and Armijo’s hiring, AC Transit was run by interim General Manager Mary King while the board sought a permanent manager.

Relations during meetings with the AC Transit board are not the only easily visible difference between the Fernandez and Armijo managerial regimes. It is also the difference in attitude between the two men and the public.

When the Oakland City Council gave final consideration earlier this year to AC Transit’s Bus Rapid Transit (BRT) proposal, Armijo was there to present the district’s case to councilmembers. One longtime AC Transit board member said flatly this week that he could think of no instance when Fernandez ever appeared before an outside agency on behalf of the district.

Fernandez was also openly dismissive of criticism of AC Transit and his management decisions by members of the public, exemplified by his attitude toward retired Oakland architect Joyce Roy. Roy has been the district’s severest critic in recent years, speaking on multiple items at board meetings, frequently clashing with Fernandez, and was the person credited with first bringing the criticism of the Van Hool buses to the attention of the media and the public. Fernandez grew so contemptuous of Roy that, during the last year of his tenure, he would pointedly walk out of the room during board meetings when she got up to speak, returning only when she had finished.

Roy said that, in contrast, when she introduced herself to Armijo at the first board meeting after his hiring, he suggested sitting down with her and talking about her concerns about the district, and said the two have been meeting at least once a month in the six months since. Roy is as pleased with Armijo as she was displeased with Fernandez. “This manager is actually doing management,” she said.

AC Transit board President Elsa Ortiz shied away from requests to give her opinion of Fernandez’ tenure at AC Transit, but her feelings about the former manager should be obvious to anyone looking up the record of Fernandez’ last year. With Fernandez as the architect and chief champion of the self-described “partnership” that saw AC Transit buying buses exclusively from Belgian-based Van Hool, it was Ortiz’ sponsorship and promotion of a 2009 “Buy American” board policy, as much as anything else, that crystallized board opposition to Fernandez and led to his resignation.

Instead of criticizing Fernandez today, Ortiz offered praise and analysis of Armijo and his immediate predecessor, interim manager King. “We were a very unstable financial situation, we were really in deep trouble” when Fernandez resigned, Ortiz said in a recent interview. “We needed somebody to make tough financial decisions in order for us to survive, and Mary [King] did that. She came in and eliminated a lot of the perks and benefits that management had enjoyed,” including the free use of an AC Transit-owned automobile by management staff.

By reducing unnecessary management benefits first, Ortiz said, King was able to win needed union concessions from AC Transit drivers when their contract was renewed in November of 2010. “How could we operate a bloated agency and expect the union to give us concessions?” she asked.

“For the short time she was there,” Ortiz continued, “Mary finally provided stability.”

Ortiz was generous in her praise of Armijo, who she said has “tremendous experience in transit management,” which his resume on the AC Transit website lists as, among other things, chief executive for transit agencies in California, New Mexico, Texas, and Florida. “It appears that for many years we lacked accountability” in such areas as “setting up goals and evaluations. David has started that,” Ortiz said, noting that under Armijo, AC Transit has reduced by 50 percent the number of what she called “missed trips,” which she described as buses failing to go out on runs “for whatever reason,” including maintenance, repairs, or bad scheduling. She also said that Armijo has improved by 25 percent the amount of miles AC Transit buses travel between repair stops.

Ortiz described Armijo as “respectful, inclusive, and very transparent” in his relations with the board. “One thing he’s doing that is new: He’s bringing contracts and expenditures to the board for review. That’s unlike before, when those decisions were made by staff. Now the board is participating.” Ortiz concluded: “I’m very happy that we finally appear to be going in the right direction.”

Support from board leaders is going to be critical for Armijo for any extended career with AC Transit. Although he is being compared favorably with Fernandez’ tenure, Armijo had problems of his own in his last executive position. In April of 2011, he was fired as executive director of the Hillsborough Area Regional Transit district of Hillsborough County, Florida (Tampa) after being placed on month-long suspension because of employee complaints.

For his part, District Two board member Greg Harper (Emeryville, Piedmont, and portions of Oakland and Berkeley) said he is “pleased so far” with Armijo’s performance, and divides it into two areas: operational and general office management.

Operations are “improving quite a bit” under Armijo, Harper said, noting that the rate of AC Transit buses getting out on the street late from the bus yard has dropped 80 percent in the six months since the new director was hired. Harper also said the district’s on-time arrival performance and worker absenteeism have improved under Armijo, though not as dramatically. “We’re seeing some good early signs,” Harper said.

Harper said that Armijo also has “made quite a stir” among middle and upper management, bringing in new staff members, moving some existing staffers to different positions, and encouraging “some people in key management positions” that it might be best to relocate outside of AC Transit. Harper also said he’s seen a marked improvement in responsiveness to rider complaints under Armijo. “He gets into it right away, with good responses,” Harper said.

But Harper conceded it is going to “take some time” to come to a final evaluation of Armijo’s management.

At-Large board member Chris Peeples — who, with a fifteen-year tenure, is the longest-serving member of that board and its acknowledged policy wonk — is not yet ready to give even a preliminary opinion of Armijo.

“I’m still figuring David out,” said Peeples, who was the most ardent defender on the board of Fernandez’ Van Hool partnership. “David has a huge amount of experience in the transportation industry, thirty years. But unlike Rick [Fernandez], who sort of came up from the bottom and whose expertise was in a lot of technical stuff, David’s a management guy. He taught management at Cal State Long Beach and has a management degree in management.” As a result, Peeples said, Armijo has spent his first few months at AC Transit concentrating on “a huge amount of restructuring. I don’t know whether it’s going to work or not. I’m cautiously optimistic, but God is it different.”

Peeples said that King “cranked down on the people and on the general attitude, but really didn’t restructure anything. David has radically restructured things. We no longer have a planning department. It got split up. Part of it is under operations. Part of it is under capital projects. I don’t really know how it’s going to work out in the end, but if the board wanted things to change, they certainly got what they wanted.”

Peeples said the contract with the new director mandates a board review after a year. “Given the breadth of the changes he is implementing,” it is going to take a couple of years for the board to be able to fully evaluate Armijo’s progress, Peeples asserted.

But Peeples said that board evaluation is very different from how the general public is going to view the new director. “What the public is interested in is ‘can I get back and forth on the bus on time to where I want to go? How long do I have to wait on the street corner to do that?’ Obviously, the public has to understand that we can’t provide a bus every ten minutes on every line. But we in transportation need to understand the public’s concerns, and be able to provide them a bus when they need a bus.” Peeples said that, ultimately, those are the criteria by which the public will judge both AC Transit and its new general manager.