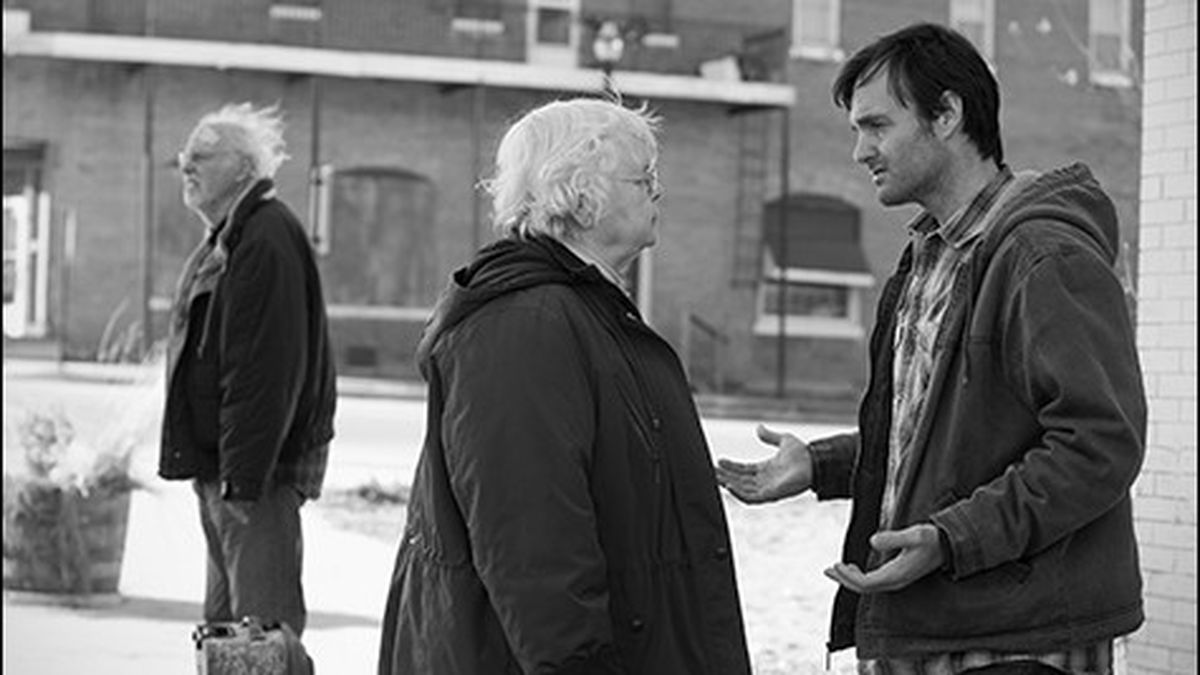 Scenes from the Empty Quarter.

Like the Coen brothers’ Fargo, Alexander Payne’s Nebraska teases us with a misdirection play before we even get into our seats. The story actually opens in Billings, Montana, and only wanders into the vicinity of Lincoln, Nebraska in its middle third, as cantankerous senior citizen Woody Grant (played by Bruce Dern) and his indulgent, increasingly bewildered son David (Will Forte) go out on the road in search of: a) a million dollars, or b) the elusive spirit of the American Heartland, take your pick.

Woody is one of those sour-faced old farts you’d find on any street, anywhere in the world, muttering to himself, stinking of Vicks VapoRub and Old Crow, whose life experience just might happen to be a treasure chest, if only someone would stop and talk to him. But of course nobody ever does. Woody wouldn’t answer back in any case, because he’s got his mind set on a bulk-mail magazine-subscription “sweepstakes” giveaway offer that “promises” him he’s won a million dollars. All he has to do is get to Lincoln and claim his money. He’ll walk if he has to.

Woody’s adversarial wife Kate (actress June Squibb in a wonderful, salty turn) loudly opines that he’s a fool to believe it, but their younger son David, who still drops off his laundry at his parents’ house and has some time on his hands, sees the road trip as a bonding opportunity. Naturally, father and son encounter a lot of characters on their quest — Empty Quarter characters, to be sure, calm and plainspoken and unfailingly “nice,” unless they’re riled — the same sort of folks filmmaker Payne has been introducing us to since his Citizen Ruth. And we carefully open Woody’s emotional treasure chest.

What better excuse for a re-examination of Dern, one of Hollywood’s least appreciated but most accomplished character actors? The 77-year-old Chicago native, who trained at New York’s Actors Studio and fell in with the likes of Alfred Hitchcock, Roger Corman, Jack Nicholson, Bob Rafelson, Robert Aldrich, Hal Ashby, and Walter Hill in a Hollywood career mostly devoted to portraying heavies and loonies (no small feat), has electrified some 140 movies — notably Westerns and biker pics — with his lean, dangerous intensity. Dead and propped up in a church with a cigarette in his mouth, Dern stole a scene in The Wild Angels. He menaced Jane Fonda in Coming Home, chased Ryan O’Neal in The Driver, tried to blow up the Super Bowl in Black Sunday, and snarled for Quentin Tarantino in Django Unchained.

But Woody is a slightly different proposition. His meanness is largely behind him. Slowly, with each ornery relative or bitter former friend that he and his son encounter, director Payne — working from a screenplay by Bob Nelson — peels back the layers and softens Woody’s calluses. The humor is flinty, not at all like the sun-kissed shenanigans of Sideways. Former business partner Ed Pegram (Stacy Keach) wants his money back. Old girlfriend Peg Nagy (Angela McEwan) sits in a dusty, deserted newspaper office, remembering. David’s cousins are a surly pair of couch spuds. Woody’s prosperous older son Ross (Bob Odenkirk) has no time to spare. The only reason Woody cares about the prize money is to buy a new pickup and an air compressor. The old homestead is now deserted, just like in The Grapes of Wrath and Bonnie and Clyde and a thousand other movies. The plains are endless and so, apparently, are Woody’s memories.

The audaciously titled Nebraska occupies the About Schmidt end of Payne’s filmography, where the protagonist considers eternity from up close and comes to small but important conclusions. In the rare instance in which we get to see Dern stretch out and inhabit a lead character with a richly motivated life, the director turns him inward and hushes his mouth — so it’s a tribute to Payne and Dern’s teamwork that Woody’s journey touches us so deeply. Or maybe it’s just the spell of the Grain Belt.