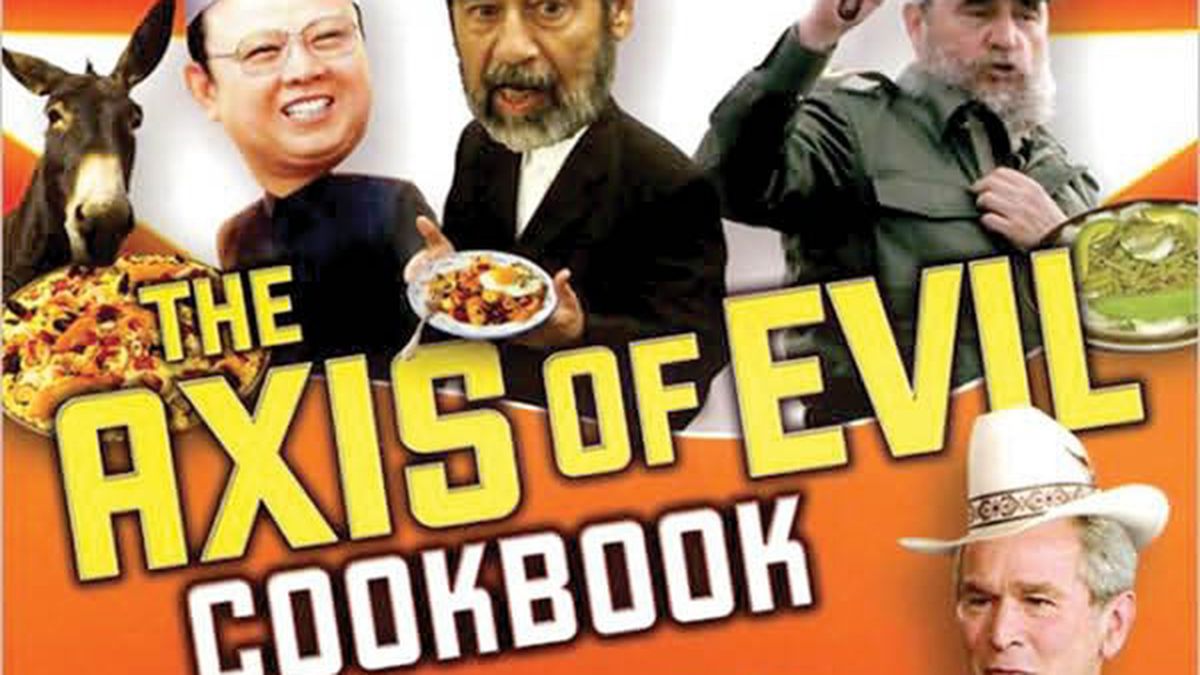 In this month's East Bay book news, dine with dictators and dismiss dogma.

Pokin’ fun at the US president for bein’ a KFC-chompin’, war-wagin’ doof, London’s Gill Partington details what his archenemies eat in The Axis of Evil Cookbook, new from Berkeley- and London-based Saqi Books: “These outposts of tyranny are, after all, places where citizens are denied the basic human right to buy a Chicken McNugget. … How can humans survive such deprivation? What downright un-American things are they forced to eat?” (Well, in North Korea, they’re forced to eat — nothing. Because they’re starving.) Gently mocking Kim Jong-Il, Mahmoud Ahmadinejad, et al., she finds GWB pretty much the funniest and evilest of all. The recipes (which include sheep kidney toast, dog stew, Cuban hamburgers, and much more) do look tempting.

“What will happen when your son insists on wearing a dress to school?” asks the press release for The Transgender Child, a handbook for parents by Yale University LGBT Studies coordinator Rachel Pepper and Stephanie Brill, founder of the Children’s Hospital Oakland Support Group for Parents of Gender-variant and Transgender Children and Teens. “What do you do when your toddler daughter’s first sentence is that she’s a boy? Is this ever just a phase?” Hmm, is it?

All mentions of ham were excised from the Iranian edition of Firoozeh Dumas’ memoir Funny in Farsi, she recounts in its sequel, Laughing Without an Accent, whose many anecdotes include one during her undergrad years at UC Berkeley, when beet juice at lunch created the false next-day impression that she was experiencing intestinal hemorrhaging: “My stools were red.” Madcap!

“If Calpurnia could fall under the spell of a haruspex,” muses the sleuth Giordanus in Berkeley novelist Steven Saylor’s latest ancient Roman mystery, The Triumph of Caesar, “if Antony the man of action could while away his days in a drunken stupor, if an Alexandrian dancer could take up residence in Pompey’s house, could Cicero become a murderous conspirator?” Signs point to yes!

The expression “wayback machine” derives from the “WABAC machine,” a fictional time-travel device used by the professorial cartoon dog Mr. Peabody on The Rocky and Bullwinkle Show in the ’60s. Mr. Peabody’s creator, 1933 UC Berkeley grad Ted Key — who also created the cartoon maid Hazel in the ’50s — died this month at age 95. His books include Many Happy Returns, The Biggest Dog in the World, and The Cat From Outer Space. Both Hazel and Mr. Peabody were smarter than most of us.

A childhood stammer made Bruce Patterson “mostly mute” until, as a Vietnam War soldier, he awakened from a six-week malarial fever. Since then, the words have flowed. New from Berkeley’s Heyday Books, Patterson’s memoir Walking Tractor describes a feisty life spent as a ranch hand, steel-slinger, cat skinner, chokersetter, and civil-rights activist. His stint as a would-be screenwriter was aided, he recounts, by “a wily old New York show-business Jew.”

A beggar’s bowl keeps refilling as he shares his gleanings with other indigents in Todd Walton’s short-short story collection Buddha in a Teacup. Although the ex-Berkeley author claims to have “scant interest in Buddhist dogma,” he’s nonetheless “captivated by the wisdom and compassion of Buddha.” Thus the stories ponder nonviolence, compassion, and forgiveness. Walton’s debut novel, Inside Moves, was made into an Academy Award-nominated 1980 film; its protagonist, disabled after a failed suicide attempt, hangs out in an Oakland bar.

Not One Bit Brit

Set in England, Elizabeth George’s bestselling Inspector Lynley mysteries include pubs, beans on toast, and a New Scotland Yard sleuth who is also an earl. Her latest, Careless in Red, takes on the Cornish surfing scene. George is American and studied briefly at UC Berkeley.

Procter & Gamble runs a separate ad agency to access Latinos, and “conducts copious research to understand this market. For example … P&G learned that many Latinas felt alone in the United States, and that they craved recognition from their husbands and children,” Andrea Gardner writes in The 30 Second Seduction: How Advertisers Lure Women Through Flattery, Flirtation, and Manipulation, new from Berkeley’s Seal Press. In one Tide detergent ad aimed at Latinas, “a husband and son notice how much work is being done around the house by their wife/mom, and they thank her. … P&G received tearful, thankful calls from women on the company’s toll-free line.”

In fifth grade, when a teacher told Alretha Thomas that she had writing talent, Oakland-born Thomas thought: “How can I be a writer? I live in the projects.” Decades later, she’s the author of the NAACP Theatre Award-winning play Civil Rites and a new novel, Daughter Denied. At local libraries and schools, Thomas leads “Let’s Write a Novel” workshops.

Seacology Builds Schools to Save the Planet