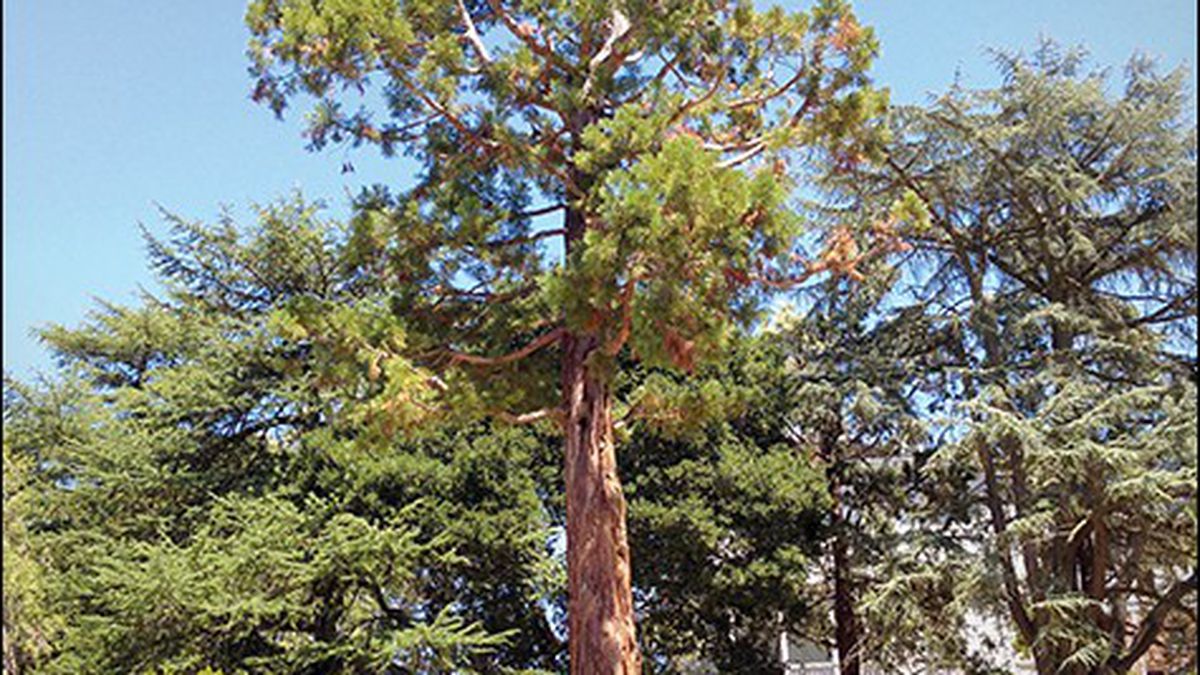 The eighty-foot-tall redwood at the late naturalist’s historic home in the East Bay has a fatal disease. But an arborist has figured out a way to save its heritage.

John Muir hiked across California in 1868 in search of a new life. Fed up with cities, he walked 350 miles from San Francisco to the Sierra Nevada looking for God, fresh air, and a job immersed in nature. He fell in love with the high country — the sun-dappled meadows, lush groves of trees, and cascading waterfalls. Here, he decided, was his career — telling America about the glory of such places and helping to preserve them. He became a great environmentalist, co-founder of the Sierra Club, camping buddy of President Theodore Roosevelt, and author of dozens of books and articles.

In the 1880s, during one of Muir’s many trips to the Sierra, he dug up a three-foot-tall redwood and re-planted it on the grounds of his home in Martinez. The tree was his connection to the mountains.

The redwood is still alive. It’s known as the John Muir Giant Sequoia. Eighty feet tall, it’s situated at the John Muir National Historical Site, which includes Muir’s home and extensive grounds. The tree looks healthy and beautiful to the untrained eye, but it’s quite ill, besieged by internal fungi that can’t be eradicated. In fact, it might die. If it does, the world will lose a living link to a notable man. “The tree enables us to make a personal connection to John Muir,” said National Park Service historian Paul Scolari. “It’s an important symbol.”

Keith Park is probably the leading expert on Muir’s redwood. Since 2009 he has been a horticulturist and preservation arborist for the Muir site, responsible for plant life on the main part of the property, including some three hundred trees. He has assessed the redwood’s prospects and is not optimistic. “It might die at any time,” he said. “Maybe next year. Maybe ten years from now, or twenty, or fifty. We just don’t know. But whatever the time frame is, we need a back-up plan, just in case. This tree is important to our nation’s history.”

So Park and Scolari decided the Muir redwood should be cloned. Plant experts have cloned vegetation for hundreds of years. They snip small cuttings and plunge them into nutritious soil, generating independent root systems, and, eventually, exact copies of the original plant. Some trees are easy to clone — young fruit trees, for example. But certain species present problems, including old redwoods. Park tried to clone the Muir sequoia but wasn’t successful.

Then, in early 2013, he read a newspaper article about David Milarch, a nurseryman in Michigan who has undertaken a staggeringly ambitious project — cloning the world’s “champion” trees (the biggest tree of each species) and saving their genetics in an archive, a sort of Noah’s Ark of strong little trees. His dream is to launch a worldwide movement wherein thousands of people plant millions of cloned trees, mitigating the effects of pollution and climate change, and saving the planet.

Milarch may be the world’s best tree-cloner. He has even been successful with old redwoods. “Ah-ha!” Park recalled saying at the time — here’s a guy with the know-how to clone the Muir redwood.

The Muir tree is not a “champion” — at eighty feet, it’s not even close to being the biggest of the species. But Park wondered if Milarch might bend his rules to save a piece of history. Milarch said yes.

The project gathered momentum in May 2013, when Park climbed the Muir tree to obtain samples. Ascending to a height of forty feet using high-strength rope, he snipped about fifteen cuttings. He sent them to Milarch by overnight delivery.

Milarch, helped by his sons Jake and Jared, placed the cuttings in special growth medium under bright lights. Last November, after six months of tender loving care, good news came forth from the Milarch workshop: The cuttings had sprouted roots. In the world of cloning, roots equal success.

The John Muir Giant Sequoia has thus been duplicated in the form of cute little redwoods growing in plastic dishes in Michigan. If the parent dies, offspring are ready to take over. Park is thrilled to have a back-up plan, although he’s not enthusiastic about planting clones in Martinez — weather and soil patterns there aren’t ideal for a giant sequoia. (The fungal problems faced by the original can perhaps be traced to less-than-perfect growing conditions.)

Meanwhile, Milarch is pleased to have taken one more step toward raising humanity’s tree consciousness. He is a bit surprised to find himself engaged in such a task.

As a young man, he made his living growing shade trees, devoting off-hours to drinking, arm-wrestling, and bare-knuckle fighting. Then in 1991 he had a near-death experience due to massive failure of his internal organs. Lying in bed, he had a spiritual awakening, he said. Once he recovered, he quit booze, stopped fighting, and became more aware of his sensitive side.

After another spiritual experience a few months later, Milarch began to devote his life to cloning champion trees and planting them — and has been doing so ever since.