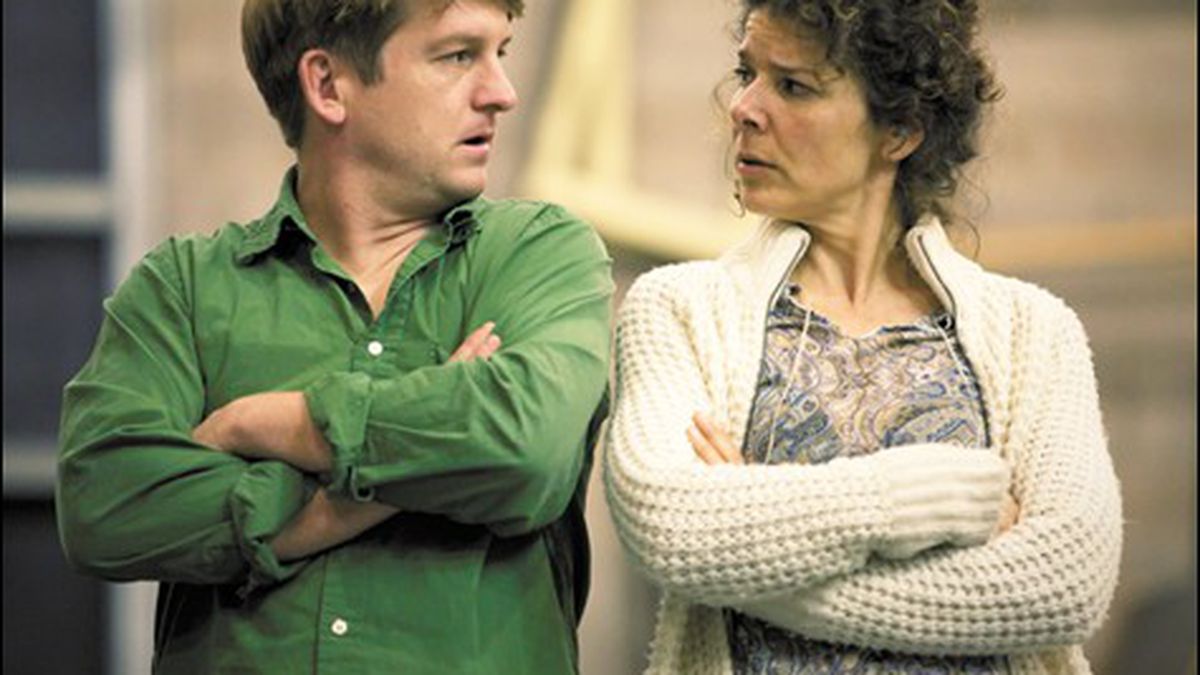 Grief begets denial, which generates pain, which leads to rage, which causes loneliness, emptiness, and, ultimately, acceptance — according to conventional wisdom. Supposedly, each emotion runs its course and fizzles out. The primal gives way to the rational. The yawning, open space tapers in; the story culminates with a clean resolution. Not so for playwright Jenny Schwartz, who adds a few “stages” of her own. Between denial and acceptance comes sublimation, a lot of neurotic dialogue, an abortive love affair, and a broken marriage. Pain disrupts the rhythm of quotidian life. Hence the snags and jags in Schwartz’ new play, God’s Ear, directed by Erika Chong Shuch in a new Shotgun Players’ production. Spawned from a simple narrative about a mother and father mourning the death of their young son, it’s perhaps the most conceptual play that Shotgun has ever produced. It’s certainly the most complicated.

Most plays follow a linear narrative structure, wherein a problem is introduced, and we get to watch the characters work it out over a series of five acts. In this case, the problem occurred before the curtain went up. Mel (Beth Wilmurt) and Ted (Ryan O’Donnell) emerge in the first scene to tell the entire story. Their son drowned; their marriage is unraveling; they were asked to consider organ donation. Ted fixates on death, and says that everywhere he goes he meets people with dead sons. Mel preoccupies herself with minutiae: her feet are pale, the dog refuses to eat, their six-year-old daughter Lanie (Nika Ezell Pappas) aspires to be Helen Keller. The next ninety minutes are a journey into two people’s minds as they try to make sense of what’s happened.

What results is a strange, intentional blurring of psychology and reality. Every time a situation threatens to resolve itself, the characters seem compelled to muck it up. Mel — whose name is short for “Melanoma” — buys a killer fish for the aquarium, and lets it cannibalize everything in its wake. Ted gathers up his suitcases and boards a flight for a business trip, possibly for good. Mel tries to bury her son’s G.I. Joe toys, but they escape through a foxhole in the center of the stage. The tooth fairy (Melinda Meeng) emerges in a pink gown that contrasts the snowy landscape of the stage. She leads a cheery girl-group number with Mel and Lanie that’s actually a cruel joke about order and stability: The sun is rising on the sea, my bowl is full of ch-ch-cherries…My life is like Act 5, scene 3, where everybody m-m-marries.

As with most musicals, the song-and-dance numbers here serve to comment on the story, rather than steer it forward. But in this case, the dialogue isn’t a plot engine either. If anything, it serves to delay and defray the action, and make a simple story infinitely more complicated. Characters repeat the same lines over and over again. Mel retells the story of Lanie’s birth at least half a dozen times before Lanie starts regurgitating it. Movements loop, too. Lanie pops out from behind the stage and curls up in a fetal position, while other characters deliver their monologues. G.I. Joes keep escaping from their snowy graves and percolating back into Mel’s subconscious. The constant repetition has a numbing effect, but it also sheds a weird light on a banal series of activities.

Wilmurt is the real star, here, since she’s capable of communicating in purely emotional terms. Her long, wiry body is sometimes a weird fit for Shuch’s choreography, but she has a decent singing voice, and her desperation seems palpable. O’Donnell is burdened with a rather strange, unsympathetic role. He tries to escape, rather than go mad with grief, and his inert expressions reveal little of what a bereaved parent should be feeling. Zehra Berkman is simply wonderful as Lenora, the train-wreck lounge lady who tries to seduce Ted over martinis. The characters flounder through an ethereal landscape (designed by Lisa Clark) that could either be cumulus, or a field of snow (it serves in both capacities). No object is what it seems: Ted calls home through a cup that’s attached to a telephone wire, which doubles as a clothesline. Light design by Allen Willner gives the illusion of a space that’s alternately expanding and contracting.

God’s Ear is the type of play in which Erica Chong-Shuch specializes. Trained as a dance choreographer, she works best by using movement and dialogue to tease out character emotions. Her play The Future Project: Sunday Will Come (a collaboration with Campo Santo) used the story of a fish named “Other” to talk about mortality. Her choreography in Shotgun Players’ Three Penny Opera conveyed the rage and irreverence that underpinned Brecht’s simple folktale. Similarly, God’s Ear traffics in heightened forms of expression, using dance to tell the story when language fails. The script would make very little sense in isolation. Characters behave erratically, and there’s no “voice of God” narrator to explain what’s happening. That, of course, is where Shuch’s artistry comes in. She fills in the story-gaps, and makes the unresolved seem beautiful and clean.