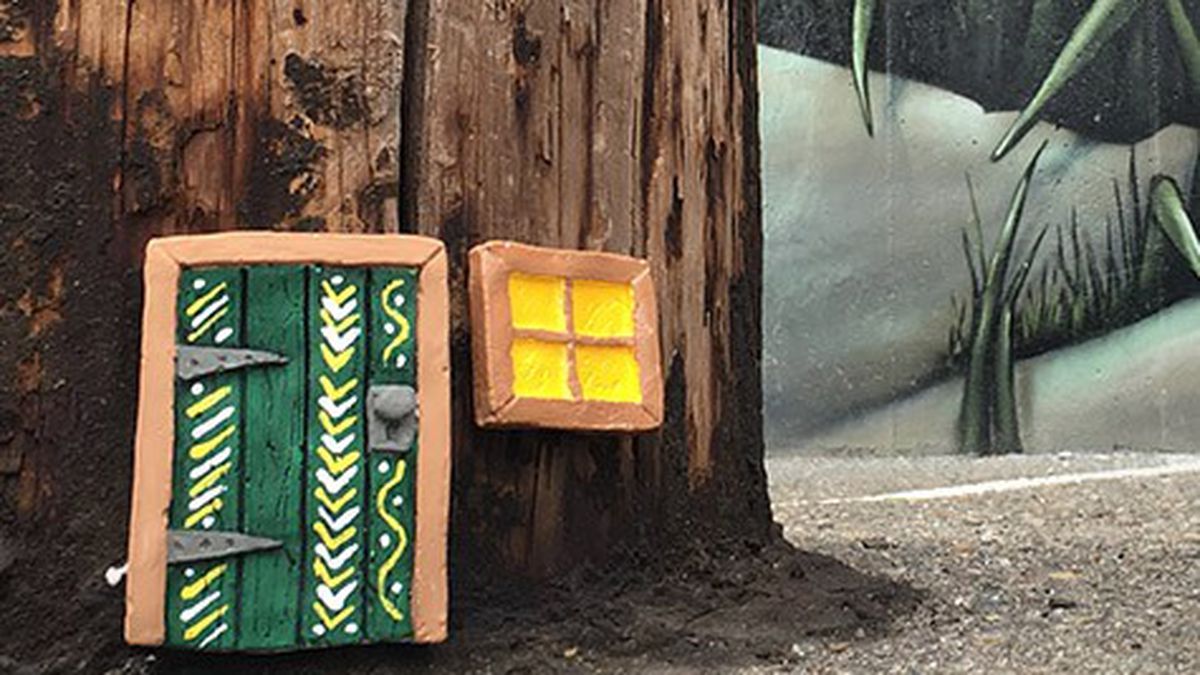 Mouse Doors to Your Imagination

To say Mows (or @Mows510, as he’s known on Instagram) doesn’t look like a stereotypical “vandal” would be an understatement. On the night we met, the 54-year-old tech worker was dressed in light blue jeans and sensible brown walking shoes; glasses hung from the neck of his beige fleece. Despite his decidedly Dad vibe, the father of three has created sixty illegal, albeit adorable, street installations on walls and telephone poles in Alameda and Oakland.

Mows (pronounced “mouse”) agreed, under the condition of anonymity, to let me tag along on one of his weekly outings. He opened the back of his minivan and showed me the goods: four three-by-four-inch “urban mouse doors” made out of resin with matching windows and door mats. Then, we hopped in and drove to the first location, a wall of murals and mosaics in Jingletown.

Because the pieces are made ahead of time, the installation process was incredibly quick. Mows placed the door where he wanted it and pressed. Concrete adhesive did the rest. The whimsical power of the tiny door was immediate. Suddenly, the otherwise flat wall appeared to open into another world. As one admirer of the doors said, “They create magic.”

The unlikely street artist’s obsession began in 2009 when he spotted a purple hippopotamus by Mosko et Associes (French duo Michel Allemand and Gérard Laux) stenciled on a Paris wall. Soon, he was taking 600 or more photos of street art on his frequent business trips to Paris and London. He was particularly drawn to the three-dimensional pieces he saw, including Giger-esque wall sculptures by Cityzen Kane, Gregos’ face molds, and Ronzo’s cartoony concrete figures.

“I guess all along I kind of wanted to do street art, but I didn’t know what to do,” said Mows. Then, in August of last year, he saw a piece in London by the Polish artist Above.Love.Art that pushed him over the edge. Shaped like a rectangular Pac-Man ghost, the blue creature was “so simple,” said Mows. “I was like, ‘Shoot, I’m just going to go do it.'”

Mows installed his first door on November 15, 2015, along Alameda’s estuary. Some of his doors are painted a solid color; others are themed. A pot leaf decorates the entryway he placed near Oaksterdam University. Yellow crime-scene tape crisscrosses a door he originally installed in the Alameda police station parking lot. (“I chickened out and came and got it that evening,” said Mows.) One pedestrian favorite references Mondrian with its squares of primary colors and black and white grid. Another features reproductions of pieces by GATS, Swampy, IROT, and other local graffiti artists that Mows admires.

For some aerosol artists, the appreciation is mutual. “The doors appeal to my inner child,” wrote GATS, a prolific Bay Area graffiti artist, in an email. “They make you imagine a whole little business or miniature underground club inside.” GATS said the pieces reminded him of “a mix between The Little People Project (a London-based artist who photographs miniature figurines doing politically witty things in the streets) and the vinyl toy culture that encourages artists to collaborate by decorating another artists’ sculpture series.”

At first, Mows assumed nobody would notice the doors. But every time he went to check on them, he’d find kids squatting around them, or someone with a stroller would be stopped in front. “There are children who have hung out for a long time just to see who will come out [the door],” said Mows.

Thanks in part to his Instagram account where he accepts requests (such as the Oaksterdam piece), his audience continues to grow. Oakland-based Crooked City Cider has offered to trade cider for a door with the company’s logo on it. DB Burkeman, author of Stickers: From Punk Rock to Contemporary Art, contacted Mows for photos of his doors to include in his second compendium of stickers. Mows has also done long-distance collaborations, including a heart-covered door he designed with his inspiration-turned-friend, Above.Love.Art. The Alameda Island Fairy Doors Facebook group started to pay attention to his work, too, and soon he was embraced by a community that he hadn’t known existed.

As it turns out, Mows is not the only one on the island making mini doors. Fred Hogenboom, owner of the auto repair shop Fred’s Wrenchouse, has made approximately fifty wooden fairy doors with his granddaughter since last year. A Girl Scout troop has gotten in on the game, too. And with more fairy-door-making parties in the works, the island is sure to see even more diminutive doors soon.

“There are people in that Facebook group who are alerting other people that such and such a door is broken,” said Mows. “They’ll post pictures of doors I’ve done where they’re debating which adhesive to use to put it back together.”

Some fans have started to add to Mows’ front porch scenes as well. In Jingletown, someone placed a petite Adirondack chair next to the door. “I love that it’s become this interactive thing,” said Mows.

Now that he’s realized that people are finding joy in the doors, he plans to hit high foot traffic areas in Oakland next, such as Lake Merritt and Chinatown. “Maybe I can inspire some different neighborhoods,” he said.