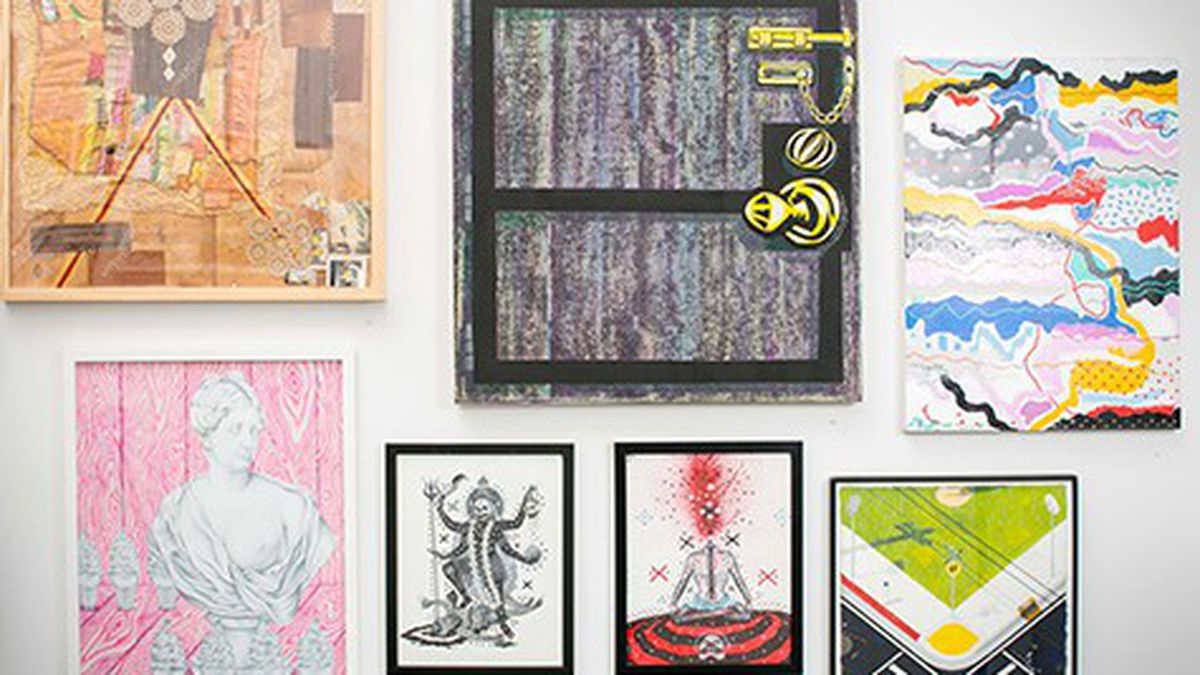 Mom Would Be Proud

On the last Saturday of January, the sidewalk between Broadway and Franklin Street was crawling with young art enthusiasts. The mob of stylish twentysomethings spilled out of Good Mother gallery (408 13th St., Oakland), with concealed Coors in hand and art school speak on the tongue. It was the kind of crowd you’d see at a hip gallery in San Francisco, on a good night. But rarely at an Oakland art opening. The few hundred patrons were there to welcome the new kids on the block, Good Mother owners and curators Jared and Ian Jethmal and Calvin Wong, and see their inaugural show, Tired Hands.

The cozy gallery was almost as packed with art as it was with people. Tired Hands features work from more than fifty artists, tightly placed onto the walls in a salon-style hanging. The theme between the works is earnest and straightforward: They collectively represent the taste of the curatorial team and offer a glimpse into what they intend to deliver. That taste turned out to be largely flavored by boldly colored paintings indebted to lowbrow styles of illustration and infused with the flattened design aesthetic typical of art influenced by internet culture.

Wong and the Jethmals are in their early- to mid-twenties. They know who they like locally, but they also know who the broader hype is blowing up. With Tired Hands, they tapped into a popular artistic arena that rarely receives wall space in Oakland (with the exception of at nearby LeQuiVive Gallery), but consistently appears in popular art magazines like Juxtapoz and Hi-Fructose, and on their blogs. Fans of such outlets might recognize names in the show, such as Jason Jagel, Spencer Keeton Cunningham, Apex, and Chad Hasegawa. Their gallery work falls into a sweet spot — nestled next to graffiti and street art — that’s perfect for drawing an audience because it feels fresh and relevant, while referring to an easily relatable aesthetic legacy.

In “Statue of Venus” by Cahill Wessel, a classical marble bust sits next to a row of perfectly swirled vanilla ice cream cones in a wooden room brightly filled with intricate, pink wood grain. The piece works as a hand-drawn allusion to the synthetic digital textures of early internet art and fits seamlessly into Wessel’s broader body of pop culture iconography-filled work. On the other end of the same wall, “Hard to Break” by local artist Cannon Dill employs a similarly swirly texture in his black-and-white painting of hands morphing into a smoking feline.

One of the most satisfying results of the show is seeing work by local artists comfortably placed within the contemporary art context in which they most thrive, but are often separated from on a local scale. Gathered together, the work amounts to a youthful cry of existence announcing the timely arrival of a new and promising generation of curators in Oakland.