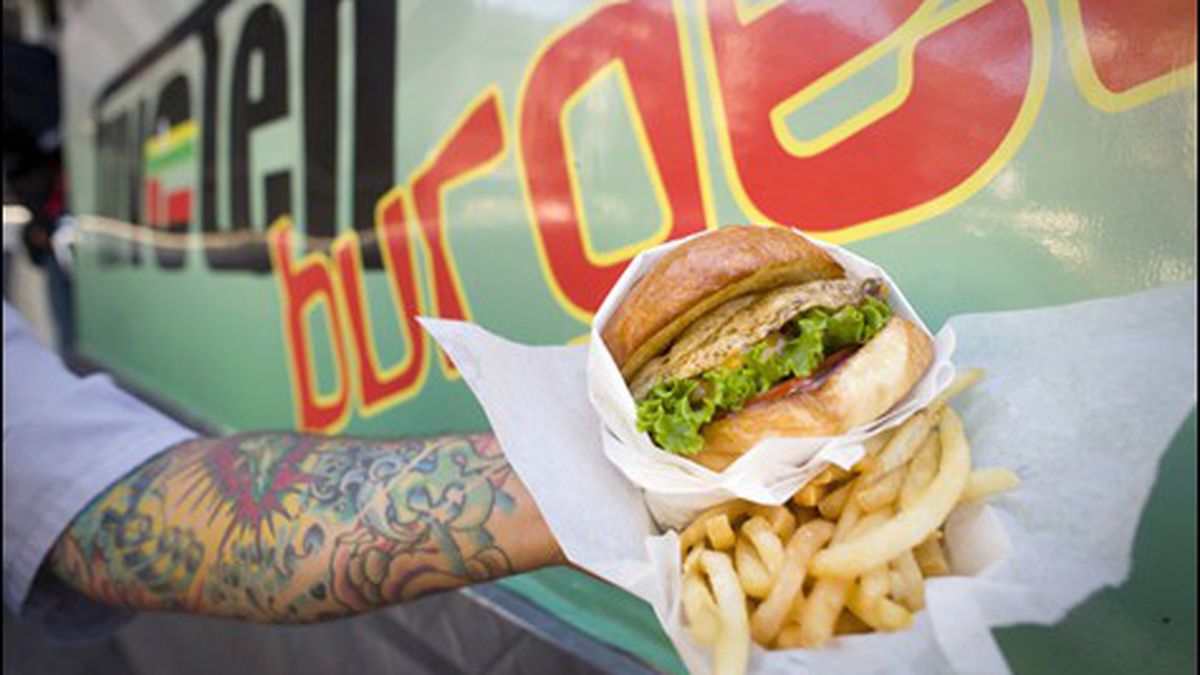 Fiveten Burger and Doc's of the Bay challenge the myth that new-school food trucks are bougie.

It wasn’t long after Roy Choi’s first Kogi Korean taco truck pulled up to some sun-bleached curb on a side street east of LA that American street food found itself segregated into two distinct classes: the traditional mobile taco slingers known as loncheras for the Spanish-fluent proletariat, and trendy trucks for the Twitter-following bourgeoisie who like sandwiches (preferably made with waffles) and any version of tater tots, ironic or otherwise.

If your knowledge of food trucks comes mostly from TV, well, the notion that sellers of buche burritos and pulled pork sliders should line up along antithetical pavement stripes seems right. Talk about two Americas, hell: Producers of The Great Food Truck Race would never conceivably invite some truck with tarnished quilted siding, like the one ladling out Michoacan-style birria on the southern reaches of International Boulevard, to compete for primetime glory.

Of course, anyone who eats regularly on the street should know that this is a false dichotomy. Yes, Spencer on the Go sells cauliflower bisque and frog legs sauced with curry (the French kind, with cream) to Folsom Street. But most new-school trucks (the kind Ask A Mexican! columnist Gustavo Arellano calls “luxe loncheras”) appeal to the proletariat just as much as the early-morning tamale and champurrado carts dotting Fruitvale Boulevard for the benefit of landscapers and maintenance men on their way to work sites — at least to the modern proletariat of software coders, third-grade teachers, and the odd alt-weekly food writer.

Best evidence of this: the two burger trucks plying the East Bay, Fiveten Burger and Doc’s of the Bay. Both rode in on the kind of convoy that makes North Berkeley streets rumble for Off the Grid Wednesdays. Both also feel like throwbacks wrapped in unexpected cladding, a new form for the kind of American burger shacks Ray Kroc wired with an extermination clock back in 1954, only this time with wheels, a roaring Husky generator, and maybe the pierced-nostril face of a woman hovering in the order window.

Fiveten and Doc’s not only offer up very good examples of America’s surest cultural artifact — the burger — they make that artifact feel somehow connected to the street, which is precisely what East Oakland’s best luxe-free loncheras, ones like Pipirin and El Taco Oaxaco, manage to achieve with their tortas and gorditas. Dichotomy? Not here.

What I love about independent food trucks of any vintage is the way they offer such a raw taste of entrepreneurship. (“Independent,” since more trucks are being harnessed to the engine of promotional marketing these days, and with advancing slickness — observe this season’s Pico de Gap truck pimping the company’s fall denim line, with guest taquero Ryan Scott of 3-Sum Eats rocking a pair of 1969 Gap jeans. Cue the cynicism; turn it up loud.)

It’s there in a lot of brick-and-mortar places, too, that hot blast of entrepreneurship, though muffled by restaurant ritual, plus walls. Stand in line at Fiveten Burger somewhere on Emeryville’s Hollis Street, and what you get — apart from a burger facial, if the line puts you in position to endure the truck’s rear exhaust vent — is a sense of just how hard owner Roland Robles hustles.

Glimpsed through Fiveten’s cloudy Plexi, Robles has three-foot dreads even a five-gallon beanie can’t contain and the face of a Mayan glyph. It’s just over a year since Robles — former chef of San Francisco’s shuttered Bar Johnny — rolled up to Oakland’s Era Lounge in Fiveten, a converted lonchera that had logged time in Oakland’s taco zone. These days it’s not surprising for Robles to make three stops a day, starting with lunch in Emeryville, happy hour in front of Somar or Acme, and nights back at Era or The Layover.

Best thing about a Fiveten burger: The fact that it considers itself “artisan,” as the banner on the truck’s backside reminds you, is hardly noticeable. Sure, Robles uses better than decent beef for the basic (he calls it a Loaded Burger), far better than decent for the Grassfed (it comes from Eel River Organic in Humboldt County), and has the shiny buns custom-baked according to his recipe, but he stops short of overreach.

There’s grilled cheese, a sausage sandwich with the central ingredient sourced from Taylor’s in Swan’s Marketplace, and a grilled chicken sandwich, but you don’t want any of those (props to Robles, though, for buying French rolls from International Boulevard’s Buiphong Bakery, banh mi maker and bread supplier to countless shops). You do, however, want the garlic fries, freezer specimens Robles cooks “the shit out of” (his words) and tosses with oil flavored via infusion with garlic roasted on the truck’s griddle. They’re good.

Fiveten’s Loaded and Grassfed patties both show a medium-small grind, relaxed texture, and basic seasoning. You’ve got your ruffle of green-leaf lettuce, your red onion rings and tomato slice, your mustard, mayo, and pickles, and the bun is sweeter than most, which just might help it develop a corona of lovely crispness on the grill. And even though, for a buck more, you can add blue cheese imported from the Auvergne (a moist, funky skin of gray-green clinging to the warm bun top, which is to say delicious), Fiveten’s aspirations stretch as far as a really good bar burger, but no farther. And that’s just fine.

If Robles is the Albus Dumbledore of East Bay burger masters, wise enough to know restraint, then Zak Silverman is Harry, some earnest, indefatigable boy wizard of the rolling flattop. Twentysomething Silverman clocked time at Berkeley’s Elmwood Cafe, then worked on the Ebbett’s Good to Go truck with Suzanne Schafer and Shari Washburn, an informal apprenticeship.

In April, Silverman, Lauren Smith, and John Babbott launched a truck of their own, Doc’s of the Bay, wrapped in a circus-stripe motif that seems the perfect correlative for the good-natured optimism of its operators. Based in the East Bay, Doc’s plies both sides of the bay — Off the Grids east and west, Bites Off Broadway, and select Emeryville lunches, plus it has half a dozen pending permits for public sites nearing approval in San Francisco.

Silverman is master of a burger technique he calls the Midwestern smash. He starts with a rough cube of grass-finished black angus beef seeded with minced onion, and forms it into a patty on the hot griddle, adding pressure from an old-fashioned iron bacon press as it cooks. Compression may be precisely what burger authorities tell you not to exert (you’ll squeeze all the juices out, they warn), but a Doc’s Classic Burger is anything but dry, anything but compact.

At medium-rare, the patty has a core of purplish-pink — it’s loose-textured, soft. It’s a good match for the challah bun, from Emeryville-based wholesale bakery Firebrand Artisan Breads, which uses a wood-fired oven. The smear of secret sauce knows how to stay in the background, adding flavor without asserting itself, the same way the stretchy cap of cheddar does. A Doc’s Classic is more self-consciously premium than a Fiveten burger, a quality that suits the truck’s bright and energetic vibe. It’s a burger I’d be happy to encounter at some brick-and-mortar place. The fact that I can get it on the street, and for only $7, is pretty damn impressive.

Nothing else I’ve tasted from Doc’s has quite the polish of the Classic, though everything radiates similar energy. A vegetarian black bean burger offered whole beans studding a disc of mashed ones, shedding corn kernels as I ate. Cumin carried the flavor, and though it seemed something short of satisfying next to the Doc’s Classic, that’s a standard not many sandwiches — even carnivorous ones — could meet.

The skin-on fresh-potato fries had a nice dusting of herb salt, and the fresh-tasting house-made ketchup wore its spices on the outside, rather like some tamarind-based chutney. And while I didn’t exactly dig the sautéed green beans (a bit too oily, too raw-tasting), I appreciated the gesture of a French-fry alternative, just like I appreciate Doc’s produce-based weekly specials, things like succotash or roasted corn with basil butter.

Oh, and in case you were wondering, the truck’s name is a nod to Cannery Row — Silverman says Doc, Steinbeck’s protagonist, is a symbol for the kind of unpretentious community life he and his partners hoped would coalesce around their order window. Sounds a whole lot like Fruitvale to me.

New Hampshire But Not California