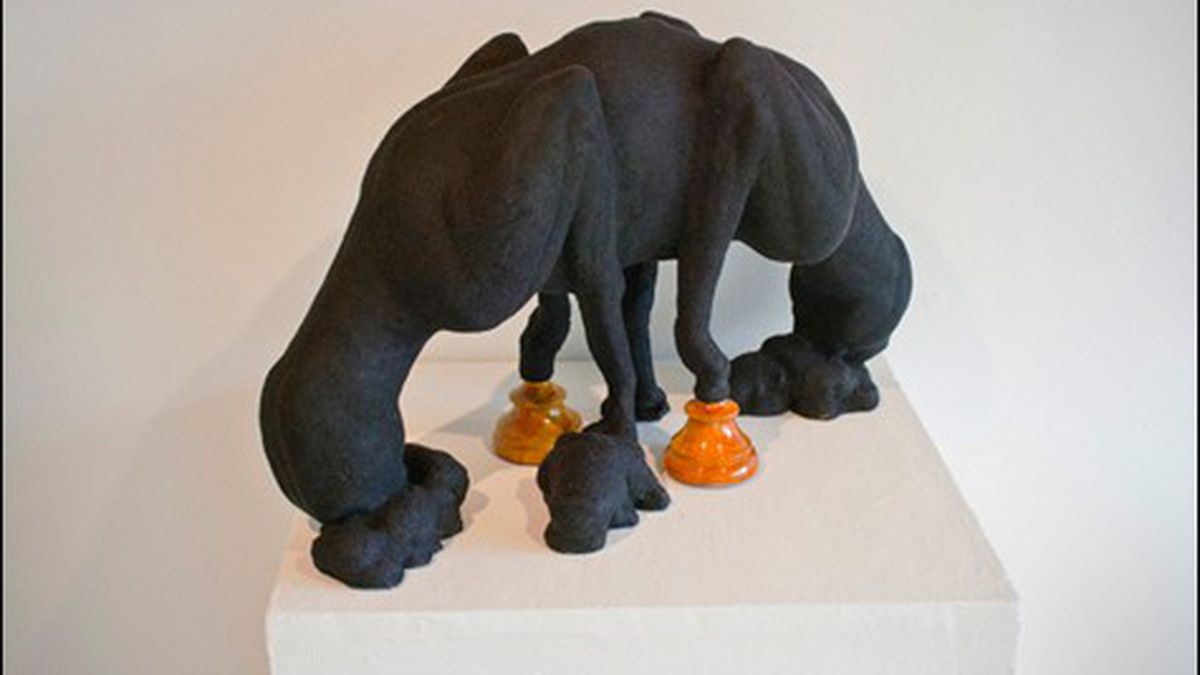 Greeting visitors to Back Domain, Misako Inaoka’s latest solo show at Johansson Projects, is “Antique Head,” a bust of what appears to be a horse with damask fabric for hide, mounted on a baroque, lacquered wood pedestal. The gallery (whose signature moss ceiling is the work of Inaoka, by the way) abounds with creatures exhibiting these distinctive traits: animal/furniture hybridity, an unsettling lack of identifying features (faces are erased, heads misplaced, hands replaced with found organic material or furniture parts), luxurious materials.

But if “Antique Head” suggests formal closure in its stuffed, sewn-up and mounted solidity, or a tidy metaphorical statement pertaining to wildness and domesticity, it entirely misrepresents its mutant brethren. The bulk of Inaoka’s creatures actually exist in states of perpetual transformation, hopelessly lost between categories, impervious to conclusive interpretation. In effect they are a much more delightful variety of disturbing than the “Antique” prelude might suggest.

“Drapery,” a three-legged burlap beast clutching a tree branch, appraises the viewer with its non-head; a large spider with a feathered body and tree branch limbs shields its young; a quadruped-cum-ottoman stands by; “Rorschach,” a frightful creature of inky-black fabric with lumpy extremities and scrawny, bird-like joints, appears to be mid-mitosis, dividing from the middle.

“I see them as living creatures in the process of never-ending transformation rather than ‘objects’ frozen at some point,” said Inaoka. “I don’t even know what one will turn into in the next second, and that’s what keeps me excited in the studio.”

Along with the beguiling surrealism of these creatures, their refusal to formally or conceptually resolve is the very source of their charm. “Geometry of a Bobcat,” an abstract hunk of delectably varnished wood, beckons the viewer to inspect it from all angles, revealing key features — the arch of a spine, a protrusion resembling a doorknob, and the bulb at the end of a chair leg — as this process unfolds but never fully collapses into either category, animal or object.

Inaoka relishes the potential held by such abstraction. “The head determines what it is — if it is a raccoon, a deer, a fox, et cetera,” she said. “By leaving it blank, I can work with an anonymous creature and more open-ended responses. I like to keep it out of conclusion.”

And that is precisely it, here: the inherent delight in formal ambiguity and in-betweenness. Search for a greater statement about domestication and the wild, solidity and mutation, and you won’t come up with much; these are simply the arenas from which Inaoka draws inspiration. “The material comes first,” said Inaoka. “I collect organic materials, and then I try to see what new shape the organic piece wants to be formed into.” Here we see the literal, refusing to domesticate.