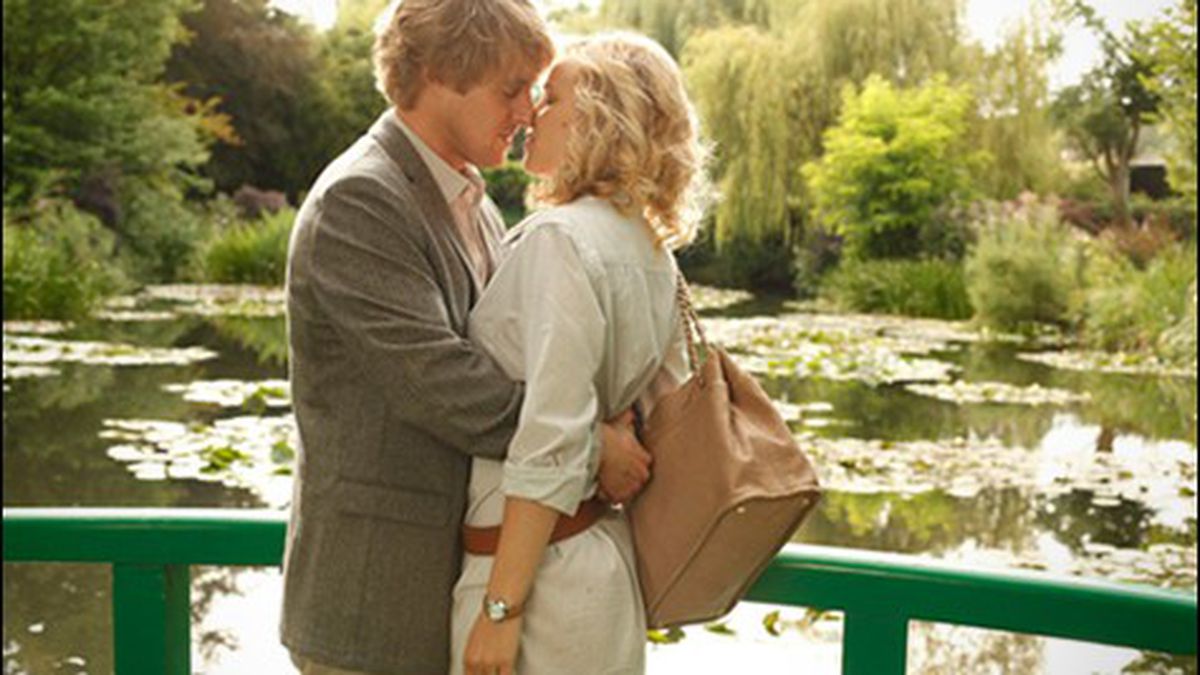 Woody Allen has now reached Paris on his late-period grand tour of European metropolitan areas. Having already plundered London (Match Point, Scoop, Cassandra’s Dream, You Will Meet a Tall Dark Stranger) and various locations in Spain (Vicky Cristina Barcelona), it was only a matter of time before he found his way to the place that Bogie and Ingrid Bergman would always remember.

We’re happy he made the trip. Midnight in Paris is one of Allen’s most charming projects in years, despite all odds. Entirely too many bad movies have been slapped together using the French capital as an excuse, but Allen’s reasons for loving the City of Light are better than most people’s. He isn’t necessarily enamored with Parisian scenery — the gorgeous pre-credit establishing-shot sequence notwithstanding — as much as he is with the spirit of the artists and personalities who have gravitated to the city over the years. Especially the expats.

One such enthusiast is Gil (Owen Wilson), a dissatisfied (what else?) Hollywood screenwriter and would-be “serious novelist” vacationing in Paris with his oblivious fiancée Inez (Rachel McAdams) and her parents, John and Helen (Kurt Fuller and Mimi Kennedy), a huffy Tea Party Republican and a snooty matron who haunts antique shops. As if traveling with the future in-laws weren’t enough punishment for Gil, the Americans accidentally run into a couple of stateside friends — in Woody’s world, grand tours endlessly intersect — Paul (Michael Sheen), an insufferable bore who can pontificate on any subject, and his wife Carol (Nina Arianda).

Nevertheless, Gil is thrilled to be in Paris and especially enchanted by the legacy of the “Lost Generation” of writers, visual artists, and musicians who flocked to the Left Bank in the 1920s. If only he could be like that and write that great novel that’s inside him. Sigh. Inez and her parents think he’s behaving strangely. To make matters worse, Inez seems to be taken with Paul and his pompous know-it-all lectures, which nauseate Gil. So one evening, when Gil plays the killjoy and excuses himself from the group to walk back to the hotel by himself, Inez and her friends are all too willing to let him go.

While sauntering alone through the city’s tourist zone, Gil is confronted by a beautiful antique town car filled with happy drunks, who beckon him over. Before he has time to think about it he’s on his way to a swanky, old-fashioned soirée where in short order he meets Scott and Zelda Fitzgerald (Tom Hiddleston and Alison Pill), the actual living Scott and Zelda, and realizes that he’s passed through some sort of magical Parisian time warp and is now delightedly hobnobbing with his heroes from the Twenties.

The Fitzgeralds, Ernest Hemingway (Corey Stoll), Gertrude Stein (Kathy Bates), Pablo Picasso (Marcial Di Fonzo Bo), Cole Porter, T.S. Eliot — they’re all there in easy reach and very approachable, particularly a woman in their party named Adriana (Marion Cotillard). Gil wakes up the next day in his 2010 hotel room with stars in his eyes. Now he has to make a choice.

It’s assumed that the leading men in most Woody Allen films are obliged to adopt the filmmaker’s trademark mannerisms, even down to dressing like Allen. Wilson happens to be one of the best Allen impersonators in years, possibly because his essential screen personality, in such films as The Darjeeling Limited and Wedding Crashers (in which he costarred with McAdams), is so close to Allen’s own neurotic striver persona. Gil, with his Pendleton shirt, tweed sport coat, disapproving Philistine wife, and rich fantasy life revolving around dead cultural heroes, is an obvious Allen stand-in. And Wilson turns in an appealing performance as a lovable dreamer.

Of the laundry list of early-20th-century literary and arts figures Gil meets, perhaps the most intriguing are the Surrealistic trio of Salvador Dalí (a lit-up Adrien Brody), Luis Buñuel (Adrien de Van), and Man Ray (Tom Cordier), with whom he shares a drink in a cafe. It’s tempting to go on living in the past, but Gil rejects that idea, essentially on practical grounds. The past is completely devoid of danger of any kind, except that of perpetual forgetfulness.

In addition to the promise of a time-traveling tryst with soulful Adriana, there are at least two gorgeous young women (another Allen requisite) waiting for him in the present — a museum guide (French first lady Carla Bruni) and a sympathetic antique shop clerk named Gabrielle (Léa Seydoux), who, improbably in any other sphere than Allen’s imagination, shares Gil’s appreciation for 78 rpm jazz records. Put this whimsical postcard in the “I Heart Paris” file with Alexander Payne’s segments in 2006’s Paris Je T’Aime, mix yourself a Ramos gin fizz, and remember to temper your anachronisms.

Is It Over Yet?