Mid-Week Menu: Alchemy Cafe Is Open, and Cafe Aquarius Is Closed, Plus Lots of Foodie Options for Christmas and New Year’s Eve

Better late than never: Welcome to this end-of-the-week edition of the Mid-Week Menu, our roundup of East Bay food news.

1) After a successful Kickstarter campaign that raised over $11,000, the collective-owned Alchemy Cafe opened last week in its new South Berkeley location at 1741 Alcatraz Avenue. As previously reported, the new space is a big upgrade from Alchemy’s original cafe, which was only about a quarter the size and had neither running water nor a customer bathroom. Chris Myers, one of the worker-owners, told What the Fork that, in order to staff their growing operation, the collective has added three new members on a trial basis, bringing the total to eight. Meanwhile, the cafe’s expanded food offerings might include breakfast tacos, poached eggs, steel cut oats, and cinnamon toast for breakfast, and seasonal soup and a salami sandwich for lunch. 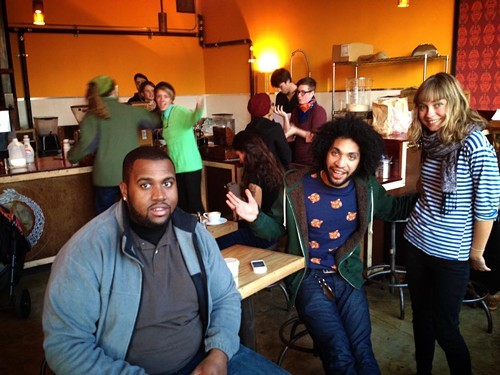 2) The E’Ville Eye reports that Cafe Aquarius (1298 65th St., Emeryville), a longtime neighborhood favorite, has been forced to close due to the landlord’s decision not to renew a “good faith” lease. Supporters of the restaurant aren’t happy; they’ve launched a Change.org petition (with 126 signatures and counting) demanding that the property owners reconsider their decision (h/t Tablehopper).

4) Elsewhere in Berkeley, the proprietors of a new Elmwood restaurant specializing in California cuisine at 2635 Ashby Ave. have been given the go-ahead to move forward with their project, Berkeleyside Nosh reports. These are the same folks who own Comal, which should bode well for this being another attractive, smartly designed restaurant.

5) If you hold an opinion about Daniel Patterson and his restaurants (Plum and Haven here in the East Bay), positive or negative, or if you’ve perhaps wondered about the unusually high chef turnover rate at Plum, this San Francisco Magazine profile is a must-read: “Can a brilliant, driven iconoclast who describes himself as a ‘totally OCD control freak’ really learn to let go?”

6) Here’s a quick (and by no means exhaustive) list of East Bay restaurants that are doing special meals on or around Christmas Eve: In keeping with Italian tradition, Lungomare is hosting a Feast of the Seven Fishes ($55 a person), as are Bocanova ($68) and A16 Rockridge ($75) — all on December 24. Meanwhile, for a New Orleans-style Creole Christmas, Pican is holding Le Réveillon de Noel dinners nightly through December 23 ($65). Finally, Plum is serving a $65 “Charles Dickens Feast” (with figgy pudding!) the whole week of Christmas (except for December 22-25, when the restaurant will be closed). Snag your tickets/reservations while they’re still available!

7) And here are a few fun, food-centric options for New Year’s Eve: Comal is throwing a dance party with antojitos ($40 a ticket). Ramen Shop is celebrating New Year’s and with a five-course set menu ($75). Plum will serve a decadent Gatsby-themed New Year’s Eve dinner ($90-$95); next door, Plum Bar is getting in on the action, too, with a selection of pre-Prohibition cocktail specials. Miss Ollie’s will be doing it up with dinner, dancing, and adult beverages ($100). Tribune Tavern will also have dinner and dancing ($65), with music courtesy of DJ Romanowski. Camino is doing a five-course “Choucroute Royale” for $85. Finally, A16 Rockridge is doing a six-course NYE prix-fixe for $85. 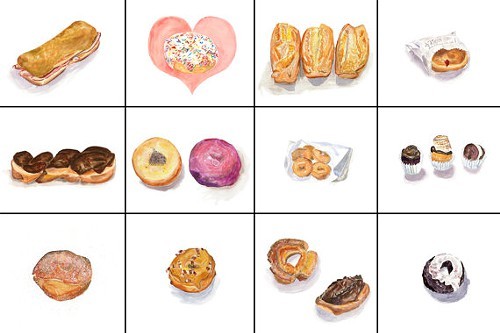 8) A couple of festive tidbits by way of Eater: This calendar, featuring illustrations of popular Bay Area donuts, would make a nice (probably belated, at this point) holiday gift. And take a break from last-minute online shopping to check out this Uniqlo campaign, which stars none other than Plum chef Kim Alter.

9) ICYMI, Marrow needs investors to fund its move to a larger space, and the East Bay is getting a new vegan/gluten-free “fine dining” restaurant.