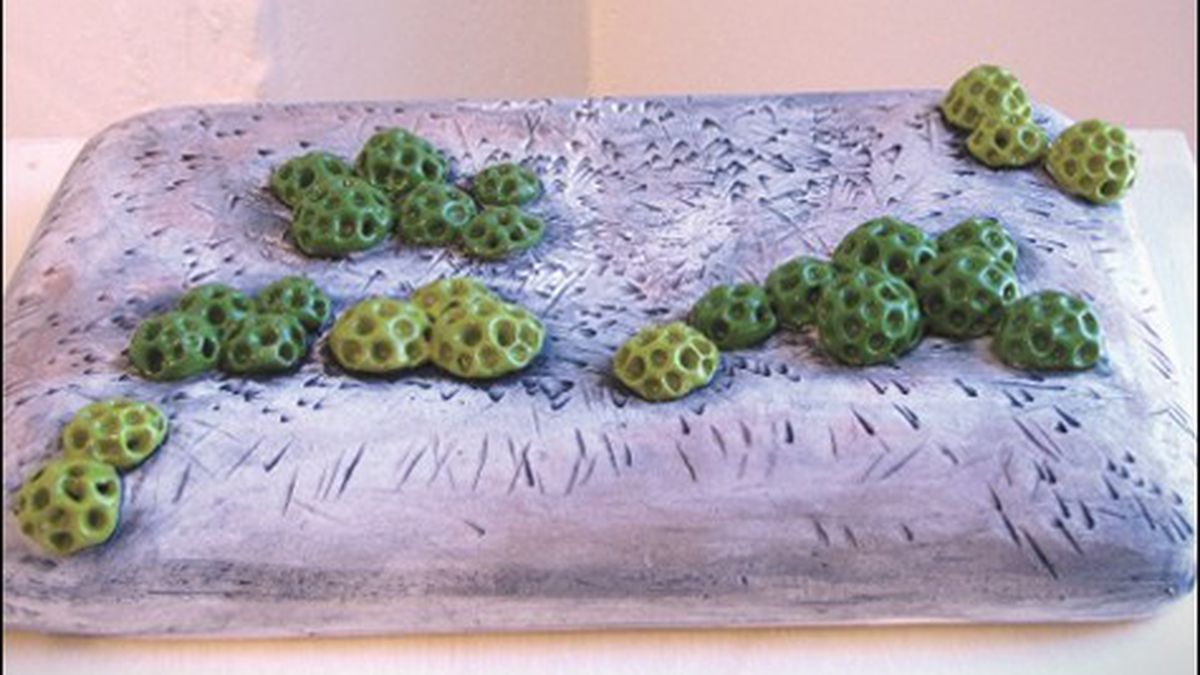 Microcosmos at the Compound Gallery

The Compound Gallery inaugurates its new, expanded quarters with work by two artist-residents, Alisa Goss and Tallulah Terryll, in a show aptly entitled Round Rhythm. Goss’ rounded, biomorphic ceramics are covered with nodules, suggesting animal skins or seed pods, while Terryll’s abstract paintings depict layers of gridded circles, like stains from pallets of damaged bottles. The formal resemblance is clear, but there’s emotional common ground in these reticent, elegant works — perhaps. Both artists consider nature, but from antithetical yet complementary points of view; both are uninterested in straight representation, but allow subjectivity and improvisation to shape the process and the work.

Goss explores the ideas of shelter and protection available through the contraries of solitude and sociability. She writes: “I do not work from reference material, as I am not interested in representing actual existing things. I do, however, find inspiration in naturally occurring repetitive patterns in cells, spores, bacteria, disease, flora and fungi. These influences are abstracted and recreated into intimate objects and presented for close observation. … I explore the ideas of home and domesticity in my works.” Her shell-like, gourd-like forms, transfixed and protected by spikes, filaments, stalks, and flagelli, “purposefully” inhabit their environments. Some resemble the embryonic blastulas and gastrulas, hinting at growth and mutation; others (“Continental”) seem to have succumbed to invasion; still others (“Mothership,” “Survey: Topographical Study”) “live” in dialogue with other members of the same rudimentary, preconscious, instinctive species.

Terryll’s paintings seem to grow, like Goss’ sculptures, through accretion. Her overlaid planes of stenciled circles generate irregular, lobed, even floral, geometric shapes that may suggest Frank Stella‘s Protractor series, or Valerie Jaudon‘s Pattern and Decoration paintings, with their common interlaced woven/plaited forms combating an insistently flat, steamrolled pictorial space. Where Terryll differs from the hard-edged painters is in her painterly treatment of planes, with the watercolored shapes defined by the overlapping of disks (or oeillades, glimpses) appearing both aqueous and aerial — porous, breathing products of nature rather than artifacts constructed with drafting instruments, masking tape, and paint rollers. It might be an over-interpretation based on too much TV drama to see in such liquid-sample arrays a metaphor for perception and analysis. If that interpretation holds any water, however, the paintings become depictions of accidental discoveries and even creative epiphanies, like Nauman’s sculpture of the space beneath a chair. If not, they’re still process-based abstractions of beauty. Reception on Friday, May 7, 7-10 p.m. Round Rhythm runs through May 23 (closing-day tea, 3-6 p.m.) at the Compound Gallery (1167 65th St., Oakland). 510-655-9019 or TheCompoundGallery.com