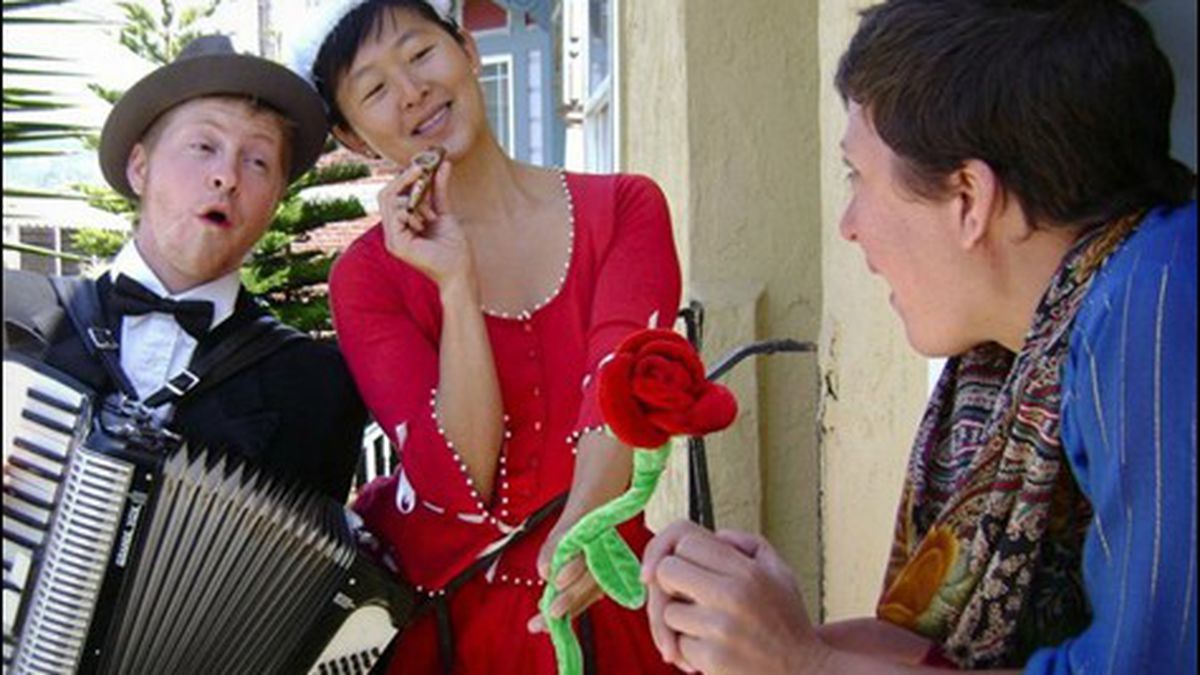 Message in a Tin Can

How Adhamh Roland resurrected the art of the singing telegram.

Red-haired, puckish, and fashionable in the 19th-century sense of the word, Adhamh Roland glowed like a Christmas ornament against the bleak backdrop of San Pablo Avenue and 56th Street, where he stood last Thursday evening. He’d tethered his bike to a pole near the Godspeed motorcycle shop, and he carried several pieces of equipment, including a sturdy pannier and an accordion, which was strapped precariously to his back. Roland leaned against a news rack and gazed down the empty street. It was 7:30 p.m. He was due to work at 8:02 p.m. Half an hour to go, and he hadn’t memorized the song yet.

Roland, who is trans-identified (female-to-male, though he prefers the term “gender-queer”), runs a singing telegram business. It’s one of only a few in the country, he surmises, given that customers have called from places as far-flung as South Korea, Oregon, Abu Dhabi, and his hometown of St. Louis, Missouri. Someone even tried hiring him to deliver a Valentine’s message in Pine Bluff, Arkansas. (He’s still tallying the cost.) For the faraway customers, he offers homemade videograms — not quite the same as having a cute redhead pop up on your doorstep in a faux Victorian valet outfit — but still a unique way of saying “I love you.” Locals get the analog version. Just name the time and place, make sure it’s bikeable from a house in North Oakland, and offer a few details about the recipient. In most cases, a custom-tailored song costs $80, though Roland would consider doing it on trade — in the past, he’s exchanged songs for massages, or jars of homemade sauerkraut. When you think about it, that’s a small price for something that returns dividends.

That explains the gradual influx of customers he’s seen since launching Tin Can Singing Telegram in March. Currently, Roland gets about five requests a month, which is impressive for a novelty act, but low for an unemployed 26-year-old with high artistic aspirations. “Word just needs to get out that it’s a viable thing,” he said, trying to appear sanguine. “According to the old-timers, people did it up until the Eighties,” he added, pointing out that today, many people use modern, bastardized spinoffs of the old-fashioned telegram, like hiring someone in a pink gorilla suit to embarrass a coworker. It only goes to show that we still like to communicate in ways that aren’t mediated by social networking.

To Roland, that seems obvious. He became enamored of singing telegrams while watching the movie Clue as a kid, because there’s a scene in which a girl comes to the door dressed in a bellhop outfit, sings one lyric, and gets shot. (It’s been remixed many times on YouTube.) Although the costume struck Roland as a little ridiculous, the idea of a singing emissary stuck. “That five-second scene really inspired me,” he said.

Raised in a musical family — his dad played keys for an American Bandstand-style one-hit-wonder called Bob Kuban and the In-Men; his mother sang and did voiceover work — he played piano lessons under duress as a kid, and later picked up guitar, then accordion. Roland started writing songs in middle school, always with the idea of a specific recipient. He’d come up with tunes for school, friends’ birthdays, themed events, or family gatherings. The romance of messaging through song made perfect sense to Roland, long before he thought of turning it into a business.

In fact, it was his friend and sometime collaborator Marie Chang who helped turn an avocation into a bona fide enterprise. Chang is an accountant in real life, but she also tap dances and writes children’s books — most recently a cookbook called Crumbs on My Face — and she enjoyed dressing in elf suits to perform for strangers. She helped Roland set up the Tin Can website and figure out a business plan, though ultimately she had to drop out, owing to the constraints of her day job.

For the past few months, Roland has run the operation by himself, attracting clients through the website, amassing details about their loved ones, and typing out songs on sepia-toned parchment, with, yes, an actual typewriter. (Every telegram recipient gets to keep a print edition of his or her telegram in a hand-stamped tin can.) He’s sung a happy birthday ditty at a children’s party, performed for a teacher in a fifth grade class (at the behest of the teacher’s girlfriend), and waited for ten minutes inside the bathroom of someone’s home to jump out when he heard a key turn in the front door.

The gig last Thursday was comparably easy. Roland had been assigned to sing for the sifu of a Kajukenbo martial arts class at 57th Street and San Pablo Avenue. At five minutes to eight, he hoisted the accordion on his back and strode over. He looked dapper: wool derby hat, long black scarf, waist coat and vest, septum piercing, leather Stacy Adams shoes. (“Enough telegrams and I’ll get some spats,” he’d joked earlier.) Roland’s face was a study in self-possession as he tried to memorize the words of the parchment telegram, which he’d surreptitiously clipped to the top of his accordion. The yellow orbs of streetlamps shone brightly against a squid-ink sky; the air was brittle and clear. A woman sauntered by in high heels, raised her eyebrow at Roland, and offered a polite nod. He smiled back, nervously.

It almost goes without saying that the telegram was a rousing success, even though Roland flubbed several of his lyrics (not obvious to a casual observer), and even though he walked in not remembering whether he’d left his cell phone on the news rack in front of Godspeed across the street (it was safely concealed in his pocket). From the moment he waltzed in, leaping between students in their baggy karate uniforms, shouting “Singing telegram for Sufi Sonya!” he had to cast all those small perturbations aside. The students cheered. There were about twenty of them, and they’d all pitched in to buy the telegram as a goodbye gift for Sufi Sonya, who looked genuinely surprised. But she took it swimmingly.