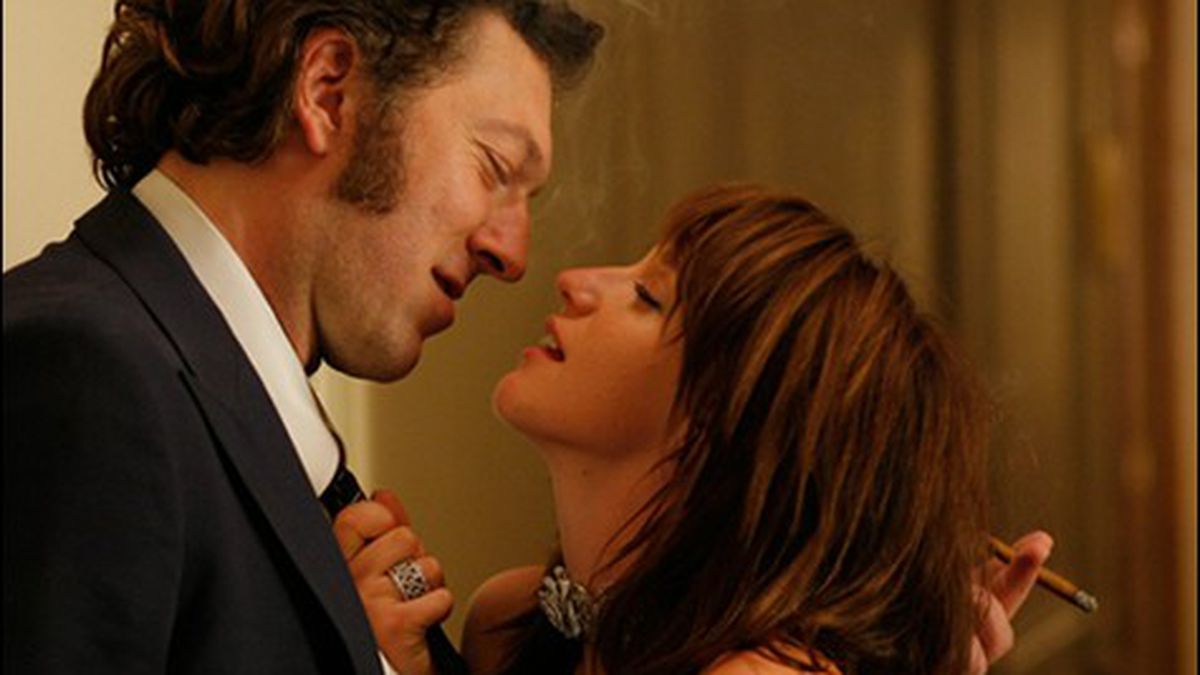 Jean-Michel Basquiat: The Radiant Child, tagger-turned-art-superstar, is an outlaw, too.

It’s his kisser. As a leading middle-weight contender in the Transatlantic Anti-Hero Sweepstakes, Vincent Cassel‘s unlovely face has been a strange meal ticket for the 43-year-old French actor. Too lower-class/rough-trade to ever make a romantic leading man, yet too fashionably brash to be consigned to goonish character roles, Cassel fits into the slot where Gérard Depardieu, Yves Montand, and Jean Gabin made their names — the rugged French street thug gone uptown. That is, he can kill you with his saber-like verbal wit or by hitting you over the head with a chair, but either way he’s going to kill you. Women cannot resist Cassel, even though he looks like he needs a bath. His sneer should win prizes. What a punim.

Jean-François Richet‘s Mesrine: Killer Instinct and Mesrine: Public Enemy No. 1 — the two-part story of Jacques Mesrine, France’s legendary outlaw of the Sixties and Seventies, seems tailor-made as Cassel’s breakthrough role. And it certainly shows off the violent, sexy, insolent, trickster-ish side of the actor’s toolkit.

Essentially, the real Jacques Mesrine — he insisted it should be pronounced “May-reen,” not “Mez-reen” — was the Gallic John Dillinger, a bank robber, holdup man, and kidnapper who claimed to have killed 39 people, mostly flics and stool pigeons. His adventures took him from an army posting in Algeria to Canada, the US, and points all over Western Europe, before being gunned down by police in a Paris suburb in 1979.

By all accounts a vicious, vindictive, hot-tempered type, Mesrine stroked his ego by carefully following his press clippings, and fancied himself a political terrorist in the same vein as the Baader-Meinhof gang in Germany and Italy’s Red Brigades. He boasted no prison could hold him, but stayed in stir long enough to write a best-selling autobiography, L’Instinct de mort (Killer Instinct). Punk rockers and filmmakers naturally idolized him even though he was a creep, a true one-man crime wave.

Killer Instinct plods a bit while establishing Mesrine’s early exploits: Algiers, breaking-and-entering jobs, the stabbing execution of a pimp named Ahmed, his romantic trip to Spain, knocking over the odd casino, etc. The visibly aging Depardieu makes a succinct appearance as a crime boss named Guido. Part One really kicks into gear when “Jacky” and his girlfriend Jeanne Schneider (Cécile De France) lam to Montreal and he meets a Quebec freedom fighter (Roy Dupuis) with a common interest in automatic weapons. Director Richet’s montage is fast and brutal: shootouts, car chases, busted on an Arizona highway, a monumental prison break followed by a break-in to free his pals (Mesrine evidently always kept his word), and an amazing array of disguises. Lots of guys with mustaches.

As Part Two, Public Enemy No. 1, opens, the slippery Mesrine is back in France playing a fairly repetitive game of hide and seek with the cops, all the while abducting rich men for ransom. Now accompanied by a poule de luxe named Sylvie Jeanjacquot (sexpot Ludivine Sagnier from The Girl Cut in Two and Swimming Pool) and his prison buddy François Besse (Mathieu Amalric), Mesrine bounces in and out of jail, pausing here and there to make fun of judges in courtrooms. He loves reading about himself in the newspapers, and is unhappy that Chile’s General Pinochet knocked him off the front pages. When he robs a bank, he declares: “I’m just stealing from a bigger thief than myself.” Further, he claims he wants to “tear down the system,” and forms an alliance with a leftist hood named Charly Bauer (actor Gérard Lanvin) after kidnapping a notorious landlord. And so on and so forth. He’s a baaad boy.

We begin to wonder if all this is actually worth two whole feature films. After all, director Uli Edel managed to encapsulate an entire stressful era of German history into one film, The Baader Meinhof Complex. Ditto the Red Brigades period — plus a lot more — in Marco Tullio Giordana‘s The Best of Youth. The problem with multi-part movie epics is that so few of them are able to sustain their epic-ness for the full distance; for instance, Steven Soderbergh‘s Che. In any performance five hours long, there are going to be peaks and valleys.

The valleys in both Mesrine pics come as a result of delineating each and every crime he ever committed. Perhaps Richet and fellow screenwriter Abdel Raouf Dafri (he wrote this year’s superior crime movie A Prophet) felt the need to pay proper tribute to Mesrine and his era, and didn’t have the heart to cut out a few of his notorious capers. In that case, they should go back and watch some old movies by Raoul Walsh or Phil Karlson or Don Siegel, just to see how much emotion, as well as characterological detail, can be packed into a ninety-minute film about a man with a gun. Cassel and his ugly mug are a terrific foundation for a crime film all by themselves, and Mesrine’s life was one long, thrilling act of defiance. But Richet & Co. may be guilty of trying to pack the entire world into a magic bullet.

A few hasty notes on Tamra Davis‘ worthwhile biographical documentary Jean-Michel Basquiat: The Radiant Child: It delves deeply into the late painter’s processes, especially his background as a Brooklyn-born graffiti tagger from a middle-class family (Puerto Rican mother, African-American doctor father) who, in the words of one talking head, “translated street energy into high art” with his much-imitated canvases. Basquiat, who died from a heroin overdose at age 27 in 1988, was one of the last of the red-hot media-sensation art superstars to derive inspiration from such 20th-century sources as Maurice Ravel’s Boléro and the bebop jazz of Charlie Parker — he painted to their sounds.

Basquiat’s work was self-consciously intellectual, and he never forgot that he was black. Rather, he was never allowed to skip it. He painted words as a talisman, a catalyst that let him “talk to” art history in his work in an instantly accessible way that wowed everyone from Julian Schnabel (one of the talking heads) to Andy Warhol, with whom Basquiat collaborated on a unique series of paintings. Fame ultimately wore him down, but we can see Basquiat’s influence all around us, on factory walls, in museums, and in Ms. Davis’ adoring doc.