An all-star cast including Ian McKellen and Patrick Stewart bring one of Harold Pinter's masterpieces, No Man's Land, to life. 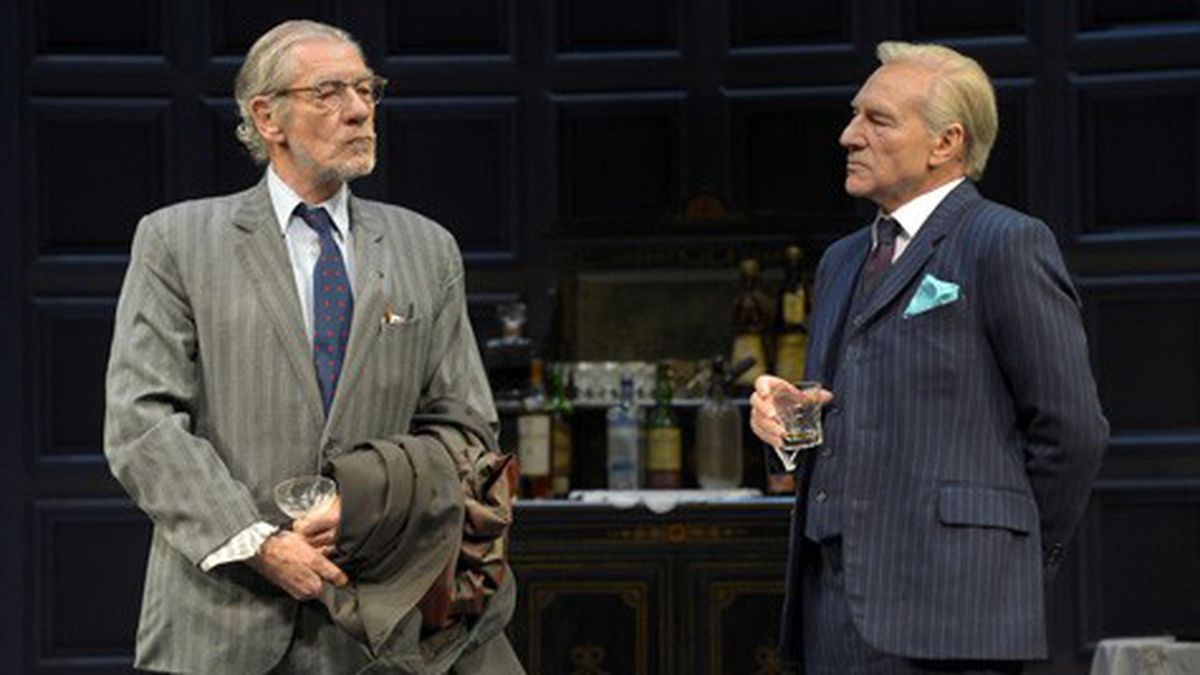 “You know what it’s like when you’re in a room with the light on and then suddenly the light goes out?” asks one character midway through Harold Pinter’s No Man’s Land, now in production at Berkeley Rep. “I’ll show you. It’s like this,” he says, triggering the sudden blackout that ends the first act.

It’s one of few such stage flourishes in a production that trains its focus squarely on its actors — not a surprising decision, given an all-star cast of Ian McKellen, Patrick Stewart, Billy Crudup, and Shuler Hensley. What may look like a drawing room play on the surface, however, turns out to be anything but a conventional psychodrama. No Man’s Land is Pinter at the height of his renowned, postmodern-leaning powers. It’s a difficult play to pull off.

Where a lesser cast might be sent adrift by the playwright’s riddling dialogue and elliptical turns, these heavyweights set firm ground for one another. Under the direction of Sean Mathias, they manage to give solidity to some of the more slippery characters Pinter has produced, and sufficient levity to a text that, while funny throughout, is ultimately far from a comedy.

The curtain draws to reveal two old men, Hirst (Stewart) and Spooner (McKellen) — a gentleman and a tramp, respectively. The former sits frozen in an armchair, locked into a haunted stare, while his garrulous guest, dressed in a shapeless gray suit and sneakers, merrily weaves through topics philosophical, sentimental, self-aggrandizing, and suggestive. Several highballs into this routine, Spooner finally pauses, reflectively. “Perhaps it’s about time I introduced myself,” he says. McKellen’s comedic timing is impeccable.

But soon after we’ve filed away Spooner as a mooching stranger, Hirst reemerges in a spiffy three-piece suit, temporarily demon-free, and begins reminiscing with Spooner as an old friend, exhuming stories of rivalry and betrayal from their Oxford days. Typical of Pinter, the truth belongs to whoever gets to do the talking, which means it’s never really in the audience’s possession.

McKellen plays the tramp — a professed poet — beautifully, drawing his speech into a more or less continuous babble, peppered with pretentious pronunciations (“Pernod” and “terza rima” receive luxuriously rolled “r”s) and a vocabulary as elevated as it is dirty (we get the pleasure of hearing McKellen speak of an old lover’s “predilection” for “consuming the male member”). He is perpetually arching, hunched over or cradling himself — any posture but upright. At one point he performs with vaudevillian skill the feat of pouring scotch into two tumblers tucked into his arm while juggling a hat and coat. Occasionally he lifts his pant leg to reveal a white sock and calf — a strangely indecent-looking gesture.

If Spooner is comedic pathos, Hirst is, with the exception of one noteworthily animated exchange, sheer gravity. He lobs a glass at his unwelcome guest at one point, collapses to his knees on several occasions, and voices megaton lines like “No man’s land … does not move … or change … or grow old … remains … forever … icy … silent.” Whenever Stewart’s booming voice pierces the shell into which his character tends to withdraw, the stage is unequivocally his. Stewart’s grip is startling; frankly beyond description.

The two younger men play Foster and Briggs, intimidating creatures who present themselves, vaguely, as Hirst’s “secretaries.” Skeptical of and hostile toward the visitor, Spooner, the manic Foster (Crudup) and goon-like Briggs (Hensley) are a volatile addition to the older pair’s already precarious chemistry. Dressed in overtly Seventies costumes and speaking in heavy cockney accents, they also disrupt this production on the narrative level, contrasting stridently with Hirst’s timeless gentility and Spooner’s equally timeless dishevelment.

In staging this genre, there is always a question of how grim to go — of where to set the fulcrum beneath “gallows humor.” The lights certainly dim in this production, literally and figuratively, as the play draws to its close. We catch up to the scenic design that from the start establishes the imagery of a late autumn wood: shadows of bare-limbed trees behind the drawing room and dried leaves blown against the stage at the wings. What’s important is that the actors remain piercingly alive even in their enactments of the characters’ most desperate moments. In this regard, it’s hard to think of a better group with which to be existentially ensnared for an evening. &#8;

An all-star cast including Ian McKellen and Patrick Stewart bring one of Harold Pinter’s masterpieces, No Man’s Land, to life.